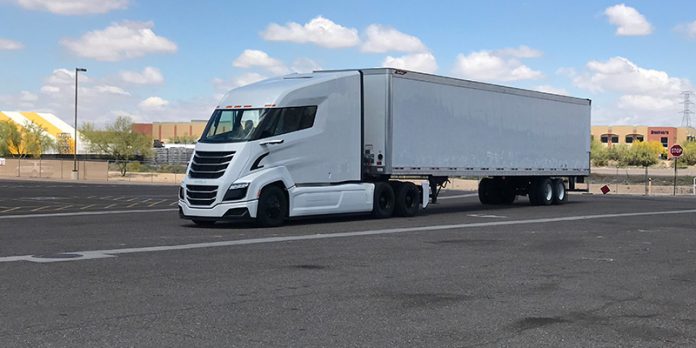 Nikola Inc. took a major step forward to getting its electric and hydrogen fuel cell heavy-duty trucks on the road last week.

The company said pre-orders for its trucks now represent more than $10 billion in potential revenue. Nikola shares, traded on the Nasdaq under the NKLA ticker, are at about $34, giving the company a market value of about $1 billion.

Nikola also said it signed a $30 million deal to purchase from Nel ASA 85-megawatt alkaline electrolyzers to build its five initial hydrogen truck filling stations. The stations will have an 8 ton per day hydrogen production capacity.

Trucks.com caught up with Mark Russell, Nikola’s chief executive, to talk about the future of the company. Here is an edited version of that conversation.

How does becoming a stock market listed company help Nikola?

It helps in several important areas as it relates to our company growth strategy. Now that our books are fully open for the world to see, our customers, partners, investors, employees, and even potential new talent can now make an educated decision about our value as a company.  This transparency shows that we are who and what we say we are, that we are built on a solid foundation and we are poised to deliver on the bold vision that we drive toward every day.

From an execution standpoint, it accelerates our ability to get our trucks into production in Ulm, Germany, which is scheduled to happen in 2021.  This will be the first full-production, all-electric, zero-emissions semi-truck assembly line in the world.  Building out the hydrogen fueling infrastructure and breaking ground on our Coolidge, Ariz., manufacturing facility are two additional benefits.

Nikola will prove to be one of the greatest success stories. Going public will hopefully share our story more broadly and serve as inspiration for others to follow their dreams, knowing that it is in fact possible for one company to change the world for the better.

Do you plan to tap the capital markets in the near term?

Nikola has sufficient cash on hand to fund the company’s R&D, greenfield manufacturing facility as well as the rollout of initial hydrogen stations. However, depending on the demand and liquidity for Nikola stocks, the company may consider tapping the capital markets.

Does it make sense to be diversified offering fuel cell and battery-electric heavy-duty trucks, but also smaller electric watercraft and all-terrain vehicles?

Our work on smaller vehicles in various formats has directly benefited our development of Nikola’s heavy-duty truck platform, drivetrain and software.  This platform is the global basis of all three truck models—One, Two, and Tre—in both battery electric vehicle and fuel cell electric vehicle configurations.

Nikola World, your annual conference was planned for the fall, given the Covid-19 pandemic do you expect that to still be a physical event at your headquarters?

Due to COVID-19, there is currently a lot of fluctuation in event dates and a large number of them are contingent upon one another.  Given the level of uncertainty, a formal announcement will be publicly made once the data have been confirmed.

Nikola says it has advanced chemistry that doubles the energy density of batteries. When do you plan to demonstrate that technology?

Our advanced chemistry battery is still in the lab R&D phase and requires further validation and development.  It will not in any case be available for our first generation of vehicles.

What is the outlook for both the electric and fuel cell truck market?

governments that have established mandates to increase the percentage of zero-emission vehicles, or which have established outright bans on fossil-fueled vehicles, over a defined time period, or by a certain date.  We see no evidence of either of these trends reversing, or even flattening in the foreseeable future.

How much of the battery-electric and the fuel cell Nikola trucks will share components?

Our base global electric vehicle platform will be common for all of our trucks, with only very slight differences to comply with the differences between EU and US regulations regarding headlights and mirrors, for example.  BEV versions will have bigger batteries.  FCEV versions have smaller batteries but have fuel-cells and on-board hydrogen storage for longer range.

Does a high percentage of shared components reduce development and manufacturing expenses?

Absolutely.  That is our goal.

Are you working with other vehicle manufacturers to build a hydrogen filling station network?

Nikola helped found and was recently elected co-leader of a global industry consortium that is establishing common infrastructure standards for fast fueling of heavy-duty vehicles. It includes global leaders such as Toyota, Hyundai, and Shell.  In addition, Nikola is an active member of several industry associations, including the California Hydrogen Business Council, Hydrogen Council, Fueling Protocol Consortium and many others where other heavy-duty truck OEM’s participate.  We are all working together to find effective ways to build a common hydrogen fueling infrastructure around the world, so there are no issues of compatibility and standardization for customers.

Nikola Motor Co. said Tuesday that it achieved a landmark breakthrough in battery technology that could double the range of electric vehicles without adding any weight.

Assessing the Fallout From the Coronavirus Pandemic – Car Pushers Market...