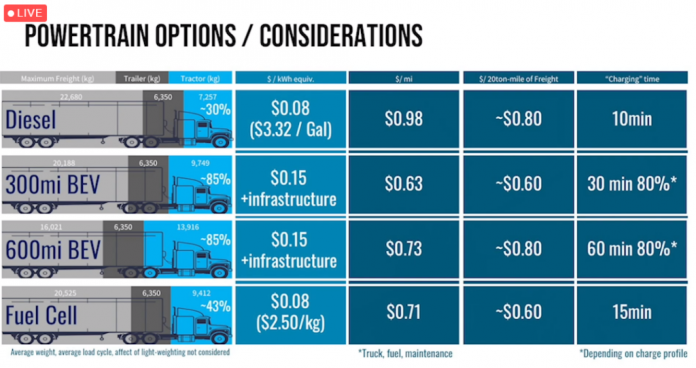 That’s why Nikola Motor Company is pursuing both technologies for the semi-truck market. In a presentation during the Heavy Duty Manufacturers Association’s Heavy Duty Dialogue, Jason Roycht, Nikola’s v.p. technology development and strategy, said both technologies will have their place.

“It is possible to replace diesel with zero emissions,” Roycht said. But diesel is a formidable fuel and the internal combustion engine comes with advantages such as fueling simplicity, energy density, and low weight compared to batteries.

A diesel powertrain weighs about 3,000 kgs (6,600 lbs), Roycht pointed out. To put the same energy aboard a Class 8 truck using batteries that achieve the same range would add nearly 5,000 kgs (11,000 lbs). But for longer hauls where range is important, fuel cells can be installed on a truck weighing roughly the same as the diesel engine they replace.

“That gives us a lot of potential to move those freight ton miles in the same way with a fuel cell,” said Roycht.

Nikola plans to launch both battery electric and fuel cell electric Class 8 trucks, but Roycht said the BEVs are better suited for daily ranges of about 300 miles (480 kms). In 2021, Nikola says it will launch the Tre BEV with a range of up to 300 miles and it will follow that in 2023 with the Nikola 2 fuel cell electric vehicle with a range of 500 to 600 miles (800 to 960 kms) for longhaul applications.

To compete with diesel, those trucks will have to offer comparable or better total costs of operation, Roycht acknowledged. Diesel, at US$3.30/gallon produces energy at a cost of about 8 cents per kWh (kilowatt hour). Nikola hopes to provide hydrogen at a cost of $2.50/kg, matching the 8 c/kWh cost of diesel, while BEVs cost about 15 c/kWh to power.

But BEVs and fuel cell trucks will also reduce maintenance costs on components such as brakes and eliminate the need for engine lubricants.

Fueling time is another consideration. To fuel a diesel truck takes about 10 minutes, while a BEV with 300-mile range will take about half an hour to charge to 80% of its capacity. A fuel cell electric truck can be fueled in about 15 minutes, however.

The big stumbling block for hydrogen is that it’s not yet readily available. Nikola plans to develop the required hydrogen fueling network along routes its customers travel.

“What we plan to do is integrate the hydrogen production and fueling into stations tied to the leases of our trucks,” Roycht explained. For example, Anheuser-Bush has agreed to purchase several hundred hydrogen fuel cell trucks, and Nikola says it will build fueling stations along the routes those trucks will be deployed on.

“We know exactly where to put that station and where it’s going to be used at high efficiency,” Roycht said. “When we know where to put them, it’s very capital efficient. We don’t have to build in hopes vehicles will come to fill – we are building tied to vehicle use.”

Nikola plans to use renewable energy sources, and break it down via electrolysis into hydrogen and oxygen. The hydrogen will be compressed for fueling and 2 mWh will be put into the truck by the driver using a process similar to filling with diesel.