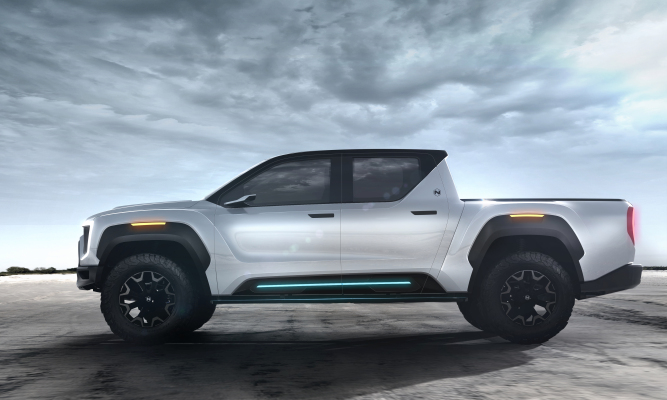 Nikola Motor, the Arizona startup that made its debut as a publicly traded company June 4, will open up reservations later this month for a hydrogen fuel cell electric pickup truck that was designed to compete with the Ford F-150.

The company’s initial focus has been to design, develop and eventually produce hydrogen-electric Class 8 trucks and build out hydrogen station infrastructure throughout North America. Since its founding in 2014, the company has expanded its hydrogen-electric vision to powersports and more recently to pickup trucks. The company shared in February the first details about the Badger pickup truck, which will be available as a battery electric or fuel cell vehicle.

Nikola Motor has not produced any products yet. It doesn’t even have a factory. The company is building a factory in Coolidge, Arizona. The site has been cleared and construction will begin in 2020, Milton told TechCrunch in a recent interview, adding that he hoped for it to start this summer.

Against that backdrop of bold vision but no products — or even revenue — Nikola Motor is valued at $28.63 billion as of market close Tuesday. Nikola’s market capitalization eclipsed Ford at one point Tuesday.

I’ve wanted to say this my whole adult life; $NKLA is now worth more than Ford and FCA. Nipping on the heels of GM. It may go up or down and that’s life but I’ll do my part to be the most accessible and direct executive on Twitter. Others will follow.

Nikola became a publicly traded company through a reverse merger with VectoIQ, a publicly-traded special purpose acquisition company led by GM’s former vice chairman Stephen Girsky. Since its June 4 debut, the stock has had a short volatile ride, trading at more than 112% higher than its debut price of $37.55. Shares closed Tuesday at $79.73.

“We went directly after the Ford F-150 market and it’ll be a direct competitor to the Tesla Cybertruck as well,” Milton told TechCrunch.

Milton said the pickup truck won’t compete with Rivian, which is also planning to produce an electric pickup truck.

“The Rivian is a small truck like a Toyota Tacoma and will not compete in the construction world nor the Ford F 150, bigger pickup market that’s focused on home businesses construction and things like that. The Rivian is more of a consumer model that is used for outdoor recreational activities.”

The Badger has some eye-popping specs, including up to a 600-mile range, 906 horsepower and 980 pound-feet of torque, according to Nikola Motor. The battery electric version will be able to travel 300 miles on a single charge and can be upgraded with fuel cells to double the range. The company expects the Badger to go into production in 2022.

But Nikola doesn’t plan to produce the Badger on its own, according to Milton. Instead, the company plans to partner with an OEM, which Milton said will be revealed later this year.

I wanted to post something no one has seen. @nikolamotor badger pre-production interior CAD. Notice the floor mounting system? It’s throughout the truck and made to secure any loads within the vehicle safely. See quality of everything – waterproof. Hidden Fridge too:) pic.twitter.com/EttmrOuqA4

Kevin Dotson is out here pulling trucks getting ready for the...

New US Army infantry vehicle is basically a Chevrolet Colorado