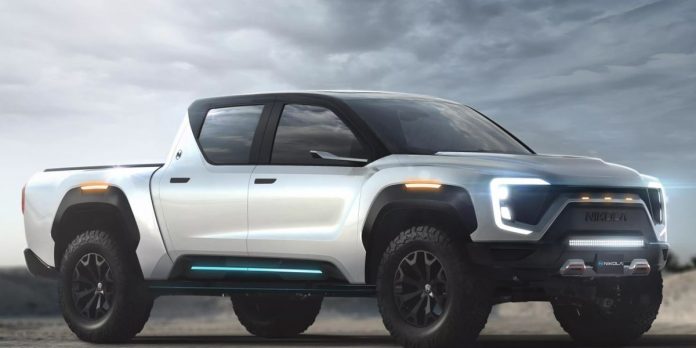 The same week that Tesla stock reached an all-time high—surging 35% a month after Elon Musk tweeted that the company’s stock price was “too high” and making the company the world’s most valuable automaker—another Nikola Tesla-inspired EV startup has surpassed the market caps of numerous established automakers.

That startup is Nikola, an aspiring EV truckmaker, and it made news earlier this week when its shares doubled in price and then surged upward a little more for good measure. At the close of trading on Tuesday this week Nikola was valued at $28.799 billion, surpassing Ford’s own valuation of $28.794 billion.

The issue with this scenario (permitted that one accepts this as an issue at all) is that Nikola has not started production of its intended electric trucks and currently has no revenue.

But the stock rally earlier this week appeared to be sparked by the announcement of the impending opening of reservations for its planned pickup truck, which, along with similar pickups planned by Rivian, Bollinger, Tesla, Lordstown, Hummer, Ford and probably a few others we’re forgetting, are promised to debut at various points in the future. Nikola’s pickup will be called Badger, and it will be revealed in the metal later this year after reservations open on June 29.

Nikola will begin accepting reservations for the Badger later this month.

The Badger, announced earlier this year, is planned to be offered both as a battery-electric truck and as a BEV with a hydrogen fuel-cell system. The pure-BEV version is expected to offer a range of 300 miles on a full charge, while the hydrogen version will offer double that … assuming you live somewhere close to a hydrogen station. To address this admitted deficiency, Nikola plans to build hundreds of them in the coming years.

Nikola’s Tre semitruck, on the other hand, currently appears a little closer on the horizon than Tesla’s model. At least it looks more realistic.

In late 2019 Nikola, along with partner Iveco, unveiled a functioning and very realistic-looking prototype based on the Iveco S-Way that will feature a 720-kWh battery, giving it a range of 248 miles and 644 hp and 1,327 lb-ft of torque. The truck will be aimed at fleets that make daily deliveries within a given geographic area, as opposed to long-haul runs over irregular routes.

Obviously, Wall Street has been bullish on electric vehicles for a long time, which is how Tesla has been able to become the world’s most valuable automaker, eclipsing Toyota, despite not having had a profitable financial year to date. Putting Wall Street enthusiasm aside and disregarding just what market capitalization actually reflects, there are some important unanswered questions about electric pickup trucks and electric semitrucks that investors should, ideally, be asking.

First, amid fuel prices that are partying like it’s 1999 and unemployment levels that would cause FDR to flinch, demand for electric pickup trucks remains unproven. It’s one thing to sell luxury sedans and crossovers to early adopters with deep pockets, and quite another to court an audience that is, for the most part, not made up of early adopters with deep pockets but people who may have never even seen an EV charging station, because it’s hundreds of miles from where they live.

Second, as it concerns semitrucks, commercial fleet operators for day-cab truck fleets such as the ones that make deliveries to big-box stores also have to contend with costs—it’s an industry where saving pennies matters—and despite a few deals that have been struck with such fleets the EV industry has yet to make the case for EV semitrucks on a wider level.

One of these questions could be: If electric semitrucks are not going to be cheaper to purchase than a current diesel day-cab truck, at what point will the fleet operator break even, given the charging stations for these trucks that will also have to be installed? The ability to provide specialized roadside service to these trucks is also a part of the decision-making process for semitruck fleet buyers and requires its own considerations. The budgets of fleet purchasers, amid a historic pandemic that has generated a tsunami of retailer closures and will continue to generate more of them, as well as environmental deregulation, should also give investors some food for thought. What exactly is the outlook for commercial fleet operators that use any kind of semitrucks at the moment?

All of these questions will, hopefully, be asked by Wall Street at some point, as the consumer auto market and big businesses that require daily deliveries of cargo are poised to endure a once-in-a-generation correction.