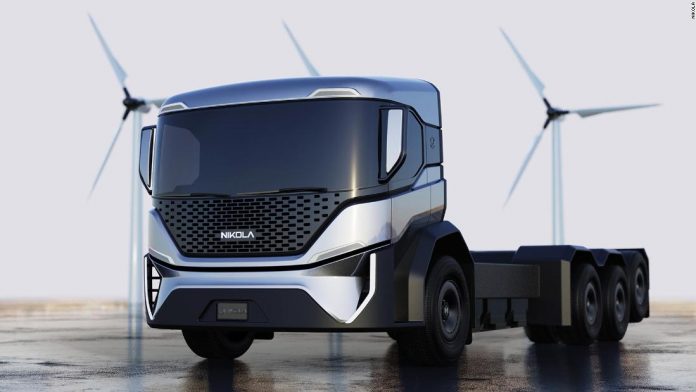 Investors were undeterred that the actual truck hasn’t been built yet, and it’s unclear exactly what it will look like. A rendering of the truck’s cab, which both companies shared with CNN Business, does not include the large rear compartment where trash or recycling would be stored. Nikola will also have to prove to Republic Services that the truck meets requirements such as sufficient range, and passes lifecycle tests in different climates. Arizona-based Republic Services says that it has more than 36,000 employees who serve 14 million customers nationwide.

Nikola is one of several electric vehicle companies that have drawn attention recently as investors bet big on electric vehicles. Nikola is developing a tractor-trailer rig, as well as a pick-up truck. Nikola says the pickup, called the Badger, will have a total of 600 miles of range.
The startup’s stock has been volatile since being listed on the Nasdaq exchange through a reverse merge this year. Its price surged 103% on a single day in June, and has been valued at more than Ford and Fiat Chrysler, despite not selling a single vehicle yet.

The agreement announced Monday stipulates that Nikola will sell Republic Services 2,500 trucks to join its existing fleet of 18,000 mostly petroleum-powered vehicles. The fleet includes several thousand vehicles that rely on natural gas. Testing is scheduled to begin in 2022, with vehicle deliveries scheduled to begin in 2023. The truck is expected to have 150 miles of range, which Republic Services president Jon Vander Ark said would be enough to last for a day. The deal could expand to 5,000 trucks over time.

Republic Services set a goal last year to reduce its greenhouse gas emissions by 35%. But the company expects the truck will make good business sense, too.

“There’s going to be value for our shareholders over time,” Vander Ark told CNN Business. “I”m most excited about my kids and grandkids, I think we’re leaving the world a cleaner place for them.”

Republic Services said in a news release it expected significant operations savings, but Vander Ark declined to offer specific details as he said the savings needed to be proven out.

The Nikola truck will weigh more than a traditional garbage truck due to its batteries, though Vander Ark declined to say how much heavier he expected the trucks to be. Vander Ark said weight exemptions would be needed in many states so that capacity on the truck isn’t lost. Governments place weight restrictions on roads to limit wear and tear on roadways.

Health Department responds to report that bodies were transported to morgue...