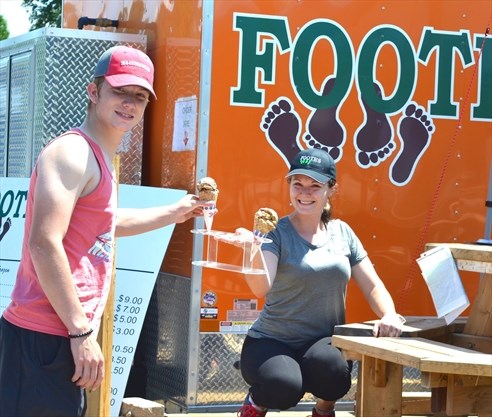 NIPISSING VILLAGE – With a variety of takeout food items and many flavours of Chapman’s ice cream, Foote’s Food Truck is seeing an increase in customers as pandemic restrictions ease.

“We’ve been lucky in that we have been able to maintain our client base and now we’re seeing more people stopping in, especially in this hot weather,” said Shelly Foote.

The food truck, located at 2633 Highway 534, adjoins the Foote’s Convenience Store and is operated by Shelly’s “little brother Chris.”

“Chris was almost finished his first year of culinary school when our father was diagnosed with cancer,” she said. “He left school to come back and help and the food truck came as a result of that decision.”

Although this type of cooking may not have been Chris’s game plan, she says he’s “very happy” with how it’s turning out, and “he’s gaining more customers all the time.”

“The food is always good. You’re never disappointed with what you order,” said one customer who came from North Bay to pick up a Canada Day takeout lunch.

Menu items include chip truck classics, burgers, fries, and poutine, but Chris is also starting to use some of that culinary training in expanding the menu with items like his own sausage patty on a bun.

And don’t forget the ice cream. On Canada Day Foote’s was offering 13 flavours of Chapman’s ice cream in cones, waffle cones or cups, which was a lure for Jacob Nickless of Cambridge, in Nipissing visiting with family.

“The peanut butter ice cream in a waffle cone was more than I could resist,” he said.

Foote’s Food Truck celebrated its first anniversary in May and has plans to be open all year round.

Currently Chris is waiting to get railings installed and then he will be able to open his large patio. Customers are currently asked to social distance and observe the protocol signage.

Details on Foote’s Food Truck are on the Foote Convenience Store Facebook page.

Please note: the takeout truck takes cash only, but there is a cash machine in the adjacent store.