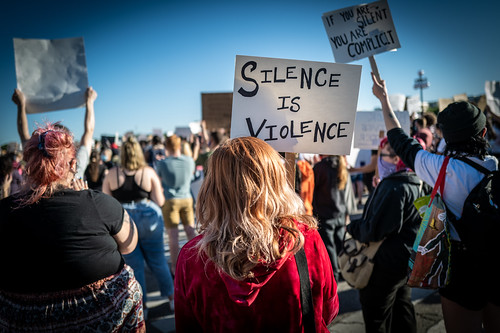 Protests continue in Minnesota and across the U.S. over the death of George Floyd, the unarmed black man who died while detained by police in Minneapolis.

There were stark contrasting images nationwide between police and demonstrators this weekend, with one officer hugging a visibly upset black youth, while multiple videos showed police pushing protesters.

Other videos showed the use of pepper spray and rubber bullets, a police officer shoving down an elderly man, police cruisers pushing protestors back and a police horse trampling a woman.

A Michigan sheriff joined protesters in Flint Township on Saturday, putting down his weapon and saying, “I want to make this a parade, not a protest.”

Chris Swanson spoke with demonstrators who were met by police officers in riot gear.

“The only reason we’re here is to make sure that you got a voice. That’s it” Swanson said in video clips shown on Twitter.

There were more arrests in Minneapolis because of a curfew.

More than 150 people were taken into custody Sunday.

The Minnesota Department of Public Safety says there’s been 362 similar arrests since the curfew was issued Friday.

Authorities are reporting finding incendiary materials and accelerant’s such as water bottles filled with gasoline hidden around various neighbourhoods.

A couple of fires were reported Sunday, unlike Friday night when there were 20, including nine structural fires.

A 35-year-old truck driver also remains in custody on a charge of assault after a tanker truck drove through demonstrators gathered on a freeway in Minneapolis.

Fortunately, no major injuries were reported.

Meantime, the children of George Floyd are pleading for peaceful protests around America.

They say while they appreciate the support shown, they’re also urging protesters to avoid violence.

(With files from Randy Thoms and Geoff Waterfield)

This Mean Pickup Is A South African Battleaxe