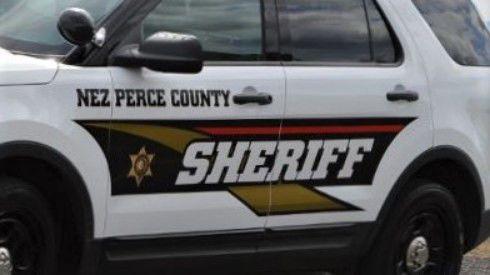 LEWISTON – On Thursday, July 9, at approximately 2:35 pm, the Nez Perce County Sheriff’s Office received a call of a non-injury accident involving a logging truck that had flipped over, dumping logs onto the roadway. Reports stated this was in the area between 6th St Grade and Barr Grade on Tammany Creek Road, in Lewiston.

Upon Deputies arrival, the accident scene was found at mile post 7.9 on Tammany Creek Road. The logging truck, being driven by 72-year-old Gene Stewart, of Culdesac, was northbound and attempting to negotiate a curve in the road. The log truck was going to fast into the curve, which caused the pup-trailer to cross the center line and start to lean over. The pup-trailer eventually turned onto it’s side, spilling the logs onto the roadway.

At the same time a Chevy pick-up truck being driven by 76-year-old John Dalton, of Lewiston, was southbound when the logs came off of the trailer and rolled into the front of his vehicle as he came to a stop, causing damage to the front end.

As a result, the roadway was closed for about 4.5 hours.