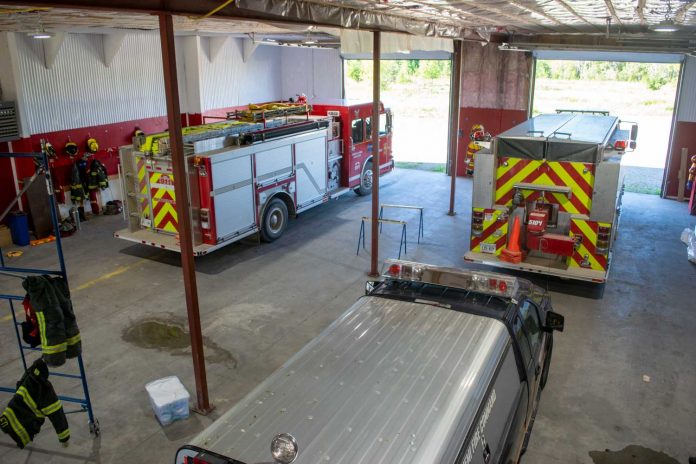 LITTLE CURRENT – The Northeast Town Fire Department has moved into a centralized fire hall at 88 Vankoughnet Street East at the eastern border of Little Current as of this past June, expanding into a building more than three times larger than the former space that can house the entire fleet, is more functional and accessible for crews and visitors.

The larger space (roughly 6,000 square feet, up from the former hall’s 1,650 square feet, said Mr. Deschamps) is only partly finished inside, something the fire chief called an asset because the department is able to “make it our own.”

There is office space at the front of the building, enough for a chief’s office, a separate office for officers, a meeting room and a broad hallway that will host firefighting memorabilia.

On the main floor are two washrooms, a significant improvement from the previous fire hall that had only one washroom up a flight of stairs. There will be a laundry room next to the garage that will host equipment to clean and dry the firefighters’ gear.

With the opening of this facility, the Northeast Town is consolidating its Sheguiandah fire hall with its Little Current site. The town will retain the Sheguiandah site and leave a water truck within; public works will assume the surplus space.

Mr. Deschamps acknowledged that response times might be longer by a minute or two compared to the department’s historic location in the heart of Little Current but he said the difference was negligible.

Since the fire department’s inception, it has had a fire hall at Meredith and Worthington streets in Little Current. The old hall stood since the 1800s right at the street corner, followed by the most recent building which opened in May of 1978 to accommodate the increasing space requirements of the department. That hall saw 42 years of service before the new structure took over in June of this year.

The Northeast Town also owns a large tract of land behind the new fire hall, offering ample space for training exercises. In the off-season, the ample space within the building will allow for more in-depth indoor training.

“The town is expanding and this was an opportune time to expand with the town,” said Mr. Deschamps.

A future addition to the department will be a second pumper. The town presently has one 2004 pumper in regular service as an all-purpose firefighting and emergency vehicle but will eventually add an additional truck which will be purpose-driven for firefighting. The current pumper will then move into a backup role.

Although the new building could house the new truck alongside the existing equipment, Mr. Deschamps said one of the smaller vehicles would likely be moved back to Sheguiandah.

In the old garage there was less than two feet between the trucks and the interior walls; the new space allows for much more freedom of movement and flexibility in how the crews train and operate.

Humidity has been a challenge this summer within the new hall; it is insulated and propane-

heated, making it more efficient in cooler months, but the insulation has also increased the indoor humidity in the warm season.

Mr. Deschamps said he had just ordered a large dehumidifier to temper the space.

Firefighter Chris McGaughey was visibly excited by the new hall and the opportunities it would afford.

“The scope of what we can do is damn near unlimited,” he said.

The firefighters who gathered for a photo op at the new station expressed thanks to the town’s elected officials and administration for making the substantial investment in the department.