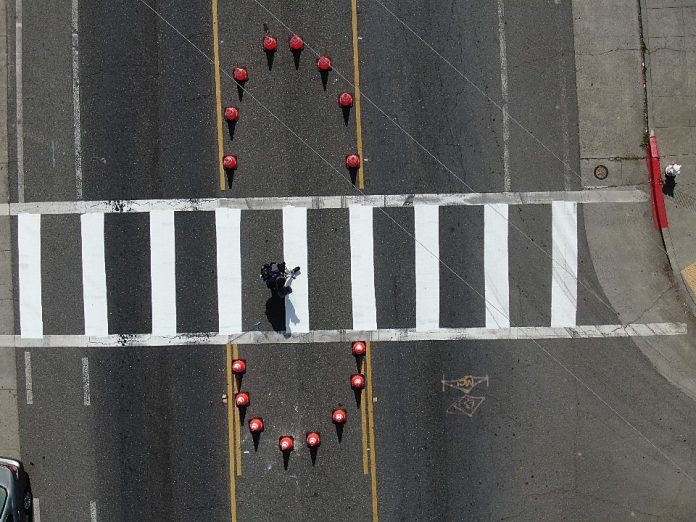 A mother of four, Clay lives a few blocks away, and the supermarket is her neighborhood convenience store. On Friday morning, she stopped at the freshly painted crosswalk at Bancroft and Avenal avenues.

Traffic cones lined the middle of the crosswalk, and signs warned drivers of pedestrians. This is the first installation of “essential places,” an offshoot of Oakland’s so-called “slow streets” program. In April, the city began closing some neighborhood streets to traffic, a move replicated by other cities across the country, my colleague John King pointed out in a recent piece.

The essential places project seeks to slow down traffic near essential services, like grocery stores. But Clay, who was walking with Jersey, a frisky Maltipoo, was unimpressed.

“We have people that ignore street signs and stoplights, so I don’t think something as simple as this is going to stop traffic,” she said. “I really think it’s a waste of money.”

I’ve enjoyed the slow streets in my neighborhood. On Saturday evenings, you can probably find me taking socially distant walks down Shafter Avenue with my neighbor Sara Hossaini, a KQED reporter, and her mother.

Slow streets are great for people who are privileged to work from home. But, areas where people are still driving to work, like in historically overlooked and poorer parts of the city, is where people really need to slow down. And the drivers on the road during the pandemic are driving faster.

“We’re picking these places based on what we know about the crash history of streets,” Ryan Russo, director of the Oakland Department of Transportation, said at a news conference Friday. “And unfortunately, just the same way COVID-19 is inequitably hitting communities, traffic crashes do the same.

“Our fatalities and serious injuries are often on streets like this and in communities like here in East Oakland.”

In October, the city released a study that analyzed almost 2,000 injury crashes from 2012- to 2016. In those four years, Oakland averaged two severe or fatal injuries per week, which cost about $900 million per year in property damage, medical bills and other associated costs. According to the Oakland Department of Transportation, just 6% of the city’s streets account for more than 60% of severe and fatal traffic crashes.

Bancroft Avenue is one of those streets.

In January, Miesha Singleton, a 40-year-old mother of seven, was killed in a hit-and-run at Bancroft and 98th avenues in front of Elmhurst Middle School. She was in a crosswalk on her way to pick up one of her children. Henry Melendez was arrested in Southern California last week in connection with the death.

After Mayor Libby Schaaf spoke at the news conference, a man in a white pickup truck who’d stopped in the turn lane began yelling at her.

“That money could’ve been spent fixing these raggedy roads,” Will Thomas yelled.

He turned into Shop Rite’s parking lot, but left the tail of his truck blocking other drivers from entering.

Thomas, who wore white coveralls and said he was raised in Oakland, had two blackened bananas on the dashboard and several masks dangling from the turn signal switch. He ranted about the crosswalk and the construction traffic on International Boulevard. He was also bitter about the NFL’s Raiders leaving Oakland.

Schaaf told him she’s heard a lot of skepticism about traffic projects in East Oakland. So have I.

Distrust of the police and city officials runs deep in East Oakland. The city is changing, and longtime residents like Lonnie Brown fear they won’t be around to benefit from the changes. He recalled when Bancroft had four lanes for vehicle traffic. But instead of the upgraded crosswalk, Brown, who proudly told me he was born and raised in Oakland, wanted to talk about the city’s history.

“I remember back in the day I couldn’t even come to East Oakland. It was all white,” Brown, 62, said. “You come past downtown Oakland, police be all on you. We was kids.”

Pamela Ferran, a senior policy adviser for Oakland City Councilman Loren Taylor, who represents District Six, told me something had to be done to slow traffic.

“People already have the sense that they’re not heard from in our city, and that we’re not thought of in City Hall,” she said. “We deserve the same kind of attention and city services that the rest of the city gets.”

Jerome Unterreiner, a senior urban designer for ZGF Architects in Seattle, thinks the slow street movement is here to stay. Earlier this month, Seattle Mayor Jenny Durkan announced that the city would permanently close 20 miles of streets to vehicle traffic.

But the movement won’t mean anything unless all people in a city benefit.

“We’re actually doing some legwork on some things that are not the boldest but a lot bolder than if we weren’t under this kind of duress,” Unterreiner said. “It’s not just about the access to the necessary things that one needs, but it’s also about thinking about the decentralization of services like health care.”

As I was leaving the news conference, I saw a white truck pull into the parking lot. Thomas was back to talk to Schaaf. This time he told her she was a good mayor.

“God told me to come back and apologize,” he said.

What you need to know today about the virus outbreak