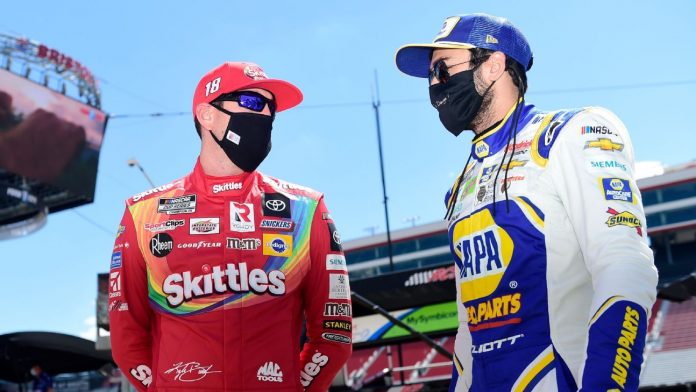 For NASCAR, the previews are over. Now, it gets real.

What the 2020 Cup series does — or perhaps what is done to it — over the next week likely will be what ultimately shapes the story of this, the strangest of seasons. And it won’t be merely the story of stock car racing’s season, but potentially every other sport that follows in NASCAR’s “back to work” tire tracks.

COVID-19 is invisible, mysterious and as yet without a vaccine. It’s a tough foe to fight, but everyone in the sports world is lining up to stare it down and return to competition. This very week, college sports facilities started opening up to their athletes. The NFL is telling its teams to plan for camp, but to keep those camps in-house. On Thursday, the NBA approved its summer camp-ish playoffs plan, to be held at Walt Disney World. The PGA Tour will return to the course on Thursday in Fort Worth, Texas. IndyCar returns Saturday night, just up the road at Texas Motor Speedway.

But NASCAR was the first among them to step into the coronavirus pandemic breach. That’s why every single one of those other sports either sent representatives to the first races back, at Darlington Raceway and Charlotte Motor Speedway, or have met with the people who oversaw those events and wrote up the plans that made them work. The authors and administrators of those plans have said that they did so while feeling the weight of those other sports leaders leaning over their shoulder.

As time has passed and race laps have been run, that pressure has not subsided. It has only increased.

Those words were spoken by a NASCAR official on May 20 as rain crashed down onto Darlington in torrents. It was the second of four Cup series races scheduled over a week and a half, along with two Xfinity Series events and a Truck series race. The weather was messing with that Jenga puzzle big time, having already postponed the Xfinity race at Darlington and threatening to delay that night’s Cup race. That forced NASCAR to play another game, a slide puzzle involving more than six dozen 18-wheelers in and out of the racetrack garage shared by both series because it had been carefully sectioned off by NASCAR and track officials to enforce pandemic-forced social distancing policies.

It felt like a mess because it was a mess. Then, it wasn’t. They figured it all out and pulled it off with seeming ease. In fact, NASCAR seemed to figure everything out during that first wild stanza of its most aggressive schedule since 1971.

The 900 people allowed into the racetracks were all checked prior to entering and nary a one brought a fever with them. Once inside, those 900 people stayed in their literal lanes, following paths taped off by NASCAR officials and staying in contact only with the 16 people in, as NASCAR refers to them, their “pods.” They also all wore their personal protective equipment.

“I can tell you firsthand that everyone did what they were supposed to do, because I never even really met my pit crew,” explained Matt Kenseth, who came out of retirement as NASCAR came out of its COVID-19 pause, replacing fired Kyle Larson in the No. 42 Chevy. “I stayed in my motor coach like I was supposed to, and when I came out, I had my helmet on and walked straight to the car. Meanwhile, they had all their gear on, the guys who were at the car, but most of them were already over at the pit box. My first pit stop, I was like, ‘I wish that guy would turn around so I could see the name on his back and see who it is!'”

Now, after a week to catch its collective face-masked breath, NASCAR begins a week that will be even more packed than that first page crossed off the post-quarantine calendar. Sunday afternoon’s 500-miler at Atlanta Motor Speedway kicks off a run of three Cup series races in seven days across three states, traveling from Atlanta to Martinsville Speedway on Wednesday night and then another Sunday affair, June 14, at Homestead-Miami Speedway.

The week has been packed with meetings and phone calls, many coming from the leaders of other sports, stick-and-ball colleagues anxious to dissect the “inches-thick” plan that NASCAR has been running through an obstacle course of state and local government approvals. The plan has become such the prototype that North Carolina government officials have been handing it to other would-be event planners as the model to follow. It was even discussed at length during a meeting between NASCAR leadership and the Department of Homeland Security, held in Daytona on May 27 (NASCAR was also lobbying to have international race car drivers added to the list of professional athletes exempt from the current travel ban).

“The discussions we have, every one have been about how we’ve managed those approvals, but really it’s been about what’s in that plan, what we’ve done procedurally,” explained NASCAR Senior Vice President & Chief Communications Officer Eric Nyquist, who prior to joining NASCAR in 2005 worked for the NFL and with the Chicago Bulls and White Sox. “They want to know about the medical questionnaires that our competitors filled out, the screening process at the track, and then keeping taps on so many moving parts, so many people working for so many different race teams.”

If you were wondering what keeps NASCAR officials up at night, that’s it: what will happen as the sport returns to action this weekend for its first events on the other side of the oft-mentioned critical 14-day window when COVID-19 is most likely to make its presence known. When Cup series crews enter the Atlanta Motor Speedway garage on Sunday, it will have been 21 days since they first arrived at Darlington.

Those 900 people, where have they been when they haven’t been at the racetrack and since it all went so smoothly over the first dozen days of racing? Will they maintain the same sense of urgency felt during the spring? Will they stick to the same level of discipline that they did during May?

Every race team contacted this week said that they have continued to stick with the same weekday procedures that they did throughout the quarantine and after racing returned, keeping the road crew separate from the shop crew, including crew chiefs. Said Chad Knaus of Hendrick Motorsports, “Of course we would all love to be doing this the way we’ve always done it, but I think we’ve really just gotten comfortable with this manner of doing business. So, yeah, no way we’re risking the guys who go to the track. I would hope that’s how everyone feels.”

But everyone — NASCAR officials, racetrack operators, and the racers themselves — all agree that it’s not a question of if someone will fail their pre-entrance health screening; it’s a question of when, who, how many and how widespread it is. COVID-19 cases were already being discovered among college athletes nearly as soon as they returned to their facilities earlier this week.

In the earliest days of the return, NASCAR purposely kept the races close to Charlotte, North Carolina, home base for nearly every competitor, to prevent travel challenges. Atlanta will stretch that bubble, but it is still a day trip for most. Homestead-Miami Speedway, Talladega Superspeedway in Alabama and Pocono Raceway in Pennsylvania are an average distance of more than 550 miles from Charlotte. That will start introducing the wrinkles of overnight travel and, if someone fails a health screening, getting their roster replacement from North Carolina to pit road in time for that evening’s race.

As those races click off and summer passes with them, NASCAR will start looking at its versions of Phase 2 and Phase 3, expanding the ring of where people can be out from the garage and into the grandstands. The next wave will be those who make their livings around the sport, such as media members, support staff, team owners, engineers and driver PR reps. Then it will be time to look at the possibility of fans in the stands, but that is likely still a long way down the road. The sanctioning body also continues to keep its eye on the possibility of at-track COVID-19 testing, though right now temperature screenings will be the norm.

If there is a reduction in stress to be found among all of this, it’s that NASCAR will soon no longer be alone when it comes to facing problems, devising solutions and collecting data. As other sports start returning to action, NASCAR can finally start learning from the steps of its colleagues. But until then, it’s still the race car at the front of the pack, hoping to hang on and keep it out of the wall while waiting on some help from behind.

“When you’re the first one out of the gate, the first one doing something like this, you have to get it right,” explained Marcus Smith, president of Speedway Motorsports Inc., owner of Charlotte Motor Speedway, Bristol Motor Speedway and Atlanta Motor Speedway. “Up to now, everyone has been really focused on making sure it’s been done right, that everyone has followed the plan. Now we need to make sure we all keep that focus. We don’t do it right and let something go wrong, then it goes wrong for everyone, not just NASCAR.”