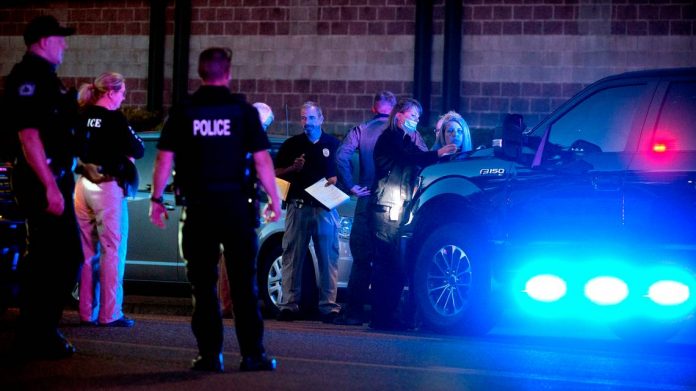 The Safeway in Tumwater and the area surrounding the Cleveland Avenue supermarket were evacuated Wednesday evening when police say an armed man threatened suicide in the parking lot and became erratic during the police response.

An officer later fired his gun toward the man, police and witnesses say, and an investigation is underway.

Tumwater police responded about 6 p.m. to reports of a man calling from the parking lot threatening to commit “suicide by cop,” according to Tumwater police spokesperson Laura Wohl. She said the man had mentioned he was armed, so officers’ plan was to try “to talk him out of the suicide” but that they were also concerned about the weapons involved.

Officers found the man in the parking lot in a pickup truck, where they realized he had “both a knife and a gun,” Wohl said. They began negotiating with the man, but at some point he began to “drive erratically through the parking lot.”

As police started getting customers out of the parking lot and store, Wohl said, officers laid out spike strips to stop the truck. An officer was approaching the truck to continue negotiating with the man when he allegedly “sped toward the officer, and the officer had no choice but to fire his weapon,” Wohl said.

The man stopped his truck, and it appeared he was injured, though she said it was not clear how it occurred. At that point, the Thurston County SWAT team began negotiations and the suspect surrendered about an hour later. Also responding to the scene were Olympia Police Department, Lacey Police Department, Thurston County Sheriff’s Office, and Washington State Patrol, Wohl said.

Medics evaluated the man and found he had “a very minor injury” to the head, Wohl said, and he was taken into custody about 8:30 p.m. She was unsure on what charges he was arrested and she did not know whether any weapons had been recovered from the man’s vehicle.

“The only thing we know about the suspect at this point is that he’s not local,” Wohl said. “We believe he’s from California.”

No officers were injured. The officer who fired his gun will be on administrative leave during the investigation, Wohl confirmed.

As of 9:30 p.m., Cleveland Avenue was still blocked near the store, and Wohl said she expected the scene to remain active throughout the night.

“Our regional independent investigation team will be spending the night documenting everything to do with the officer-involved shooting,” Wohl said.

Some shoppers who had been inside or leaving the store when the shooting occurred were still standing outside police tape at that time, with grocery carts of goods in-hand, waiting to return to their vehicles and go home.

One shopper, Tammy Bond, told The Olympian she was checking out when an announcement came over the intercom telling shoppers they couldn’t leave the building. She was near the sliding glass doors, she said, and could see a truck surrounded by police officers.

“That lasted for maybe 15 minutes or so,” she said, and it looked like an officer was trying to talk to the driver before he took off and “started driving erratically,” looking like he might have been trying to find a way out of the lot or get “some sort of attention.”

“Then he pulled on that side of the building,” Bond said, pointing east. Officers were standing in front of the door where she was standing and had a spike strip, she said. The driver took off again, swerved and it “looked like he was going to hit one of the officers,” Bond said, before the officer jumped out of the way, turned, and shot at the truck as it passed.

She heard four gunshots and the truck then drove up onto a landscaped area, Bond said, and officers moved toward the car. At that point, another announcement directed shoppers to the back of the store, and they were eventually ushered out a side door.

About 9:40 p.m., a friend came to take Bond home. But Steve Henley, another shopper in the store during the incident, said he couldn’t yet leave because his dog was in his vehicle, still in the parking lot that had become the scene of an investigation.

Cadillac To Offer Five EVs Including A Model That “Builds On...