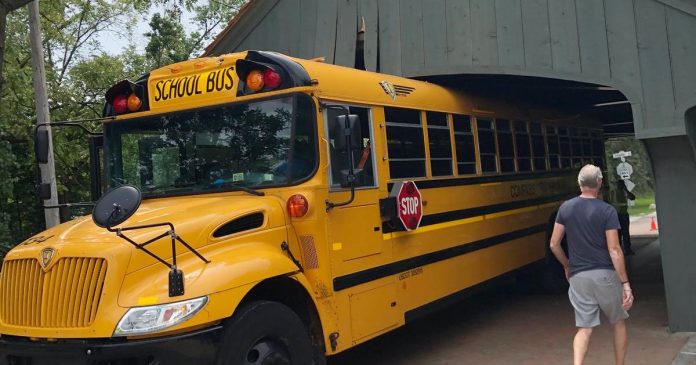 Less than 24 hours after its grand reopening, the Long Grove covered bridge has been damaged again.

A school bus traveling west to east across the bridge on Robert Parker Coffin Road left the bridge damaged at both ends.

It happened about 12:20 p.m. Saturday. The bridge, constructed in 1906, reopened with a ceremony at 1:30 p.m. Friday after 26 months of rebuilding. A box truck smashed into the bridge and caused major damage on June 27, 2018, soon after it was added to the National Register of Historic Places.

“The damage to the bridge is more cosmetic in nature,” Jacob said. “Obviously, it’s going to cost some money (to repair), but there was a steel structure that was put in there to protect it in case something like this would happen, and basically it protected the bridge.”

June Neumann, who owns Viking Treasures near the bridge, ran outside her store when she heard the crash.

“This afternoon I was at the shop and heard a noise I hadn’t heard for 26 months,” she said, “and said, ‘Oh, no, it couldn’t be.’ And I ran outside my door. Grabbed my phone and ran outside my door, and there was a yellow bus coming through the bridge.”

Neumann noted there are signs forbidding trucks and buses from using the bridge.

The bus became wedged in the bridge. Air had to be let out of the tires before a wrecking truck could pull the bus out, Neumann said.

“The (adult) golfers who were on the bus said that wooden pieces from the bridge were falling into the inside of the bus. There were two skylights on the bus, and both of those have been broken, and that’s probably where the debris came in.

It was too soon to estimate the cost of repairing the bridge again, Jacob said.

The village’s out-of-pocket cost to repair the bridge from the box truck incident was about $589,000. A $250,000 state grant, $195,000 from an insurance claim related to the crash and more than $53,000 from a historical society donation helped cover the cost of repairing the bridge.

“You can’t believe that somebody would do that, right?” Jacob said. “There’s noises. This is steel. The bus was being scraped and scratched. You would think that somebody would stop, get out and look but not to proceed all the way forward to the point where it got stuck. That’s the part that’s amazing to me.”

Hanover Area parents will have option of hybrid or cyber education...