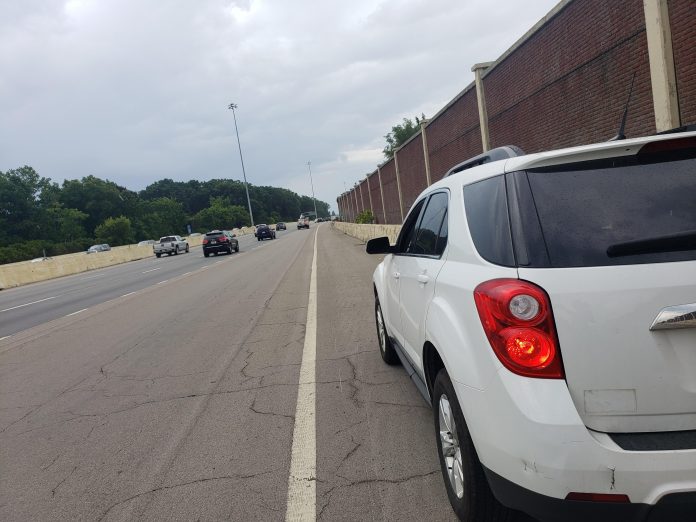 In addition to alcohol, speed and distracted driving, Ohio State Highway Patrol (OSP) troopers are now finding slow driving to be a safety hazard on the roadways.

According to Trooper Brian Neff, one of the things the patrol has seen a big spike in recently is motorists breaking down or having car troubles not getting off the interstate.

“We have had several instances of that lately,” Neff said. “We had one, turn very tragic, where a person was either driving very, very slow or stopped and another vehicle came upon them.”

Neff recounts another recent incident where he was dispatched to a pick-up truck driving on Interstate 77 near the Byesville exit with a flat tire. “I got the call that a vehicle was driving with a right front flat tire at a very slow speed with their four ways on,” Neff said. “This person pulled from the berm with a flat tire into the right lane. The only thing that kept them from being hit and possibly killed, if not injured severely, was the fact that there was a water bottle truck that was aware of what was going on ahead of him. He put his four ways on and spacing himself, stayed behind that truck making sure cars got around so he didn’t get hit.”

Neff noted that that call actually made him sick to his stomach as he envisioned all the bad things that could happen if somebody is driving a mile or two an hour down the interstate in 70 mph traffic.

“If somebody is driving with a flat tire and you are not going very fast and someone else is coming down the road, what happens if they look at their phone or what if they see the car but they just don’t comprehend that that car is only driving two miles an hour,” Neff said. “You coming up at 70 mph, your reaction is minimal.”

Neff noted that the driver of the pick-up truck had originally pulled over on the berm at one point and put his four ways on, and then thought maybe he could get to the next exit tor get the tire fixed. “Why the person didn’t feel safe to get on the berm or why they felt safe to get in the driving lane, I don’t understand that,” Neff said. “But a lot of times people think it’s OK to do things with their four ways on that aren’t safe. People think if they have their four ways on that everybody sees them and they are safe. But one of the things people don’t realize, is yes, people should see you when they come upon you, but if they don’t see you, it’s going to affect you and them considerably.”

Neff pointed out that there are two lanes for the interstate plus the berm essentially making three lanes. The berm is for when you are not able to travel with the speed limit flow of traffic and it’s there for drivers who need to pull over.

“if you cannot keep up with the legal speed of traffic, you need to pull over onto the berm, stop and call for help, or at least put your four ways on, use caution and be on the berm.”

Neff noted that the same issues are taking place on state routes and that if a driver on a state route is unable to maintain speed they should be putting their four ways on and pulling over on the side of the road, making sure they are off the road as far as possible

“Get in the grass to get off the road,” Neff said. “I had people tell me well they don’t want to get stuck. Broke down and sitting in the road is dangerous, broke down and stuck in the grass, we can fix that. A wrecker (tow truck) is going to come anyway so they can pull you out of the grass.”

According to Neff, most people don’t know just how fast a crash can happen and that everybody can see them with four ways one. Neff asked what about the one person that doesn’t see you.

Neff also noted that if a motorist breaks down near a guard rail, if possible, they should limp the vehicle along the berm past the guardrail, that way if an accident happens it’s the guard rail that gets hits and not the motorist.

If someone does break down on the interstate and it’s not a 911 situation, Neff suggests calling the patrol at #677 and that will help the people get to you. Call 911 if the vehicle can’t be moved out of the roadway because a vehicle in the road is a hazardous situation.

Distracted driving is still a major factor in accidents and Neff reminds drivers to pay attention to the road, stay alert, and know what is ahead of you at all times to avoid accidents.

Failure to yield when entering the interstate is another crash-causing issue.

“One of the things I see is when you are entering the interstate a lot of people believe the car in the right lane has to move over. That car does not have to move over. Yes, it would be courteous if they could, but the oncoming car has to yield,” Neff said. “We have a lot of crashes where the person getting on believes they have the right of way and they will keep going until they get hit and if they get hit sideways, they believe its the other car’s fault.”

Neff said that the yield sign is there to remind drivers it is their job to yield when they get on the interstate.

“You are changing lanes,” Neff said of drivers merging onto the interstate. “You are actually entering a different lane so therefore, you are the one who has to make sure you use caution.”

Another safety issue that is still a concern on the interstate is the failure to move over or slow down.

Drivers approaching law enforcement, ambulances, construction workers, wreckers, or a disabled vehicle with their lights or four ways on are required by law to move over, to slow down and proceed with caution.

“I have seen where there was a car coming up and there was not a car ahead of them or beside them or behind them and I’m on a traffic stop and waiting for them to get over and they just go right past me,” Neff said. “Too many people are so focused on getting where they are going they are not focused on what’s ahead of them.”

Speed has been an issue with the patrol writing numerous tickets for motorists who were driving 115-120 mph.

“I heard people say we’re not writing tickets. That’s not happening,” Neff said. “One of the things I noticed is with the restrictions on everybody: people are either doing the speed limit and following the law 100% or they are going so far the other direction, there’s no in-between. We have written numerous tickets for over 100 mph and it’s because they think there is nobody out there. There’s less traffic that can do more stuff and get away with stuff. There for a while, you weren’t seeing anybody break the law because nobody had the money to spend on a ticket. They didn’t have the funds to just drive around and do whatever they wanted.”

Neff said nobody intentionally causes a crash and typically it’s always something little that causes it, and that if they had to do it again they would not do the crash-causing action.

“There are more people driving and, with more people driving, the odds of a crash go up,” Neff said. “When everything was calm and nobody was out and about, nobody was working, everybody was at home and businesses were closed, we did have a huge decrease in the number of crashes but, you also had a huge increase in the number of people not driving. Now you have everybody starting to drive and you have people going to work and people going faster to where they need to go. Faster equals more crashes. Speed is a huge play in almost every crash we handle.”

The highway patrol is urging motors to slow down, pay attention to the road, use caution, pull to berm if needed, and be safe on the roadways.