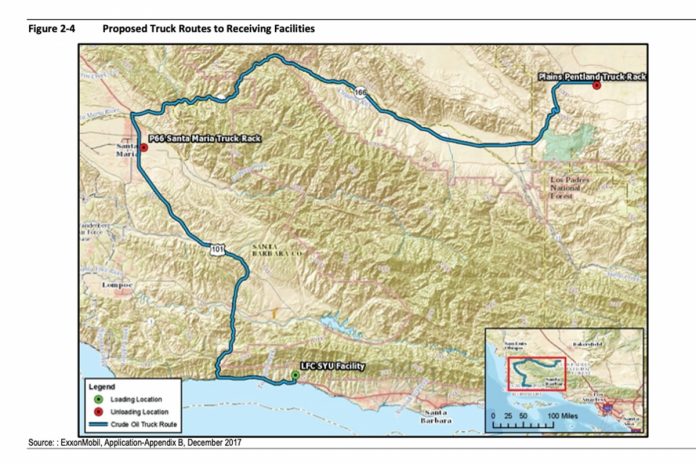 An environmental analysis has been released of a proposal to restart drilling at offshore platforms and truck the oil to Santa Maria and Kern County, setting the stage for hearings and a possible vote in September.

The Final Supplemental Environmental Impact Report released this week assesses the ExxonMobil application for 70 trucks to travel seven days per week, 24 hours per day from the Las Flores Canyon facility at Gaviota to sites in Santa Maria or Maricopa in Kern County.

Offshore oil platforms have been shuttered since a pipeline, owned by Plains All American Pipeline, ruptured and caused the Refugio oil spill on May 19, 2015.

Trucking would be a temporary transportation tool until approval and installation of a replacement pipeline to carry crude oil.

ExxonMobil has proposed a phased restart of its Santa Ynez Unit — Platforms Hondo, Harmony and Heritage offshore plus an onshore processing facility — using trucks for up to seven years or until a pipeline alternative is in place, whichever is shorter.

The environmental report looked at various alternatives, including taking oil to Santa Maria only, or doing fewer truck trips. Other options reviewed and rejected included sending trucks along HIghway 46 in northern San Luis Obispo County or on Highway 126 or 33 in Ventura County.

Under the proposal, trucks would travel north from Las Flores Canyon 12 miles west of Goleta along Highway 101 to reach the Santa Maria Pumping Station on East Battles Road or to take Highway 166 east to the Pentland Terminal in Maricopa.

While not trucking oil has been deemed the environmentally superior alternative, the analysis determined that the next preferred option involved not transporting oil by truck on rainy days.

This option also called for boosting the allowed number of daily truck trips to 78.

“The major environmental advantage to this alternative is that it would reduce the probability of an oil spill impacting sensitive resources (biological, cultural, water and marine), which is the only Class I impact identified for the proposed project,” the EIR stated. “This would apply for both the SMPS and the Pentland Terminal.”

The maximum spill from a truck would be about 160 barrels or 6,720 gallons, but the location and seasonal conditions could determine the extent of environmental damage, the report stated.

“Spills that occurred near drainages or waterways during rain events could be transported in to creaks and drainages more readily than during dry periods, likely increasing the extent and severity of the impacts to sensitive resources,” the report stated. “By not allowing trucking when rainfall of 1⁄2-inch or more in a 24-hour period is predicted, the potential for impacting sensitive resources from an oil spill would be reduced.”

The trucking proposal attracted strong support and opposition during meetings discussing the plan, with some favoring it for the return of high-paying jobs and others fearing assorted types of damage to the environment.

The application also has led to other divisions, with several chambers of commerce and the Santa Maria City Council backing the oil industry proposal while the Goleta City Council and multiple groups have united to oppose it.

— Noozhawk North County editor Janene Scully can be reached at .(JavaScript must be enabled to view this email address). Follow Noozhawk on Twitter: @noozhawk, @NoozhawkNews and @NoozhawkBiz. Connect with Noozhawk on Facebook.

Man armed with knife threatens patrons during an altercation at a...

Restaurants offering takeout and delivery during the coronavirus pandemic

BC native Ozment making a difference in trucking industry – Orange...

Protester speaks after being hit by truck during march – News...