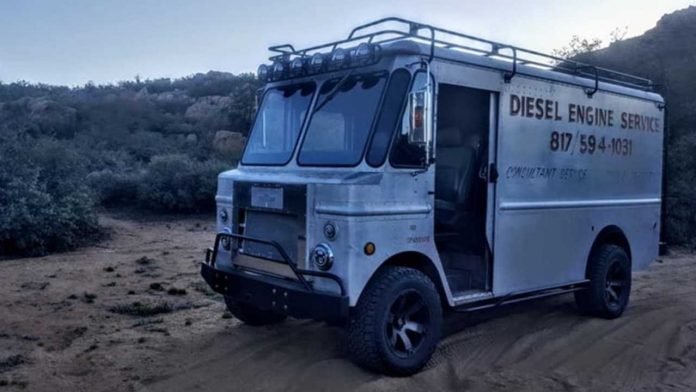 There’s are lots of weird vehicle builds, but we tip our hats to Likuid Creations for coming up with the wild idea of combining the chassis, drivetrain, and interior of a 2017 Ford F-150 with the body of a 1966 Grumman Olson van. The company’s client requested “a large overlanding rig that can handle plenty of gear, something that was drastically different than the average Sprinter and something that was one of a kind.” The result definitely checked all of those boxes.

Likuid Creations augments the van’s body with components like custom bumpers, including a bullbar at the front. There are sliders along the sides to protect the aluminum body. On the roof, there’s a storage rack with ladder access and a light bar. The company mounts a spare wheel carrier to the back that tilts down and becomes a ramp for easier access into the rear door.

Mechanically, the rig uses the F-150’s naturally aspirated V6 engine. This is because the owner intends to put over 30,000 miles a year on the vehicle, so both fuel economy and maintenance costs are a concern. Likuid Creations also installs a Mishimoto radiator and Superchips programmer. The van rides on a custom Fox 2.5 suspension.

The front portion of the cabin is exactly what you’d expect from a 2017 F-150. Although, there are tweaks like an alpine stereo with a back-up camera. Likuid Creations doesn’t provide any photos of the rear portion that would show off what it’s like to spend the night in this vehicle. Just judging by the size, there should be plenty of room in the back for at least two people to sleep, in addition to all of their gear.

Driver dies after pickup truck veers off Hwy. 101 north of...