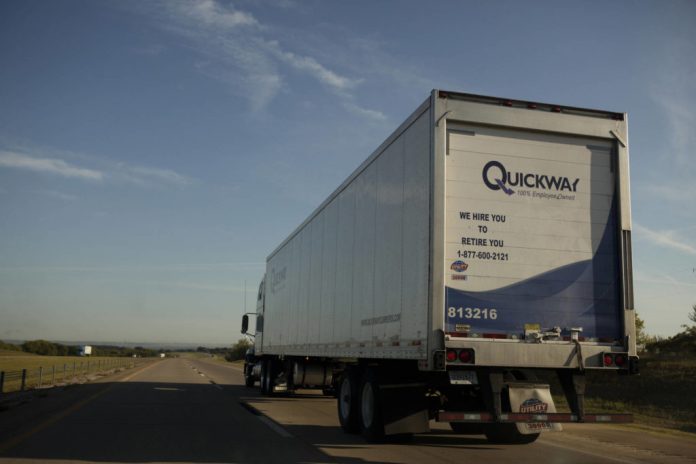 After spending 25 years as a long-haul trucker, Abbotsford’s Ricky St. Denis is used to adapting. As a professional driver, new cities, rules and technology are always around the corner – but no change has hit quite like the COVID-19 pandemic.

St. Denis said that truckers are used to being isolated on the road for long periods. But these lonely drives are punctuated by periods of socializing with other truckers or warehouse workers as they wait to unload – but not anymore.

“I like to talk, I’m a friendly guy. But the way this job is now, I mean, they’ve got a row of pallets in front of the counter and nobody wants to talk to you,” he said. “Normally, I would go in the back and stand by my trailer while they unload it and chat with a [worker] while he goes back and forth. And if I can, I lend a hand.

“Now they’re just saying, ‘Get out of here, drop your load and leave.’ ”

When these truckers arrive at their unload destination, whether that be a large warehouse or grocery store, there is typically a driver’s room where they can wait for their shipments to be moved off the truck. St. Denis said a washroom, sink, couch, table and TV are usually available for the drivers.

“Nobody’s letting us use their washrooms… They’ve closed all those off and put up a sign saying, ‘Sorry go use the Porta Potty,’ which doesn’t have a sink,” he said. “That tells me straight up the only reason they’re doing that is they don’t want to clean it.

“It kind of blows my mind. What does it cost to have someone go in there three or four times a day and just wipe things down, as opposed to renting a portable toilet?”

St. Denis said that many drivers are resorting to other options.

“You do what you gotta do, you know what I mean?” St. Denis said. “Before, you would plan that stuff out. Like if I have a 9 a.m. delivery, I know where I’m going to go.”

Transport Canada released a series of guidelines for the industry on April 1 to help curb the spread of COVID-19. Those recommendations include minimizing the number of vehicles that are shared between drivers, urging companies to equip drivers with all the necessary personal protective equipment, providing cleaning supplies to disinfect surfaces, and recommending drivers monitor their own health and hygiene.

St. Denis said his employer has been diligent and supplied all their drivers with nitrile gloves, paper towels, hand cleaners, hand sanitizer, Lysol wipes and even boxes of pens. But he says not all transport companies, or truckers for that matter, are responsible.

“At this point, it’s tough to even chat with [other truckers] because of the social-distancing thing,” he said. “I don’t know whether this guy that pulled in next to me has been washing his hands, or if he’s been taking care of stuff. I just don’t trust everyone.

“[Truckers] have been asking the companies [they unload shipments to] to supply them with hand sanitizer.”

Another challenge for drivers has been finding places to eat: truck-stop diners have shut down and the typical drive-thru doesn’t have the room to maneuver a massive truck.

While there are establishments that have made some exceptions for truckers, St. Denis said, such as an A&W in Kamloops, they are hard to find.

“Right off the bat, when everything else was closed, [A&W] was not letting us starve,” he said. “They put up signs saying ‘Truckers only.’ We can’t eat in the dining room, but at least we can come in and order.”

The B.C. Ministry of Transportation and Infrastructure has recognized the problems that truckers face. On April 28, they announced food trucks will be set up at a number of provincially owned locations in the coming weeks. The operators will be able to forgo the usual restrictions and fees. The province also said that some restaurants have re-opened for takeout along B.C. highways, and they have recently completed the installation of over 25 portable toilets at commercial pullouts and inspection stations.

“Commercial truck drivers play an important role in maintaining the supply chain by delivering essential goods during the COVID-19 pandemic,” says a provincial news release. “The drivers ensure people around the province continue to have access to the items they need, including food and medicine.”

But St. Denis said the added on-the-job isolation is the biggest change. He said, if he didn’t work for a company that treats the drivers right, that aspect would be much worse.

St. Denis said he fears the new isolation might become the norm.

“I think that’s the biggest thing. We no longer have contact with people… You feel like nobody’s really appreciating you… That’s something that may never go away now.”