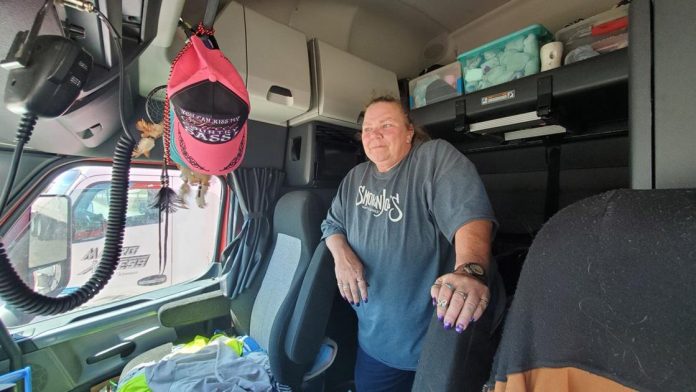 STILLWATER, Okla. — By the time Connie Reynolds pulled her 18-wheeler into Cowboy Travel Plaza, she’d made the long haul up Interstate 35 from the Texas border town of Laredo to central Oklahoma and was looking forward to kicking back at a table and sampling the rest stop’s Smokey Pokey barbecue before heading to Wichita, Kan.

But the Smokey Pokey was closed — except for takeout — because of the coronavirus. So was the rest stop’s bar, Western wear store and a special indoor attraction: a pirate ship. Reynolds had to eat her sausage in her truck.

“We would like to just go in and sit down and take a break, have a meal. For a lot of drivers, it’s a way to unwind,” Reynolds said as she sat in the truck’s cab recently, next to her new mask and hand sanitizer. “It’s got a lot of drivers wound up.”

About 70% of America’s freight travels by truck, and many of the country’s 3.5 million truck drivers are busier than ever during the COVID-19 pandemic, transformed into essential workers keeping shelves stocked with medical supplies and groceries.

“In the war against the virus, America’s truckers are really the foot soldiers that are carrying us to victory,” President Donald Trump said during an event honoring truckers on the White House lawn in April. “Truckers are playing a critical role in vanquishing the virus, and they will be just as important as we work to get our economic engine roaring.”

But just as the outbreak has helped some truckers prosper — like Reynolds — it also has left some truckers idle and brought new concerns about their health and security on the road.

Unlike the airlines, the trucking industry did not receive a federal stimulus bailout. While some trucking companies were eligible for small-business loans, many were not. Last year was tough in the competitive industry because of escalating insurance costs, tariffs on Chinese goods and a decline in shippers booking last-minute transport. Even large companies declared bankruptcy, leaving thousands of drivers jobless, some stranded on the road.

There have always been distinctions among truck drivers: Some are salaried, some own their trucks. Others work as independent contractors without health insurance and other benefits.

Seven in 10 truck drivers reported lower pay and more dangerous working conditions during the pandemic, according to a survey released in April by Change to Win, a coalition of national labor unions. Truck drivers at the ports of Los Angeles and Long Beach have demanded that the cities’ mayors ensure trucking companies comply with their orders to provide employees with face coverings, hand sanitizer and other protections.

“This global pandemic has exposed how major shippers and the port trucking industry have dismantled the social safety net for port drivers,” said Ron Herrera, director of the Teamsters Port Division.

Los Angeles-based driver Alex Mejia is an independent contractor like many at the ports, uninsured and worried about his health.

“People are getting sick, including me, and there’s not a medical plan for us,” Mejia, 43, said by phone from home. In March, the father of two paid more than $800 for a chest scan at an urgent care clinic, afraid he had coronavirus. It was the flu.

Mejia gets paid by the amount of freight he hauls. Since the outbreak, imports from China dropped, and his hauls have been cut in half. After 15 years in the business, Mejia had been earning $1,000 a week. Now, some weeks he makes $48.

Dzinh Lam, a driver for Garden Grove-based Boomerang Express, said dispatchers shifted him from the L.A. ports to the Midwest and the South because of the pandemic.

“Right now it’s not easy to make money,” Lam said from the cab of his Peterbilt 18-wheeler at a Love’s truck stop off I-35 in Oklahoma City.

Lam, 50, and his wife immigrated to the U.S. from Vietnam more than 20 years ago, and live with their 13-year-old son in Jacksonville, Fla. She works at a nail salon that has closed during the pandemic. Lam said he tries to stay on the road as much as possible.

So does Houston-based driver Andrew Williams. He said his boss got a federal small-business loan, but he wasn’t sure how long that would keep them afloat. In April, Williams, 57, was hauling concrete pipes down I-35 from Oklahoma City to Houston. Outside of essential goods, “it’s hard to find freight now,” he said. “The company’s struggling to keep me working.”

Williams said he had also been stigmatized for being a driver during the outbreak.

He sewed his own mask from a toboggan head cover and hair bands, stuffing cotton balls inside as a filter. Even so, when he rolled up to unload at an Oklahoma bucket company and stepped inside the building, workers shooed him out. “They look at you like they don’t want you inside,” he said.

At the same time, drivers hauling food and other essential goods are busier than ever, earning more and receiving accolades as frontline workers. Kim Kline, 57, was hauling flour in Oklahoma for Walmart, which he said “they can’t make fast enough” with more people cooking at home during the outbreak.

He noted that the outbreak led the federal government to lift restrictions on total hours some truckers spend on the road each day, the first time the rule has been suspended in 82 years. But that applies only to those hauling medical supplies, he said.

“That’s a farce. I was hoping they would do that for us too. We’re the pillar right now” of the economy, Kline said as he ventured inside Cowboy Travel Plaza for brisket.

Reynolds, 54, received a bonus in April from her employer, Crete, which has her driving from Chicago to Denver and points south, also making deliveries to Walmart and other home goods stores. She said Walmart employees have gone out of their way to thank her. “They were actually giving the drivers little goodie bags,” she said. A friend gave her a neoprene mask. A co-worker’s mother was sewing more.

After 37 years driving trucks, Reynolds is a heavyset smoker, which puts her at added risk of catching the novel coronavirus. When she arrives at stores, workers take her temperature and screen her for other symptoms of infection.

So far, she’s passed. She has health insurance, and if she gets sick, her company has promised her two weeks off with pay.

She has a 60-year-old fiance at home who’s retired and two adult daughters who worked at Waffle House and Freebirds World Burrito, both closed since the outbreak. Her daughters already received federal stimulus checks, but they’re still relying on her to pay the bills.

She does what she can to save money. “This lunch is a real special occasion. I do a lot of cooking in my truck,” she said, pointing to a hot plate and microwave above her mini-fridge.

Reynolds worries about security more than ever. The outbreak has turned her loads into targets for thieves. She read news reports about five Walmart trucks in Illinois robbed at a rest stop and worried she could be next, even though she’s hauling household goods.

Reynolds chooses rest stops carefully and tries to park in lighted areas overnight. She worries most when she’s making deliveries. These days, it seems people would do anything for toilet paper, and they ask truckers if that’s what they’re hauling.

“At some of these Walmarts, you don’t know what people are going to do,” Reynolds said. “It’s a lot like Black Friday.”

Parked next to her was a SpartanNash truck with pictures of vegetables on the side and a sign that said “Taking food places.” Driver Josh Rangel of San Antonio said that despite the sign, people still stop him when he’s making deliveries to Dollar General to ask whether he’s hauling toilet paper.

At the start of the outbreak, Rangel, 33, was so worried about his truck being robbed, he started carrying his concealed handgun. “This is like a Brink’s truck — I’ve got food,” he said.

His wife is a stay-at-home mom to their four children, and she wants him home more. He worries about bringing the virus back. As a baby, he had a liver transplant, which puts him more at risk.

But he stopped carrying the gun in recent days as he felt safer, more appreciated. And since the outbreak started he has received hazard pay, an extra $2 an hour. When he delivers, Dollar General clerks set aside Lysol, toilet paper and other coveted goods for him. On his way up I-35, he passed a lighted sign, “Thank you truckers, med staff.” Cowboy Travel Plaza offered a “free trucker special”: a barbecue sandwich and toilet paper with every 50-gallon fill-up.

“It’s sort of like being a service member now, because that’s how everyone gets their stuff,” he said.

“They’re not as ignorant about how, without them, stuff doesn’t get to their stores,” she said.

Cowboy Travel Plaza, like many truck stops, kept its laundry and showers open for drivers. But the dine-in restaurant remains closed, and she feels bad that she can’t sit down and chat while they eat their fried okra, pickles and salad sprinkled with barbecued pork.

“A lot of them have great personalities, and they just want someone to talk to,” she said.

By nightfall, a dozen trucks had parked at the travel plaza. Some already had their curtains drawn, a sign drivers had bedded down. But one tanker truck still had its lights on, including an illuminated cross on the front grille.

Driver Bobby Smithson is a nondenominational Christian minister (his citizens band handle is “The Preacher”). He’s based in Stillwater, but has been spending 20 hours a day on the road. Smithson had stopped to fuel up his propane truck after a run to Kansas, planned to grab a few winks and head out again in a few hours. “I don’t have time to go home,” he said.

Smithson, 56, has three adult children, two of whom have compromised immune systems, so he’s learned to be careful on the road, washing his hands often.

Hauling propane, he said, makes his truck basically “a big bomb.” Some rest stops won’t let him park, and many have closed because of the outbreak. Smithson said he’s more careful than ever about security, always parking under a light at night.

Smithson said he misses the restaurants and drivers’ rooms at his regular stops, where he could relax in easy chairs with fellow drivers. Now those rooms are closed, even though gas station convenience stores were still so busy with stir-crazy families out for snacks he had to wait half an hour to safely enter Love’s recently for a shower.

“People don’t realize that’s our home. We have to stop,” he said.

Like Reynolds, Smithson received a bonus for working during the pandemic. Despite the added risks and headaches, he had no intention of staying home.

“Everybody depends on us.”

VIDEO: Cattle spill out of semi-truck after it tips over, slides...