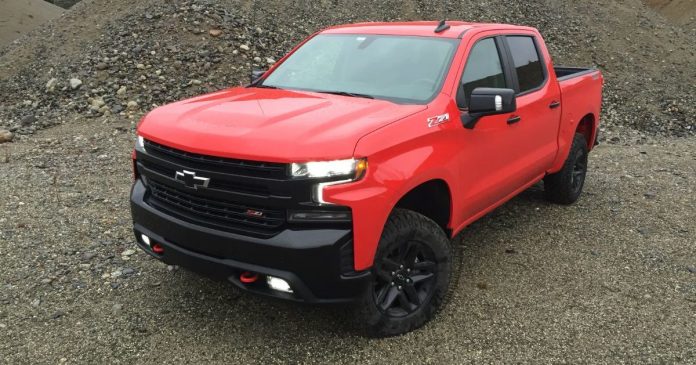 Last year, Chevrolet’s Silverado pickup series was displaced from its customary runner-up position on the sales charts by FCA’s Ram series — the first time this had ever happened. GMC Sierra pickup truck sales expanded, yet the redesigned Silverado took a step backward.

This event could not have played out well in the halls of GM’s headquarters in Detroit. After spending hundreds of millions of dollars to re-create the foundation and the styling of the brand’s signature full-size pickup trucks — plus the full-size SUVs that are now debuting as well — Chevrolet did not expect to sell fewer trucks.

Revamping the message and all ad campaigns, increasing production of the models that consumers really wanted, not the trucks that marketers thought would sell best, plus the inclusion of more innovation into lower-priced models instead of making these pieces optional, has helped the Silverado to jump-start sales in 2020 and retake its sales position ahead of the Ram series.

Our sample pickup, a radiant Trail Boss LT Crew Cab in Red Hot paint, is currently one of the most popular Silverados on sale. While Chevy still builds all three cab models, crew cab trucks now dominate sales — for all brands. The newest Silverado, upsized last year, offers the roomiest cabin, the largest pickup bed, plus revised powertrains that should cover any consumer’s operating needs.

Under the hood is a retuned 5.3-liter EcoTec V-8 making 355 hp. In many Silverado models, a six-speed automatic is still employed, while Trail Boss buyers can choose between eight-speed or 10-speed automatic transmissions.

Chevy offers six different powertrains in the Silverado. Base power now comes from a 310-hp, 2.7-liter turbo-four cylinder or the venerable 4.3-liter, 285-hp V-6. A 3.0-liter Duramax diesel is now available, with 277 hp and the highest EPA fuel economy ratings — 23/33 mpg — plus there are two versions of the 5.3 V-8. The top motor is the 6.2-liter V-8 from the Corvette/Camaro family, tuned to make an underrated 420 hp when teamed only with the 10-speed automatic. Properly equipped, this engine can deliver tow numbers up to 13,400 pounds.

As the lightest of the comparably equipped full-size trucks, the Trail Boss proved to be agile, and more fun to drive than some rivals. A tight low-speed turning radius — great off-road and at the mall — plus a generally more athletic feel in all driving maneuvers, a sense that it drives smaller than it actually is, left the impression that the Trail Boss might have a little bit of Camaro hidden deep inside. Pushing the EcoTec engine and the 10-speed automatic didn’t erase any of those impressions.

While the interior is well stocked with easy-to-use controls, sensible buttons and knobs, plus a versatile console that leaves the shifter on the column, where it belongs for practical sense, the Silverado’s cabin is comfortable, quiet and spacious. It is not, however, as well designed or attractive as its primary rivals, with an abundance of plasticky surfaces shading your impressions. The heated wheel and heated seats worked great, the visibility is good, but check the access before signing on the bottom line; without running boards, the Trail Boss’s added height requires a big first step.

With Silverado pricing starting at just over $28,000, the Trail Boss LT begins at $48,500. Sample truck shown stickered for $55,245 with several option packages.

Tim Plouff has been reviewing automobiles in the pages of The Ellsworth American weekly for nearly two decades.

Here’s every safe combination you need for ‘The Last of Us:...