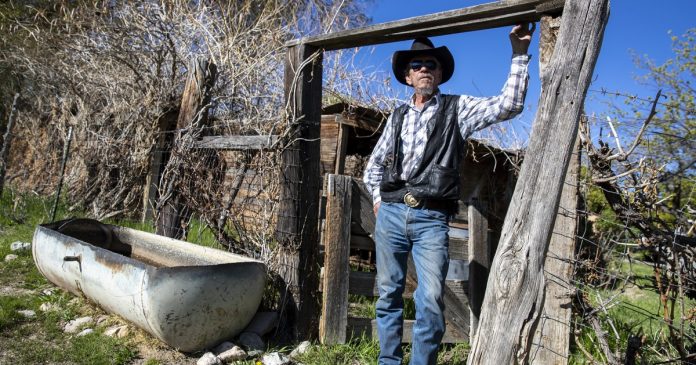 Glenndon Bundy adjusted his cowboy hat and leaned against a wooden post near the shoulder of Highway 93. A dry wind blew past; not much happening. A manager at the Sunset View Inn waved him over.

“People are overreacting to this damn coronavirus thing,” he told Bundy, taking a drag from his cigarette. “Every election year there’s a new disease! It’s being blown out of proportion.”

Bundy stood silent and listened. It’s best out here in Alamo, an hour and a half outside Las Vegas, to give a man space, let him unwind.

Running north through Las Vegas, out on the eastern end of Nevada’s open roads, is lonely Highway 93: a stretch where hundreds of miles of desolate terrain separate rural towns that resemble America’s rustic Wild West past. The desert sand stings the eyes with the slightest gust and hopes and dreams lift and die in the great expanse.

Since the arrival of the coronavirus pandemic, life along Route 93 has changed in ways big and small, good and bad. The rest of America plays like a strange, noisy radio beyond the hills and railroad tracks. The locals, as one might expect along a highway scattered with roadkill and hardened by the elements, are prone to suspicion, varying degrees of skepticism and occasional conspiracy theories.

About an hour’s drive from Bundy’s Alamo ranch is Caliente, a town of 1.9 square miles and home to 1,000 people that was first settled in the 1860s by two slaves who escaped Arkansas. In such a place, hours are made to ponder; a man can surmise many things before sunset. Longtime resident Rhett Butler — whose name conjures “Gone with the Wind” — is convinced sinister hands designed the outbreak to target America.

“Someone put the virus together,” he said as he stood behind the counter at Mountain Mercantile hardware and auto parts store. He didn’t mention who might be behind such a scheme, but past this highway, he suggested, were forces up to no good. But he added that while the virus is dangerous, it “isn’t necessarily as bad as it’s made out to be.”

Known among locals as “the widowmaker,” Route 93, often referred to as one of the most dangerous highways in the United States, is a north-south transportation artery that starts in Arizona and runs through Nevada for around 540 miles, connecting to Idaho and up to the Canadian border in Montana. One can find tranquility at several national parks and solitude off its countless feeder roads.

These days, with the deadly coronavirus on everyone’s minds, locals are finding it even more lonely. But they’re loving the silence that has fallen over rugged, untouched terrain and deep canyons off on the horizon.

Bundy, 68, likes the stillness in Alamo. A man of few words, he doesn’t care much for the company of others.

He doesn’t miss hearing children play outside at a school near his ranch. He’s glad tourists are scarcer too, even though they still straggle past on their way north to self-quarantines and social distancing. He’s noticed the line he stands in to buy whiskey is shorter. So that’s something.

“I get to be deep with myself,” Bundy said, his aviator glasses glinting in the sun.

Bundy said he’s a distant relative of Nevada rancher Cliven Bundy and his sons, who defied the federal government for years by refusing to pay proper fees for cattle grazing on federal land. In 2014, the dispute escalated into an armed standoff when hundreds of protesters rallied around Bundy after the government sent agents to his ranch to confiscate the cattle. The ordeal ended in 2018 when a federal judge dismissed the indictment.

Alamo lies in the Pahranagat Valley. During the 1860s, the area was used as a rest stop by horse thieves who were making the long trek across the desert to California. Mormons later farmed and ranched on the lush landscape. Not much has changed since. The post office from 1905 is still open.

“I have a few people who’ve been living here for a few weeks because they felt it was safer than being at home.”

Bundy was surprised life could get even less busy in this town of a little over 1,000 people. His house, tucked behind long, winding roads and hidden by tall trees, is difficult for locals to find. Whenever he practices shooting his gun out on his ranch, police leave him alone.

He wants to keep it that way.

But farther down the road, Vicky Ramming and her husband, Dan, were having trouble. Their RV broke down outside the town of Coyote Springs, about 60 miles north of Las Vegas. Coyote Springs was supposed to be a sprawling town with schools, houses and resorts. That dream stalled during the Great Recession. Now there’s only a golf course.

Still, the couple were in no rush to head home to central Oregon.

“We were told it’d take about 30 minutes for someone to come out here to help us, but we know it’ll be much longer,” Vicky Ramming said, laughing.

Others who were traveling through on Route 93 decided to stay and ride out the pandemic in motels along the highway.

“I have a few people who’ve been living here for a few weeks because they felt it was safer than being at home,” said Vern Holoday, owner of Alamo Inn, a small, white motel that sits about 96 miles out of Las Vegas.

For truck drivers such as Alejandro Marin, driving the two-lane highway during a pandemic presents a medley of problems. Before the arrival of the virus, Marin, who has been hauling goods from the southern border to Canada for several years, had found Route 93 peaceful.

But these days, he said, the virus has complicated his 3,500-mile journey. With fewer truck drivers to deliver goods, Marin is under a tight schedule. Time is of the essence. But with rest stops along Route 93 closed, he’s struggled to find restrooms and places where he can pull over and sleep.

“I’ve ended up just pulling over on the shoulder of the highway,” Marin said.

“People are glad we’re open. And now we are getting to know more locals.”

A short drive from Alamo, at the intersection of U.S. 93 and Nevada State Route 318, is the ET Fresh Jerky rest stop, where travelers can grab snacks and use the restroom. The place got its name for its proximity to the secretive road that leads to Area 51: a top-secret military base that’s been the center of UFO conspiracy theories for decades.

“There’s only been a couple slow days,” store clerk Jennifer Aiello said on a recent afternoon. “People are glad we’re open. And now we are getting to know more locals.”

Since mid-March, when the virus started spreading rapidly in the U.S., gas stations, grocery stores and small shops along Highway 93 have been running low on toilet paper, fresh produce and disinfectant wipes. Everyone knows why: Las Vegas residents rushed over in the early days of the outbreak and bought up all the supplies.

Butler has been keeping tabs on how the pandemic has altered life in America: “Before I answer your questions, let me first ask you what your thoughts are on the coronavirus,” he asks a reporter. He listens but is not satisfied with what he hears. He decides to talk anyway.

A showcase for compelling storytelling from the Los Angeles Times.

Butler is a country man. His upper body is hefty, his hands coarse from years of carpentering. His mustache rises and falls like a small, white wave when he talks.

He has spent 32 years in Caliente. He embraces his 2nd Amendment right to bear arms and wants others to do the same. A few years ago, when an older lady came to the store wanting to buy bullets but learned they were sold out, Butler gave her his own pack of bullets and later spent an afternoon showing her how to shoot.

He fears the coronavirus is letting the government take away a man’s rights. He points to the recent restrictions imposed on daily life — such as social distancing, self-quarantining and businesses closing. And how Los Angeles County Sheriff Alex Villanueva tried to close gun shops after he said they are not essential businesses.

To Butler, those are examples of the U.S. government stripping away people’s rights. The sheriff backed down after the Department of Homeland Security issued new guidelines on essential workers.

“Where is the governor getting his authority to impose a shutdown like this?,” he asked, referring to Nevada Gov. Steve Sisolak’s order for all nonessential businesses to close.

“This is going to destroy us,” the 62-year-old said as he tended to a few customers at the Mountain Mercantile.

He also blames news organizations for stories that he says have been “hyped up.”

“A lot of people are scared because of the media,” he said. “They’ll have people start believing that 1+1 = purple skies.”

Butler has five children and a good relationship with his ex-wife. He enjoys spoiling his dog, Bo, with pats and treats. When stores in Caliente sold out of toilet paper and hand sanitizer, Butler drove down to Las Vegas, whose stores had been restocked, with his son, Jack, and loaded up on supplies for his neighbors.

“Locals in Caliente watch out for one another,” Butler said.

It was nearing 6 p.m., the sun was setting and Butler was ready to head home. He closed out the register and walked toward the door when store owner and former mayor of Caliente, Kevin Phillips, stopped him.

“We help each other in this town, don’t we Kevin?,” Butler asked him.

Phillips, 69, stopped and looked down. He was at a loss for words. He needed time to think. An active member of the Mormon church in Caliente, Phillips fought his fair share of political battles during his 16-year tenure as mayor, which paid $197 per month.

In 2010, when the railroad company decided to pass through Caliente without stopping, his plan to offer Caliente as a transfer station for America’s nuclear waste drew ire from some in town. He maintains his intention was to preserve the town’s future and create jobs.

Tears fell down his face as he walked toward the front of the store with Butler.

“Yes, we do help each other,” Phillips told Butler. He apologized for choking up. Days earlier his wife asked him how many months he reckoned they could go without having to go grocery shopping. He figured around three to four months.

“We know how to be self-sufficient,” he said. “This town always toughs it out”

FCA seeks trademark for ‘Dakota,’ but not for a midsize Ram...