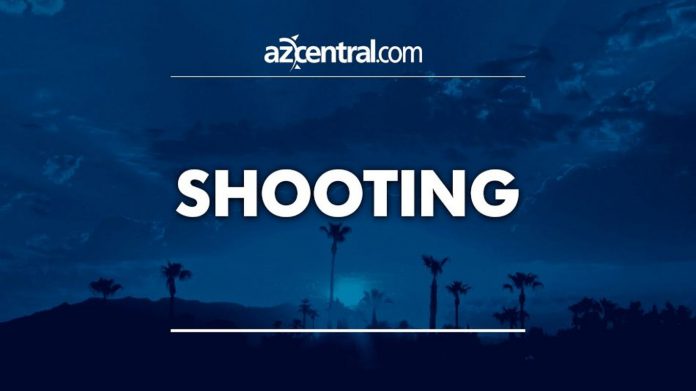 Police say one person was killed and two others wounded in a possibly gang-related shooting at a convenience store in Tucson on Saturday. (Photo: The Republic)

Police say one person was killed and two others wounded in a possibly gang-related shooting in Tucson on Saturday.

According to Tucson police officials, officers were dispatched to a shooting at a convenience store near 29th Street and Columbus Boulevard around 3:45 p.m. on Saturday.

Investigators learned the driver and passenger of a Dodge Ram truck were standing outside the truck at the convenience store when they began to argue with the driver of another car, identified as 29-year-old Omar Rascon.

Witnesses told police the drivers of the two cars shot at each other before fleeing the scene. Rascon and a woman arrived at the Banner University Medical Center with gunshot wounds shortly after, according to a statement from the department. Rascon died shortly after and the woman sustained non-life threatening injuries, the news release stated.

Soon after, a third-person arrived at the hospital with another gunshot wound, who was identified as the driver of the Dodge Ram. The driver was receiving treatment for his injuries on Sunday, and officials said charges were pending.

Police said at least one person involved in the shooting had known gang affiliation.

The shooting is still under investigation and anyone with any information should call 88-CRIME anonymously.

UConn student who ‘killed two men and kidnapped a woman’ is...