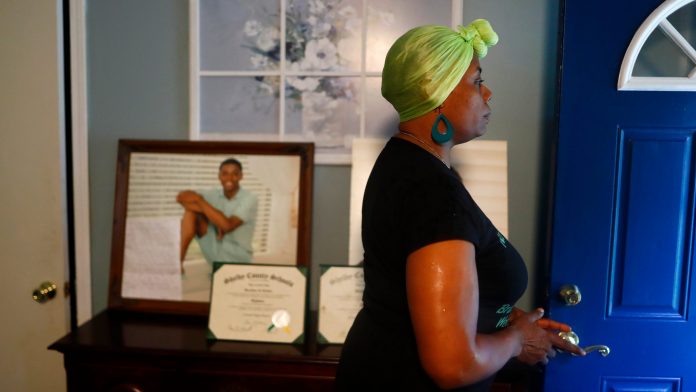 The first time Jaleta Clark saw Brandon Webber’s body after he was shot by members of the United States Marshals Service, her 20-year-old son had already been dead four days, she said.

The bullets shattered his skull, neck and hip bones. They nearly detached his thumb on one hand, ripped one of his legs from his body and damaged all of his internal organs, she said.

“There were holes everywhere except the bottom of his feet,” Clark said in her first detailed account of what happened since her son’s death one year ago. “Every part of his body was shot up… I identified pieces of my baby.”

Webber was killed in the front yard of his his mother’s Frayser home on June 12, 2019. The Marshals Service was there to serve an arrest warrant on charges of armed robbery, aggravated assault and conspiracy to commit armed robbery.

Webber was accused of shooting a man five times and stealing his car in Hernando about a week prior, DeSoto County District Attorney John Champion said at the time.

Marshals said they shot him because he rammed their cars.

Since then, almost no new information has been released either about the Tennessee Bureau of Investigation’s probe into his confrontation with law enforcement in Frayser or about the incident in Mississippi that led to it.

‘He didn’t grow up this way’

Jaleta Clark mother of Brandon Webber, who was shot and killed by U.S. Marshals in June of 2019, stands in her home surrounded by photos of her son on Monday, June 8, 2020.  (Photo: Joe Rondone/The Commercial Appeal)

The person Clark would hear prosecutors and law enforcement officers describe in the days that followed her son’s death didn’t fit with who she knew Webber to be during his short life.

The son she knew had excelled in school since he was in the Head Start program. He finished sixth grade second in his class. He graduated from Central High School with honors. He went on to University of Memphis where he planned to study psychology and criminal justice.

When his younger brother struggled in school, he tutored him. He liked to draw and he taught himself to play the piano and later the guitar. He was also trying to get a rap career off the ground.

When his high school girlfriend got pregnant and gave birth to his son Brandon Webber Jr. several weeks premature, he took a break from his freshman year of college to help care for the baby — born 1 pound, 14 ounces — and ensure that she, too, would be able to get an education.

Still, Clark didn’t hold her son on a pedestal.

She recognized both his strengths and his flaws. For example, she knew he sold marijuana and that he often did so on live videos broadcast from his Facebook page.

Clark and Webber’s stepfather, Uzico Parker, had told him to stop but Webber never felt like he was doing anything wrong. After all, Webber would say, the drug was already legal in several other states. He figured it was only a matter of time before it would be legal in Tennessee too, Parker said.

But to shoot a stranger, steal his car and then drive around in the stolen car for days? She doesn’t believe her son was capable of that kind of violence.

In fact, days earlier he had stopped by the house so Parker could help him change the oil and transmission fluid on the car. After letting other cars fall into disrepair in the past, he was determined to take care of this one.

“I don’t see how or why my son’s mind would flip to where he would think ‘I’m going to take somebody’s car,'” Clark said. “He didn’t grow up robbing, stealing, killing. He didn’t grow up this way. That’s not what or who I know.”

Clark said she would accept it and apologize to the victim’s family if it really happened the way the Hernando Police Department said it did. But she won’t accept that until she has seen the evidence that proves it.

“He was a perfect son for me,” Clark said. “Now they are making me, from beyond the grave, making me question his character.”

Jaleta Clark mother of Brandon Webber, who was shot and killed by U.S. Marshals in June of 2019, cries as she recounts what she remembers from that fatal afternoon outside of their family home, nearly one year later on Monday, June 8, 2020.  (Photo: Joe Rondone/The Commercial Appeal)

For Clark, the day Webber was killed felt strange from the moment she woke up early for work and looked out her front window.

The sun was rising and her block was still quiet. An AT&T work truck parked near the end of her driveway caught her eye and she didn’t see anyone working near it.

Immediately, she she had “a bad feeling” in her gut and started to question if it might be undercover officers watching her home, there to arrest Webber, the oldest of her three sons, for selling marijuana.

She called Webber several times that day to check on him and left work early to make sure nothing was amiss at home. When she arrived, she was relieved to see Webber parked in her driveway. The AT&T truck was still there.

After about 90 minutes passed uneventfully, Clark decided to make the quick drive to the convenience store at the end of her street for two cans of Coca-Cola about 6:30 p.m.

As she drove with her radio on, she didn’t hear anything out of the ordinary. But as she was standing in line to check out, another customer came inside and asked if anyone else had heard the gunfire.

A barrage of bullets had just been fired at the house on the corner.

Jaleta Clark is held by her son Blake Webber as she joins community members gathered outside the Frayser family home in a vigil for her son Brandon Webber on Friday, June 14, 2019. While attempting to serve a warrant, the U.S. Marshals Service task force shot and killed Webber on Wednesday, June 12, 2019. (Photo: Joe Rondone/The Commercial Appeal)

Clark was back home in seconds.

She saw a wall of unmarked SUVs  and pickup trucks blocking her view of the car Webber was sitting in when she left just minutes earlier.

Her middle son was lying handcuffed in the street, his bare chest against the hot asphalt amid the summer sun. She yelled to him to make sure he wasn’t hurt.

Then she yelled “Brandon” only twice. She was met first with silence then with the voice of her middle son who, even handcuffed in the street, wanted to keep his mother from seeing what happened to his brother.

“He wasn’t crying,” Clark said. “He just had a real sorrowful look. He was like ‘mama leave, mama go.'”

When Clark identified herself, a Memphis police officer at the scene quickly whisked her away. Clark said she was made to sit in a police cruiser that was parked several houses down and behind a wooden fence cutting off her view of the scene.

She said she looked at the clock as the officer walked away. It was 6:45 p.m. Though she was not under arrest, she was not released — not even to use the restroom — until 4:30 a.m. the next day. Her middle son was not arrested either, though he too was detained until the early hours of the next morning.

Even before anyone confirmed that Webber had died, Clark said she knew. She could feel it.

‘A slap in the face’

Sonny Webber, father of Brandon Webber who was shot and killed by U.S. Marshals in June of 2019, recounts what he remembers from that fatal afternoon outside of their family home, nearly one year later on Monday, June 8, 2020.  (Photo: Joe Rondone/The Commercial Appeal)

Webber’s father, Sonny Webber, was the only one in the family to see his son’s body the day he was killed. Clark had called him and Parker from inside the police car.

While the law enforcement vehicles blocked most of the view from the street. Sonny Webber could see through the hedges separating Clark’s yard from the neighbor.

“I walked in the yard and straight to the fence and I seen my baby laying there,” Sonny Webber said. “I seen my son laying there with his head open… I just lost everything. I couldn’t stand. They had to tote me out of that yard.”

That night, unrest broke out on the street. People threw rocks and bricks at police and marshals and journalists. Several Memphis Police Department officers were injured, though none seriously.

MPD used tear gas to break up the crowd.

“For me, it’s like a slap in the face every time I have to go to court because I’m the only one that’s been charged with inciting a riot on that day,” Sonny Webber said, emphasizing that no marshals were charged in the death of his son. “The same feelings that’s going on around the world that’s happening right now with brother George Floyd, that’s the same feelings everybody had when Brandon got killed.

“For me to be charged with that is a slap in the face… I still have to face this fact a year later after my son is gone and I still have no answers. No nothing.”

It’s unlikely that Brandon Webber’s family will ever see any of the evidence against him related to the shooting he is accused of committing in Hernando.

If he had lived, prosecutors would have had to prove publicly that he had committed the crime but with his death, the court case ended.

“The only thing that’s public is what goes through the court system and because he is deceased there is no court case,” DeSoto County District Attorney John Champion said. “My records are not public.”

The Tennessee Bureau of Investigation said the probe into the actions of the marshals is complete but the agency said documents could not be released while the Shelby County District Attorney’s review of the case was ongoing. The shooting victim in Mississippi could not be reached for comment.

Webber’s family is no closer to understanding why he was killed now than they were in the weeks after his death.

Desiree Stennett is a reporter at The Commercial Appeal. She can be reached at desiree.stennett@commercialappeal.com, 901-529-2738 or on Twitter: @desi_stennett.