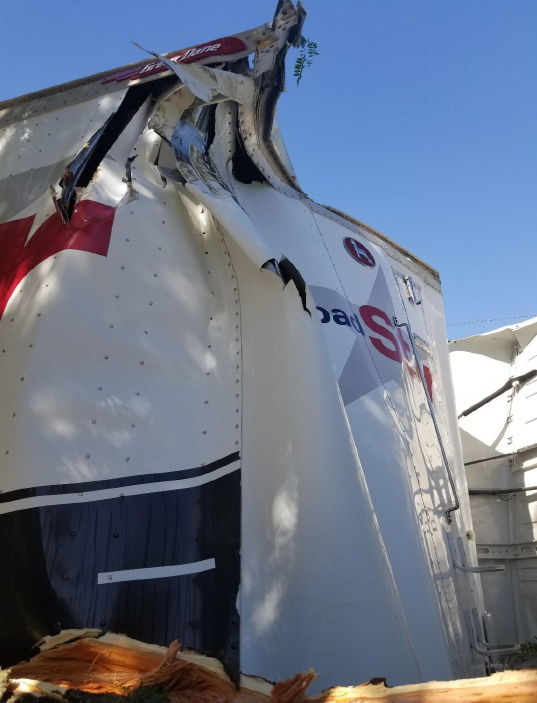 CHICAGO, Ill. – An Ontario fleet says its tractor-trailer is being held hostage in Chicago, as part of an apparent scheme that would make Al Capone proud. And the company has been hit by it twice.

RoadStar Trucking is attempting to recover a tractor and trailer that a Chicago-area towing company impounded Aug. 12. The company, VIP Towing and Roadside Assistance, wants US$18,958 to release the equipment, which it says it towed and stored under authorization from the driver following a minor damage incident.

The RoadStar driver struck some tree debris following a major storm, in an industrial area near his delivery location. Police arriving on scene allowed the driver to proceed to the receiver – just 500 yards up the road – and unload. RoadStar told its driver to wait there for further instructions, and a local Volvo dealer was called to meet him at at the receiver and help guide him to the dealership for repairs.

In the meantime, four men from VIP Towing showed up and told the driver they had secured permission from RoadStar general manager Joe Smelko to have the truck towed, Smelko told Today’s Trucking in an interview. The driver signed a “pre-tow disclosure,” granting permission for them to tow the equipment. The driver was then dropped off at a hotel.

Smelko, however, insists he never granted permission for them to tow the truck and doesn’t even have authorization to do so. In fact, witnesses have told him VIP arrived with a light-duty tow truck and actually drove the damaged unit from the receiver to its own yard. It has since been moved to a second location, according to GPS records.

Despite the alleged misrepresentation, Smelko contacted the towing company to see what it would cost to recover his equipment. Smelko said he nearly hit the floor when he was told the bill was nearly $20,000.

This is the second time this has happened to RoadStar in Chicago. The first time, the lightly damaged truck and trailer were under load and the company begrudgingly paid to get the equipment and freight back. That time it was a different tow company altogether, Citywide Recovery.

“This can’t be a RoadStar problem,” Smelko said, wondering if a widespread extortion ring could be at play.

This time, the company decided to fight back. Police were not overly helpful, passing RoadStar back and forth between four different detachments. Eventually, police visited the driver at his hotel and took a statement. RoadStar filed a statement of claim with the Circuit Court of Cook County, Illinois, and is demanding the return of its equipment and $50,000 in damages.

VIP Towing, for its part, has not yet responded to the statement of claim. But a local CBS news affiliate investigating unscrupulous practices in the local towing industry visited VIP, and asked a representative about the RoadStar invoice.

“Towing is expensive. It’s not cheap,” the unidentified employee said on camera. “Why do people think that towing is cheap? It’s not. Not when you do professional towing. Why shouldn’t it be $18,000? Can you tell me why it shouldn’t be $18,000?”

Smelko is interested in knowing how many other carriers have been victimized.

“Think of all the carriers in this area that go to that location every day,” he said.