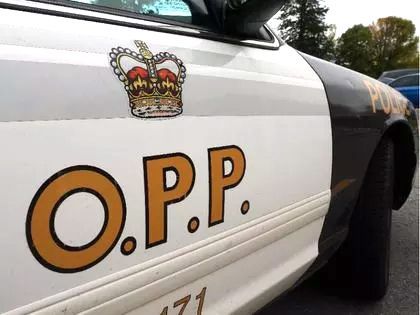 Police are searching for a pickup truck stolen from a Zorra property on Monday.

OPP report that the theft occurred around 3:15 a.m. when unknown suspects attended a property on Road 84 in Zorra and stolen a white and grey, 2003 Dodge 4×4 pickup truck. The truck also had a red 100 gallon fuel tank on the back.

Two men were arrested Tuesday after a break and enter at a Zorra business.

Oxford County OPP report responding to an alarm at the business on Road 64 in Zorra around 2:40 a.m. When police arrived, they arrested two men on the property.

Both will appear in Woodstock court at a later date.

A 35-year-old person is facing stunt driving charges after allegedly driving more than 50km/h over the speed limit on Highway 401 in Blandford-Blenheim Township Wednesday morning.

Police said an officer was doing speed enforcement when the vehicle was seen “travelling at a high rate of speed.”

The vehicle was pulled over and the driver was charged.

The Oxford OPP are reminding all drivers the minimum fine if convicted is $2,000 and an automatics driver’s license suspension for seven days and a seven day vehicle impoundment.

The Paris person is scheduled to appear at the Ontario Court of Justice in Woodstock at a later date.

No trespassing on CP property near Tillsonburg

The Oxford OPP are reminding people the Canadian Pacific railway tracks near Tillsonburg are private property after they responded to several complaints.

Police said the property owner has cleared debris, including garbage and belongings left behind by people who use the area to camp and walk their pets.

No trespassing signs have also been posted at multiple access points.

Police are reminding people there are two nearby trails available for the public’s use.

How thinking like a boat racer led to the creation of...

People Believe These Myths About Pickup Trucks… And It’s Ridiculous

Commercial Vehicle Rental and Leasing Market 2019 to 2025 Report with...

Man charged with murder, accused of running over his ex-wife with...