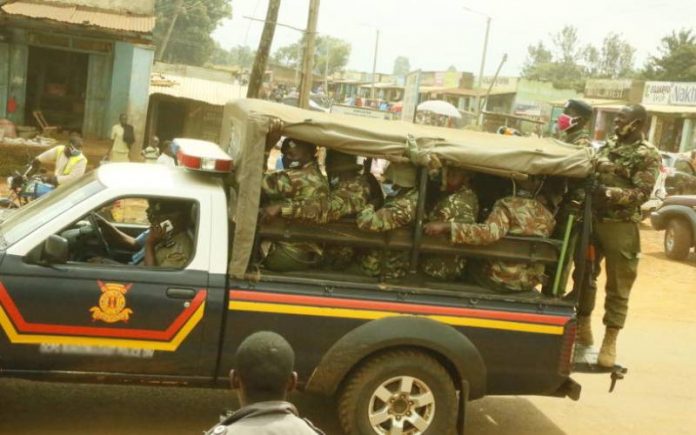 Three police officers based at Nairobi’s Kamukunji Police Station have been quarantined after testing positive of Covid-19.
Their families and almost 30 other officers have also gone into isolation for contacting the officers.
The officers are waiting for results of the tests they conducted on Friday night to know the way forward.

There are more than 100 officers based at the station.
They have, however, gone to isolation as they wait for the results. Their houses and police premises were fumigated on Friday as part of efforts to stop further spread.
One of the officers and his family is quarantined in his house while the other two are at Kenyatta University Hospital Quarantine Centre and Mbagathi Hospital respectively.
The officers’ whose samples tested positive say they cannot tell where they contracted the disease.
This comes amid concerns that police and prisons warders remain the most vulnerable to exposure to the disease because of the nature of their work.

On Wednesday, the government said it was ‘handling well’ Covid-19 cases among disciplined forces, even as officials declined to issue the exact number of infected officers.
After truck drivers and health workers, police and prison warders are the other vulnerable group due to the nature of their work.
Already there have been several scares of the disease among this group with cases being reported among prisoners.
Measures put in place
Even though police and prison authorities do not have the exact number of their personnel who have contracted the disease and are either recovering or have healed, insiders said dozens are affected.

“Some of these figures are restricted, but we can confirm Covid-19 has not spared the disciplined forces,” said Director of Public Health Francis Kuria.
Kuria said stringent measures were in place in case any officer was exposed to the virus.
“We have identified isolation centres and have an elaborate contact tracing mechanism, and this is ongoing well,” said Kuria.
Some officers are however said to be throwing caution to the wind, though for some it is due to challenges in getting protective gear.
“The officers are supposed to handle people, who are the main source of the disease. They are exposed by the nature of their work but we are working hard to ensure they are safe,” said a senior officer aware of the developments.

The affected personnel are recovering at various places in the country. They were sent to isolation centres after being traced from earlier confirmed cases.
For instance, a number of prison warders in Manyani and Shimo La Tewa prisons were isolated after inmates tested positive of the virus last week. Dozens of warders were on May 28 also sent to isolation after 31 remandees at the Industrial Area in Nairobi tested positive for the disease.
Release of petty offenders
Commissioner General of Prisons Wycliffe Ogalo said they had taken appropriate preventive measures to stop the spread of the virus within the 129 correctional facilities countrywide.
He said in concurrence with the National Council on the Administration of Justice (NCAJ), they recently released 11,000 petty offenders and convicts who had already served almost the entirety of their respective jail terms.

“The suspension of all visits to our prison stations, Borstal institutions and youth corrective training centres have also proved effective in mitigating the spread of the virus to the prison population,” he said.
Ogallo said in consultation with development partners and key stakeholders, they were progressively reviewing their precautionary measures based on the current outbreak dynamics of the pandemic in the country.
“If need be, we will adopt and deploy more radical approaches to prevent the spread of the virus within our correctional facilities,” he said.
However, for National Police Service (NPS), the US Ambassador to Kenya Kyle McCarter has been donating protective gear for their use.
Each of the locally produced USA Marafiki faces masks comes in packaging printed with public health information to help educate Kenyans about how to protect themselves from Covid-19.
Two weeks ago there was panic at the Kilimani police cells after a suspect, detained for murder, tested positive.
It forced 10 officers who had handled him to be quarantined.