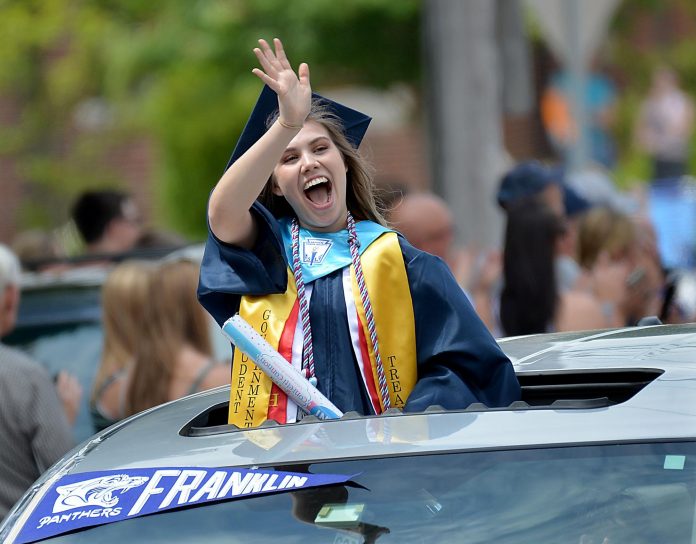 Over 400 cars, trucks and SUVS packed with seniors graduating from Franklin High School traveled through the town on Friday afternoon to celebrate their graduation in the form of a car parade. The student procession was aired later that day at 6 p.m. on both the town’s access and educational channels, along with the high school Class of 2020’s graduation page on YouTube.

FRANKLIN — Waving from a truck through town wasn’t how Chorrkin Chin envisioned celebrating his high school graduation, but it was also one car ride he’ll ever forget.

“It was crazy – I don’t even know where to start,” said Chin, vice president of the Franklin High School Class of 2020 after the high school’s first-ever car parade graduation on Friday afternoon. Wearing his blue gown with a gold graduation stole and honor cords, the 18-year-old graduate decked out his ride with silver streamers and banners for the ceremony. He saw many teachers along the 3-4 mile route, which included circling the Town Common then ending up at the high school where graduates received their diplomas from Principal Paul Peri and roaring cheers from teachers and the administration.

He even saw his kindergarten teacher.

“There was so much support for us in this community – it’s unbelievable,” he said. “Definitely one of the best times (of my life that) I’ve ever had.”

Chin was one of 432 seniors to graduate from Franklin High School that afternoon in the form of a town-wide car parade. Students started at the middle schools they attended in town – either the Horace Mann School, Remington Middle School or Anne Sullivan Middle School – with the top 10% of the class and class officers starting at the high school.

Over 400 cars, trucks and SUVS passed through the town’s major roads in their decorated cars, honking and waving at hundreds of cheering friends, family, strangers and dozens of teachers throughout the community.

“There was a lot of positivity, a lot fun and a lot of thank-yous from both students and parents, and also educators,” said Peri about the parade coordinated with the police and fire departments. “One of the most special parts was that educators from across the community came out to say congratulations – that was really wonderful. From early childhood to the charter school, and K-12.

“We saw a lot of happy tears out there,” he said.

The student procession was aired later that day at 6 p.m. on both the town’s access and educational channels, along with the high school Class of 2020’s graduation page on YouTube.

Students stopped by the high school earlier that month to record their parts for that procession, which included walking across the stage to receive their diplomas and posing for a photo. The national anthem, military recognition and speeches were also prerecorded, including Chin’s speech.

“Today is the day we officially celebrate graduating high school, and even though it looks different, I encourage you to not let anything change. Mark this moment,” he said in his speech. “If there’s one thing you should pull from me today, it’s to please be aware of when you’re happy – and mark it.”

Like most other high schools in Massachusetts, the administration at Franklin High School opted for a car parade graduation in place of its standard graduation due to the current coronavirus pandemic. Several other area schools have held or will hold similar ceremonies, including Bellingham, Hopkinton, Milford, Millis, Natick and Weston High Schools.

PHOTOS: Hopkinton High Class of 2020 honored with celebratory car parade
Bellingham plans car parade to honor Class of 2020 and hopes for in-person graduation in the summer

Now that Chin has driven away with his high school diploma, he plans to study marketing this fall at Elon University in North Carolina. Mirroring the whirlwind of events his senior class has endured over the last few months and participating in the district’s first-ever car graduation parade, he said he doesn’t have a particular career path in mind yet, but knows everything wherever he ends up, it’ll work out.

Lauren Young writes about politics, social issues and covers the town of Franklin. Reach her at 774-804-1499 or lyoung@wickedlocal.com. Follow her on Twitter @laurenatmilford.