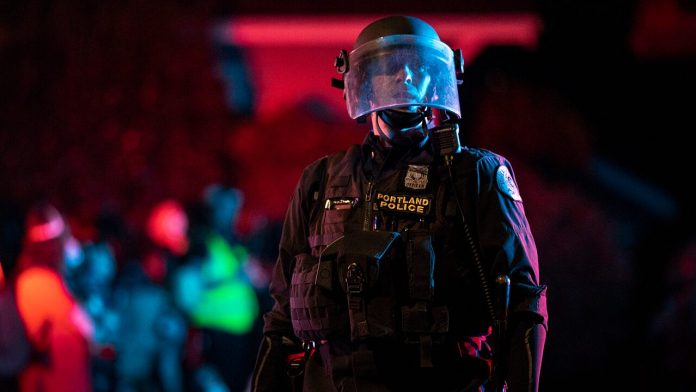 More than 60 emergency calls to police went unheeded overnight in Portland as officers were preoccupied with hundreds of demonstrators downtown and were pelted by rocks.

On the 80th consecutive night of protests, the Portland Police Bureau declared a riot around midnight Sunday after a crowd of hundreds had blocked traffic for three hours by the Penumbra Kelly Building in the 4700 block of East Burnside Street, trespassed on the closed property and engaged in “violent, tumultuous conduct.”

The targeted building is owned by the city and is used by city and county employees, including the Police Bureau.

From midnight to about 2:45 a.m., protesters ignored warnings from police to disperse and began arguing amongst themselves.

Some threw objects at police cars in the parking lot of the building and spray-painted over security cameras. Others shined green lasers at officers’ eyes and pelted police with softball-sized “river rocks” and glass bottles.

Two officers went to the hospital. A photo shared by the police bureau showed a 9.5-pound rock that was thrown by a person posing as “press” as the officer “prepared to ride away on a truck.” Several arrests were made.

Portland police are seen in riot gear during a standoff with protesters in Portland, Oregon on August 16, 2020. Protests have continued for the 80th consecutive night in Portland since the killing of George Floyd. (Photo by Paula Bronstein/Getty Images)

“At the time of this release over 60 calls for police service were holding around the city,” the Police Bureau said in a statement. “Some had been holding for the length of the events described here. Call types ranged from theft, vandalism, suspicious activity, hazards, hit and run, burglary, violation of restraining order, alarms, stolen cars, harassment and many others.”

Officers attempted to push the crowd back to Laurelhurst Park. Demonstrators swept through residential streets while people looked on from windows and porches at their homes, The Oregonian reported.

Meanwhile, a more than 17-hour crisis negotiation continued early Sunday in Forest Park, where an armed suspect has resisted police efforts to take him into custody for a mental health evaluation.

The man allegedly tried to break into an occupied home before 7 a.m. Saturday and made threats with knives before fleeing on foot. He barricaded himself in the park and claims to have a gun.

The Police Bureau’s Crisis Negotiation Team has unsuccessfully tried to draw the man out by offering water, food, and clothing, and sending messages from friends and family.  Officers also deployed tear gas, pepper balls, and impact munitions and sent in a K-9 unit, but the suspect, wearing body armor, tried to stab the dog, the bureau said.

Police said the man had been the subject of at least eight 911 calls over the past week.

Portland police are seen in riot gear during a standoff with protesters in Portland, Oregon on August 16, 2020. (Photo by Paula Bronstein/Getty Images )

PORTLAND TO ALLOW COPS TO INTERACT WITH SOME FEDERAL AUTHORITIES

As unrest continues in Oregon’s largest city, a group of about 30 alt-right demonstrators held a Patriot Prayer rally in front of the Multnomah County Justice Center Saturday afternoon, which quickly devolved in chaos as they traded paintballs and pepper spray with counter-protesters, KOIN-TV reported.

Counter-protesters reportedly chased rally attendees into a parking garage and what sounded like two gunshots were heard over the KOIN live broadcast.

Police spokesman Lt. Greg Pashley told The Oregonian that they are aware of the allegation that shots were fired and will investigate. No injuries were reported.

Protesters are seen during a standoff at a Portland police precinct in Portland, Oregon on August 15, 2020. (Photo by Paula Bronstein/Getty Images )

Last week, Oregon State Police announced they are leaving the city following a two-week assignment to help protect a federal courthouse that’s been a target of protesters.

While the protests for racial justice and against police brutality are generally peaceful during the day, drawing a wide swath of citizens, they have often turned violent at night.

Newly elected Multnomah County District Attorney Mike Schmidt decided not to prosecute people arrested for non-violent misdemeanors. Since the protests began, over 500 people have been arrested. So far, fewer than 50 are being prosecuted, according to The Associated Press.