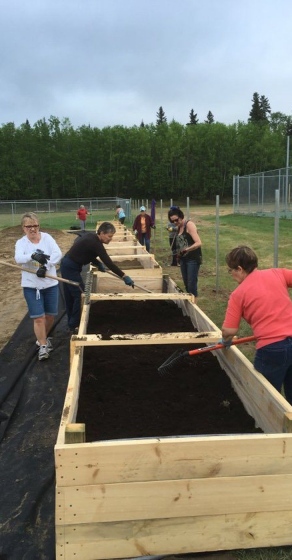 Gardening in Saskatchewan can look different from one hardiness zone to the next. For those in the north, learning to garden in harsher climes can spell healthier food and better food security.

According to the University of Saskatchewan, “hardiness zones are based on what unprotected plants in open areas can withstand.” For northern Saskatchewan gardeners, they not only have to deal with longer spring thaws but also different soil conditions and more wildlife compared to central and southern Saskatchewan.

For Tina Elliott, she plants her garden northeast of Prince Albert at the same time as her mother who lives right in the city. Elliott’s garden is a full two weeks behind, she said.

“You wouldn’t think that that little bit of a distance would make that much of a difference, but it does.”

Weather is unpredictable, she said, and while people are anxious to get their gardens in as early as they can, a hard frost can spell starting over.

“Everybody wants to get a garden in around May long weekend, which is generally a key point of time where people want to seed, but it’s way too early to put bedding plants out unless you have a small garden where you have the ability to cover things and protect them.”

While living close to Prince Albert does mean better access to grocery stores than some other rural areas, Elliott still sees how her own gardening is helping keep her grocery bill and those of her neighbours low. Everyone who has excess produce is always willing to share, she said.

“We grow a huge garden, more than we can ever use ourselves. So I haul a lot of stuff to my workplace as things are ripening and ready. If we can’t use it ourselves, then we’re giving it away or bringing it to work.”

Twyla Markham, project co-ordinator for the Candle Lake Community Garden, spent years working as a public health nutritionist in Saskatoon and food security was always at the forefront of her mind when thinking about gardening success.

Following a move to Candle Lake, Markham faced new challenges when introducing the concept of community gardens to the village council but also saw the health benefits and providing food security.

“We don’t have a full grocery store up here and so access to vegetables during the summer or any time of the year is quite difficult.”

What is available is a small grocery and bakery but the markup on items is quite high. Same at the grocery store in Paddockwood 34 minutes away, Markham said, and Prince Albert almost an hour away. These are not places you can just run out for a loaf of bread, she laughs.

Thanks to funding and support from local businesses, the Resort Village of Candle Lake and Communities in Bloom, the health region, and the committee, Markham said they built 50 four-foot by 12-foot garden boxes for residents to rent to grow their own produce.

Markham has never counted or kept track of the amount of food produced at the community garden but she sees the sheer amount of vegetables grown from each box and knows that it is put to good use.

This is their third year with the garden boxes and Markham said they are still working to expand the community garden. A fruit area was established with sour cherry trees planted last year. This year the trees are full of blooms, Markham said, and they will be planting more fruit trees in the future.

There are economical ways of dealing with wildlife, including deer, Markham said, with fences put up all along the community garden area and netting for each box.

Carey Ellison has two gardens, raised beds and container gardens at her house in Flin Flon and another in Tisdale.

Garage sales are better in Manitoba, she said, and Ellison has really expanded on her collection of gardening books, some of which with helpful hints written down that have proved very helpful to overcome the challenges of prairie gardening.

Weather is a challenge, she said, with high winds and torrential downpours wreaking havoc on her plants due to how her yard is shaped and unpredictable cold snaps making planting season a challenge in itself.

“It’s just too cold, even June 1 was too scary to leave anything outside with the risk of frost and still getting down to zero.”

With help from books and experience, Ellison’s goal is to grow as much as she can in her Flin Flon garden. Flin Flon has two grocery stores with the truck coming with stock once a week but bad storms, and now COVID-19, have made food availability unpredictable. There are many upsides to not having to buy fresh produce, she said.

“We like being able to go into the garden and not relying on the grocery store because half the time you get there, you buy a head of lettuce, you get home, and half of it’s rotten. We struggle with getting it to stay fresh enough if you’re not there the day it comes off the truck.”

While it does take a lot of work to maintain the garden, Ellison and her husband are both tax accountants with two offices. While tax season is busy, Ellison said she can start her seeds inside in March and have the summer to take care of everything.

Even with the challenges, gardening in harsher climates is not impossible. All it takes is time and knowledge, and of course, help from fellow gardeners.

Get Out of the Box With a Food Truck