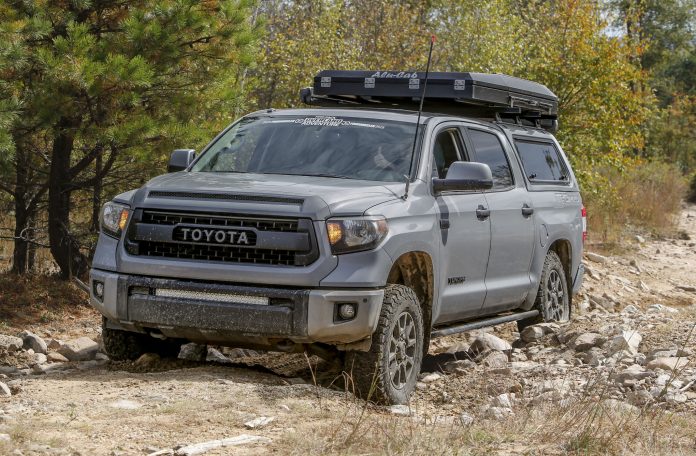 What’s it take to make a 2017 Toyota Tundra TRD Pro 4×4 ready for traveling backroads across North America? The answer is a concise list of carefully executed upgrades that make Jonathan Girard’s Tundra a formidable overland-capable backwoods bullet. Read on to see how he did it.

Tundra isn’t just the name of the 2017 Toyota pickup captained by Jonathan Girard; it’s where he often works and where he discovered his dream truck. “My first truck was a 2013 Ram,” he told us. “I bought it new from the dealership at a good price. It was a basic 4×4 and didn’t have too much, so I put in a CB radio and better tires.” Jonathan’s job in the mining industry took him deep into northern Canada, often for weeks-long shifts, and during his free time, the Ram was his tool for exploring backroads and playing in the sand pits.

A brief reminder about the climate of northern Canada—it gets cold. “One morning it was -45 degrees F outside, and the Ram’s engine just kept cranking and wouldn’t start,” he says. “I borrowed my friend’s Tundra, and I didn’t believe that it would start, but it did.” After driving the borrowed Toyota for a spell, Jonathan told us he took note of the interior, among other things, and just got that feeling. As you might expect, “I got home from work and traded my Ram in for a 2017 Toyota Tundra.”

“I’ve always liked traveling and exploring remote places,” he explained, and the TRD Pro-badged Tundra was the perfect vehicle for his transcontinental pursuits. And it didn’t require very much more than fine-tuning, either, to be ready for adventure. Jonathan upgraded and added items only when they were necessary for work or streamlined the adventure process. Working in the North where daylight is scarce? Lightbar. Soft-shell tent taking too long to dry out? Alu-Cab rooftop tent. Need to organize a month’s worth of gear in the truck’s bed? DECKED system. The list isn’t long, but everything serves a distinct purpose.

Jonathan’s Toyota has proven itself across the North America, covering miles of backwoods trails like a silver bullet. His travels take him from jobsites in the frozen tundra to the Swisha Loop in Quebec, into Newfoundland and Labrador, and also across the United States. He recalled a recent five-week trip with a friend and their Toyota Tacoma, leaving Canada in the winter and driving far enough south to where the weather was warm. “We took as many backroads as we could,” he said about the journey as they pushed into Amarillo, Texas.

From there the path included Albuquerque, New Mexico; the Gila National Forest; Tucson and Phoenix in Arizona; and even into California. There, the pair of vehicles explored Joshua Tree National Park and Anza Borrego State Park before seeing San Diego, then moving back north to tackle a bucket list item: the Mojave Road. Still not satiated, Jonathan and his friend explored Las Vegas and the Grand Canyon before moseying into the southern parts of Texas.

Where will you see Jonathan and his Tundra next? Alaska has been on his list for a long time, as have the woods of the Northwest Territories and the Yukon, but he acknowledges those ventures require a preponderance of resources and planning. Meanwhile, Jonathan is part of TORQ, or Toyota Off Road Quebec—a group that organizes everything from weekend outings to full-blown overland trips. He credits the group for stoking his interest in exploration. We met Jonathan during Overland Adventure East, where he gave us the full tour of his truck’s amenities; continue reading to see how he outfitted his Tundra for adventure travel.

The 5.7L V-8 in the 2017 Toyota Tundra TRD Pro has already chugged through 130,000 kilometers (that’s about 80,778 miles if our math skills hold true), and it’s ready for a few hundred thousand more. The governing philosophy for what’s been modified and upgraded under the hood is “keep it simple.” Everything’s as it was from the factory, and Jonathan plans to keep it that way.

After driving clear across North America and back again with the 2017 Toyota Tundra, Jonathan has put his wheels and tires through just about every driving scenario, from snowed-in mountain passes and mud to sandy washes and gnarly rocks. He thought about upping the measurements of his BFGoodrich T/A KO2s from 275/70R18 to 285/75R18 in the name of increasing ground clearance, but because that size is not widely available, it might not be the best option for when he’s “on a trip to the end of the world” and needs to find a spare.

Because the 2017 Toyota Tundra’s 145.7-inch wheelbase makes it particularly vulnerable to rocker panel damage, Jonathan began searching for bolt-on protection. “I couldn’t find exactly what I wanted. Being up in Canada, it’s hard to get some parts up there, especially if you’re thinking about fees for getting items across the border.” The least-expensive option for the Tundra turned out to be Jonathan’s friend with a welder. They created rocksliders from 1.25-inch-diameter Schedule 40 pipe that have valiantly defended the truck’s sheetmetal.

Although the TRD Pro package afforded the 2017 Tundra an aluminum skidplate under the radiator, Jonathan thought the transfer case and transmission also deserved protection—back to his friend with the welder. The duo built aluminum plates that were 0.25-inches thick and attached them to the Tundra’s undercarriage. He noted that his skidplates and rocksliders have been dragged “many times” across rocks, and his two-word review of their quality is “very solid.”

Jonathan used to employ a Pelican ice box for food storage. “It kept ice four to five days if I was safe, and it worked; it just got tiring looking for ice and draining it.” After some research, he landed on a 45L Unique electric fridge. He was surprised with how often he used the fridge, and the unit currently lives in the Tundra’s back seat, strapped into place and wrapped in an insulating jacket.

About working up north: “There’s a lot of light in the summer, but in the winter, there can be anywhere from a couple hours of light to no light at all. You want good lighting.” In order to keep the roads—and the sometimes bus-sized creatures that cross them—illuminated, Jonathan stealthily mounted a 30-inch LED bar from J-Lite Off-Road to the front of the Tundra. Why don’t you see a winch anywhere? “I drive like I don’t have a winch, and it’s kept me safe so far.”

“It’s not very high and not aggressive, but it is very comfortable” is how Jonathan described the 2017 Tundra’s TRD Pro suspension. He routinely puts the truck and its dealership-installed 2.5-inch lift through gravelly washboard gauntlets and rocky roads and has found no issue with the Bilstein piggyback shocks or the Old Man Emu Dakkar leaf pack. The truck’s differentials also contain the factory 4.30:1 gears.

Jonathan is a firm believer in paper maps and loves the experience of unfolding one on a tabletop in camp to plan out the day’s route. However, he can’t argue with the convenience of the Gaia GPS app on his iPad. Comms in the cab include his AnyTone Smart CB radio and a Spot X satellite messenger.

Planning for a multi-week adventure means carrying a lot of gear in the 2017 Toyota Tundra. Jonathan originally built his own sliding drawer system from plywood to organize his loadout. After a few rebuilds, he realized he needed something new. He scored a deal on a DECKED drawer system and never looked back. “I wouldn’t go without it now that I have it!” He describes the drawers as lightweight and a great use of space and says that it’s worked flawlessly on over 20 outings.

Jonathan’s DECKED drawers leave more than enough storage space under the bed cap. Camping supplies, recovery gear, and 60 liters of fuel are all held down, while his folding camp table and rooftop tent ladder live suspended from the roof of the cap. To the driver side of the bed, a wood box encloses a CAT Group 31 battery and fuse box. To its right sits a 5-gallon water tank and 12-volt pump with a hose that can be accessed through the cap’s passenger window. He loves the convenience of hitting a switch for on-demand water for cooking or washing. Jonathan keeps the green plastic tub stocked with firewood. He also travels with a full set of tools, any parts he’s replaced on the truck that can be used as emergency spares, and plenty of clamps, cable ties, and hardware.

Once camp is made, Jonathan wanted awnings to keep his working areas safe from the elements. ARB’s 1250 awning covers the tailgate while the ARB 2000 awning shelters the passenger side of the bed.

At first, Jonathan wanted a slide-in truck bed camper, but after considering the effects of its weight on the Tundra’s fuel economy, he went a different route. His soft-top rooftop tent worked for a while, but taking it down and packing it when wet, and subsequently drying it, became a nuisance. Next came the Alu-Cab Gen 3 Expedition tent mounted on a Rhino-Rack. “At the end of the day, you don’t have to think about it. Undo the latches and jump in,” is Jonathan’s testament to the convenience and simplicity of the system. He reports no problems in snow, rain, heat, or cold after more than 100 nights in the tent, and the custom-built reinforcements in the truck’s cap happily bear the tent’s load.

Why Air Pollution Hasn’t Fallen More With Everyone Driving Less :...