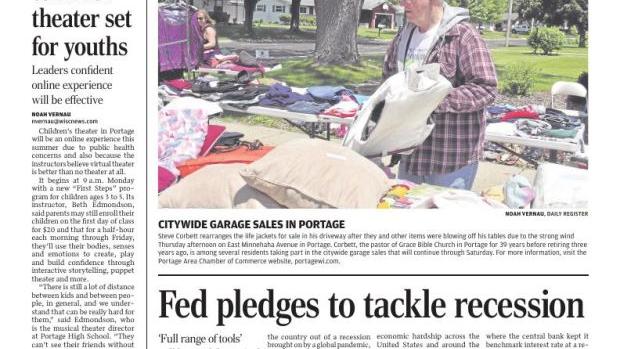 Xan Johnson, founder and artistic director of the Zona Gale
Young People’s Theatre, speaks to Portage High School students
about theater during career day in October 2019 at the school.
He’s also a professor at the University of Utah.

Children’s theater in Portage will be an online experience this summer due to public health concerns and also because the instructors believe virtual theater is better than no theater at all.

It begins at 9 a.m. Monday with a new “First Steps” program for children ages 3 to 5. Its instructor, Beth Edmondson, said parents may still enroll their children on the first day of class for $20 and that for a half-hour each morning through Friday, they’ll use their bodies, senses and emotions to create, play and build confidence through interactive storytelling, puppet theater and more.

“There is still a lot of distance between kids and between people, in general, and we understand that can be really hard for them,” said Edmondson, who is the musical theater director at Portage High School. “They can’t see their friends without as many play-dates, they don’t go to the playground as much as they used to and they didn’t get to finish school. This can be really isolating for them and so we’re excited about offering opportunities where they can connect and play with each other, even if it is through a screen.”

“The most important thing is that this helps to maintain a sense of belonging in a comfortable way that many young people understand better than the adults,” said Xan Johnson, the lead teacher for the CTW and YTW workshops. “They’re more practiced in connecting with others online. I don’t think I would ever want to teach everything online, but as a stopgap, this is a chance for them to improve their communication skills, stay connected with each other and explore something that’s already interesting to them: technology. Those are three big wins.”

Johnson, who teaches theater at the University of Utah, and other CTW and YTW instructors have been improving their virtual skills separately since late March, when schools closed their doors across the U.S. due to the global pandemic.

Instructors met online recently to practice various theater activities for the Portage students using the Zoom application — at times running off their respective screens and ducking under nearby desks.

“It’s a learning opportunity for us, too,” Johnson said. “There are a lot of features on Zoom — ways to manipulate the color and sound, for example — and I think we’ll learn, over time, what works and what doesn’t work online.”

Online learning is limited but nevertheless provides students with opportunities to learn in a social environment, Johnson and Edmondson said. They each prefer face-to-face instruction but said doing nothing this summer is a risky proposition — especially for the children who aren’t engaged in social environments from March through September.

Johnson noted that various studies had already shown that long summer breaks from school are often detrimental for many students and that their instructors, for years, have tried to combat summer learning loss.

Edmondson, who will contribute to the CTW and YTW programming in addition to leading “First Steps,” said their possible learning loss is compounded by the fact there are fewer programming opportunities for children offered by local libraries and parks and recreation departments this summer due to COVID-19.

“I think it’s important just for them to see each other, learn each other’s names and play a little bit using some different activities and exercises,” Edmondson said of young children in particular. “We know that some children might already be getting too much screen time, and that’s why we’re trying to keep it minimal, just a half-hour in the morning, so they’re not on the computer all day long.

“We also just want to build their interest in theater. As they get older, we hope they’ll come back to the workshops when they’re held again in person.”

Driver pleads guilty to manslaughter of 39 people found dead in...