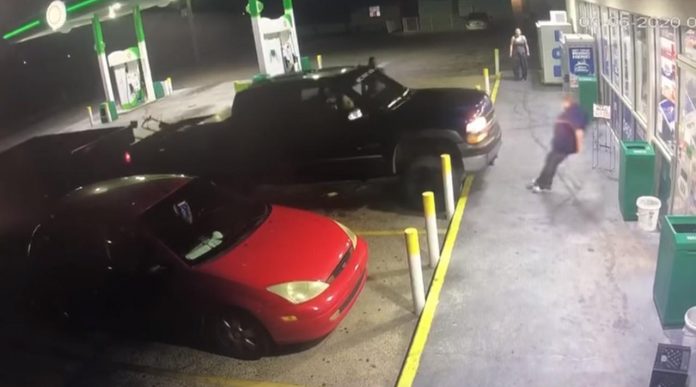 PANAMA CITY — A Panama City man was arrested after he allegedly tried to run over a service station worker with his truck on Wednesday.

The press release states that the incident, which was caught on a security camera, happened after an alleged verbal altercation between Bingaman and the worker at the service station on Cherry Street in Callaway.

The worker alleged that a customer later allegedly identified as Bingaman, had come to the store to pay for gasoline and was agitated, complaining about his relationship with his wife. According to the employee, the customer was not specific about what type of fuel he wanted.

When the suspect tried to put diesel fuel into his truck, he grew angry when he realized the diesel pump had not been turned on, the press release states. The employee stated she reset the pump, but that the man still seemed to be having trouble.

When he reentered the store, he was angry and complaining, demanding his money back. The worker described the suspect’s behavior as aggressive.

The worker stated that the suspect got into his vehicle to leave, still cursing her as he drove away. The worker then went outside the store, near the front and watched the suspect leave the parking lot in his truck, then return, driving straight at her, the press release states.

The security video shows the driver attempting to hit the worker with the truck, but was stopped by a parking pole.

The employee fell to the ground and the suspect then backed up and drove away westbound on Cherry Street.

The press release states investigators allegedly used identifying marks on the truck, including a business sign, to identify Bingaman as the driver.

Truck driver slams protesters who beat him unconscious when he stopped...