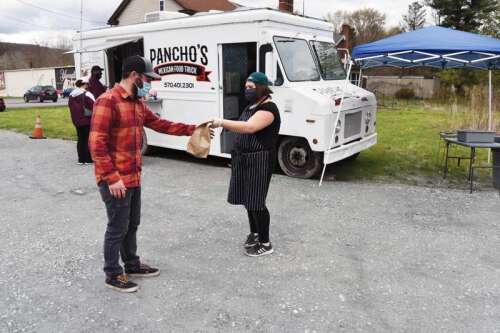 The dishes they prepare are memories and family recipes that have spanned generations.

They cook from the heart, with a menu that features food from the Yucatán Peninsula as well as different parts of Mexico.

Mike Gonzalez, who co-owns Pancho’s Mexican Food Truck with Lori Fairchild, said the reason why he didn’t name it a taco food truck is because he’s concentrating on the Yucatán Peninsula.

“The regional food from that part of the country is very different from the northern Mexican food that lot of people are used to,” Gonzalez said. “The food that I’m offering is very, very foreign to the people; it’s full of flavor.”

Gonzalez said that’s because everything is made fresh daily.

Gonzalez said the food truck just started up last week, adding that for the past year, he had been working at Bucky’s Grill at Beaver Run Rod and Gun Club in Lehighton following his retirement from the car business after 22 years.

“I always had a passion for the hospitality and restaurant business,” he said. “I left to run the restaurant full-time, and then the coronavirus hit us, shut down the club.”

Gonzalez – who has had the food truck since November – said the initial plan was to slowly roll it out for the summer.

“We didn’t have the manpower or logistics to run it, and once they closed the club and we had no income and no work, I started figuring out what’s another way of going about it,” he said. “The state actually gave us a permit for a truck. We got our license about two weeks ago and had to find a place to hang our hat.”

Gonzalez said this past week the food truck was set up at the former Lehighton Kia Dealership at 21 Blakeslee Blvd. The week before it was set up at Insurrection Distillery in Lehighton.

“The local businesses have been fantastic in helping us out,” he said. “Lehighton Kia and Bill Rosado, and Insurrection Distillery, Rod (Walck) and Tony (Serafino) were fantastic.”

Gonzalez said that moving forward, the plan is to be “Carbon County’s go-to spot for Mexican.”

“I am not going to leave; this truck is going to stay in Lehighton,” he said. “This is where I live, this is where my kids go to school, we go to church. I’m super excited to stay local, bring something different.”

Gonzalez said his customers have reacted favorably toward the food.

“The feedback has been incredible,” he said. “That’s what I love about social media; the people will let you know exactly what you think.”

Gonzalez added, “I know I’m challenging the preconceived notion of what Mexican food should be.

Gonzalez said he’s glad people are taking notice of the food truck and enjoying its food, “especially in this time when the coronavirus has forced many different businesses to close up, and we’re actually moving forward.”

“We’re small, light, nimble,” he said. “We’re busting our butts; we put in 13, 14-hour days just to make sure we have somewhere to hang our hat, (and) we’ll keep doing it as long as the good Lord allows us to.”

For the latest updates on their menu and the truck’s location visit them on Facebook.

Kyle Lick of Lehighton receives food from employee Guadalupe Gonzalez at Pancho’s Mexican Food Truck. The food truck was set up this past week at the former Lehighton Kia Dealership at 21 Blakeslee Drive, Lehighton, one week after it operated from near Insurrection Distillery in Lehighton. TERRY AHNER/TIMES NEWS

Improvising Through a Pandemic — UMOCA’s Online Education – The Daily...

Amid COVID-19, she reinvented her boutique as a houseplants shop. Business...