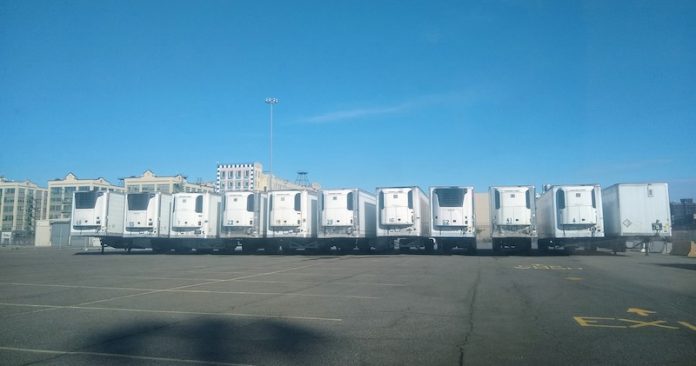 
Trucks have become the unlikely backbone and grim harbinger of New York City’s death industry as it grapples with COVID-19 body storage. It’s commonplace to see healthcare workers, truck drivers, or morticians decked out in protective gear as they schlep bodies into the back of a waiting truck.

Morgues and funeral homes have utilized these mobile trucks, described as “dark, dirty, and packed,” for storage and transportation of the dead, minus some outliers.

Serendipitously, the city’s Office of the Chief Medical Examiner (OCME) had been preparing a plan to further assist the city with its gross amount of bodies as the tipping point was reached.

The Disaster Mortuary Operational Response Teams (DMORTs) and the Department of Defense are supporting the OCME operations at the South Brooklyn Marine Terminal (SBMT) on Pier 39 in Sunset Park, which will serve as one of four disaster morgue sites citywide.

The guarded entrance to the South Brooklyn Marine Terminal. Photo by Ariama Long.

Even as the numbers trend down overall for coronavirus cases, hospitalizations, and deaths in the city, there is still a straining backlog of bodies from the illness and other possible causes.

Coronavirus victims will be stored in the freezer trucks up to 15 days if they’re not claimed by loved ones before being moved and buried on Hart Island, relieving pressure off overwhelmed funeral homes, crematories, and morgues.

Since then, the specific U-Haul trucks involved in that incident have been identified and removed from circulation for the time being, said U-Haul International’s representative Jeff Lockridge. He said they will be taken to a repair shop to be meticulously cleaned and disinfected from top to bottom.

The company issued an official statement that said, “This is a wrongful, egregious and inhumane use of our equipment. Our trucks are designed for household moves. Properly caring for the remains of people’s loved ones requires vehicles suited specifically for that purpose. Our trucks absolutely cannot be rented for this reason.” U-Haul Truck company officials say their trucks are not intended for use to store human bodies. Photo by Ariama Long.

Cleckley’s funeral home, who rented the equipment, was found in violation of the customer contract and will be unable to rent any U-Haul trucks.

Thankfully, there are no U-Haul trucks planted outside the Industry City entrance to the terminal, but there are easily spotted, giant white refrigeration trucks stationed along the perimeter, with military personnel and media at the gates.

SBMT, which is essentially a truck graveyard in more than one way at the moment, was built in the 1960s and used as a cargo hold and container terminal into the 1980s.

The 65 acres of the large, flat concrete space with a scenic view of the city’s skyline across the Upper Bay was a part of the city’s reactivation plan initiated in 2018. The terminal was intended to be used for things like waste paper recycling or importing industrial materials to increase jobs over the length of its long-term lease through 2054.

“We have spoken at length about the refrigerated trucks that have been deployed across the city to expand our morgue capacity and the fact that many of these are empty and thus require a place to be parked,” said City Hall’s Avery Cohen.

Now, SBMT will be a storage for empty trucks and also the site of the OCME’s long-term storage operation base during the crisis to ensure future incidents with body storage can be avoided.

This Columbia church’s pastor preaches from the back of a pick-up...