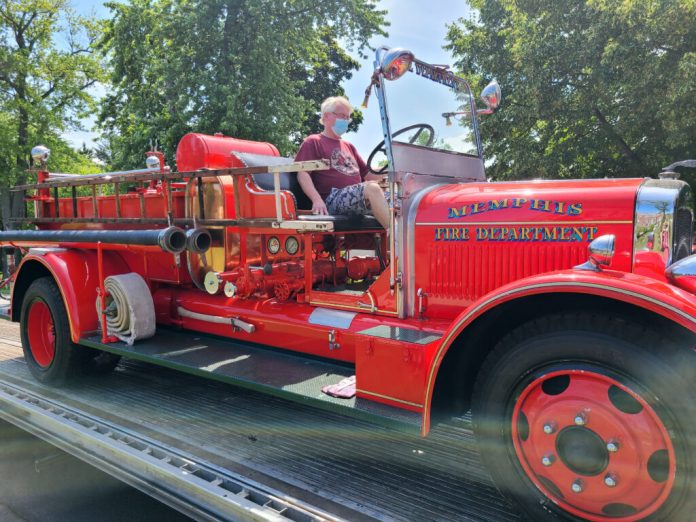 A project the Park Ridge Historical Society has been working to accomplish for the past eight years is finally coming to fruition this July, as the oldest surviving fire truck from the Park Ridge Fire Department’s early history returns to become part of the society’s permanent collection.

Few fire trucks last 99 years, and while there are some repairs and refurbishing needed, it still has some life and some history lessons to share on Park Ridge and public safety.

You’ll be hearing more about it in the future as the society starts raising funds to cover costs for acquisition and restoration. Information about the fundraising campaign is available at

www.parkridgehistorycenter.org/fire-truck-campaign. Donations can be mailed to the PRHS by mail to 721 N. Prospect Ave., Park Ridge, IL 60068.

Historical Society board member Brian Lazzaro gives a lot of the credit to Ralph R. Bishop, 93, a retired Park Ridge fire captain and local fire historian, who had kept track of the pumper truck all the years since it was “retired” and sold to the Drake Funeral Home family and then sold to a concern in Memphis, TN. More recently it has belonged to the Memphis Fire Department.

It’s called the “Lil Pirsch” now, but when it was bought, new, in 1921, it was made by Nash, Bishop explains. It was rebuilt in 1932 by Pirsch, a company based in Kenosha, WI. The original wheels had hard tires and wooden spokes. Bishop says the pumper’s original capacity

The Park Ridge volunteer department basically fought with two pumper trucks: this one and a 1925 Seagrave. Once the Nash equipment was upgraded, it was identified as a “1932 Pirsch.”

If there was a fire call, the volunteers would head to the fire station to get on the trucks. They did have a ladder that they kept perched on one of the trucks, but if they were going out beyond the city boundaries, they would leave the ladder behind, Bishop says. The only places high enough to need a ladder were in the city at that time.

The first true ladder truck added to the station fleet came in 1950.

Bishop followed a family tradition into the volunteer force. His father, Ralph E., was the fire chief and wore Badge No. 1. Two of Ralph’s mother’s brothers, Gus and Herman Mellor, Ralph’s brother Emmett and Ralph served on the Park Ridge department. The younger Bishops were just getting started when World War II broke out and they were drafted. Ralph came back.

Growing up around the department, and returning to make it his career, Bishop knew all the equipment. He was familiar with the models and manufacturers, learning to care for and drive the older trucks and fixing Model Ts and other vintage models. He remembers spending long hours at major fires in the area, pumping to keep the pressure up.

He remembers when the department upgraded its pumpers and retired the Pirsch and Seagrave. The Park Ridge Park District acquired the Seagrave, still in good condition then, and installed it in a local park. It was meant to be something local children could climb on, but he says the truck was trashed almost immediately.

The Pirsch was sold to the Drake family who owned the funeral home on Busse Highway (the property was later sold to the Cooney family). They used it as their float in local parades, and Bishop often would be asked to drive it. Eventually, the elder Mr. Drake sold it in Memphis, TN, where he had friends and business connections.

Bishop said they had offered him a chance to buy it then, but he didn’t have the money. It ended up at the Memphis Fire Department.

Through friends in local departments up here, he was able to keep track of it, and got a chance to visit it in Memphis, where he confirmed with his own documentation that the one in Memphis was the one from Park Ridge that he knew so well.

Bishop wasn’t sure he’d have a place to store it, and meanwhile, the price went up again. The historical society joined the crusade and after eight years and a sheaf of correspondence, they finally worked a deal.

“They didn’t want to part with it in Memphis,” Lazarro says. He and his son drove down to extend the payment and were able to get custody of the pumper and haul it home on a flatbed.

It isn’t ready for parades yet, but it is expected to get repairs and make some local appearances.

Enjoy award-winning local news by subscribing to the Journal & Topics in print or online.