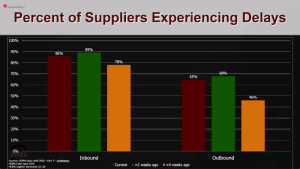 Business hasn’t turned the corner yet in the midst of the COVID-19 coronavirus pandemic — “we can’t even see the corner yet,” says MacKay & Company’s John Blodgett — but all corners of trucking’s equipment supply chain are beginning to see sales levels normalize as industry becomes more accustomed to the world’s new normal, noted Blodgett and others during the second Heavy Duty Manufacturers Association (HDMA) and MacKay & Company webinar on trucking business conditions held Wednesday.

After stating during HDMA and MacKay & Company’s first webinar two weeks ago that America and the trucking industry are likely to experience a W-shaped recession as a result of coronavirus, Bob Dieli, MacKay & Company’s chief economist, says he remains confident the economy will rebound in phases but was unwilling to place on timeline on how long it is going to take.

“I won’t answer that question because I don’t know,” he says. “We don’t know what the down leg is. When we finally know that and who was involved, the answer to that question will become a lot easier to formulate.”

Dieli says if there’s any good news to take from the last two weeks it is the relative stability of the construction industry. Dieli says residential construction in particular is “trucking extensive,” and says single-family and multi-family housing permits and starts were showing strong year over year totals through March. And as one of a select number of essential industries, most construction sites across the country remain open.

Richard Anderson, HDMA director, market research and analysis, says OEMs and component suppliers have spent the last two weeks developing long-term business plans to manage a crisis that it is now clear will not be coming to an end any time soon.

“The supplier community has learned [COVID-19] will require a long and sustained response,” he says. “The global supply chain has so much to learn from this process … much of what we see happening today is going to become standard business practices.”

Anderson says according to HDMA member surveys, the biggest challenges currently facing truck makers and component suppliers, after employee safety, is supply chain disruptions. HDMA surveys indicated 86 percent of suppliers are currently experiencing inbound product delays — a 3 percent reduction from two weeks ago — while 65 percent also are experiencing outbound delays. Anderson says in typical business conditions the smaller outbound percentage could be seen as a positive but that can’t be done at this time because it’s possible outbound delays are lower because of order cancelations. Even before coronavirus made its way across the globe, experts were expecting a relative downturn for North American equipment and parts sales in 2020.

Additionally, Anderson says HDMA survey results indicate average supplier shipper delays for inbound and outbound materials and semi-finished goods as 8.45 and 5.24 days, respectively. Those delays may not be a huge issue now as part demand is down, but they would become major impediments to a quick scaling up of production if OEMs start building trucks in May. Anderson says only 57 percent of HDMA survey responders believe they could begin serving OEM production lines with minimal to no delays by May 15. The supplier community also remains acutely aware and concerned by falling parts demand, and the health of its fleet customers and distribution channel partners.

Blodgett says survey data indicates flagging sales are due to falling freight totals and utilization in most markets, with only refuse and construction showing positivity. Service providers are also feeling the hit. Blodgett says independent service shops responding to MacKay & Company’s survey reported sales down 19 percent on average since the beginning of the pandemic. Dealer service shops were down 12.1 percent.

But, like supplier product delays and construction rates, business in the aftermarket also looks to be stabilizing. Blodgett says MacKay & Company’s updated projection for Class 6-8 and trailer aftermarket for 2020 remains $25.7 billion. That number is nearly 20 percent below the company’s projection from HDAW but equal to its initial adjusted projection released earlier this month. Looking ahead, Blodgett echoed Anderson’s statement regarding the health of the fleet customer base. He says 98 percent of fleet responders to MacKay & Company’s recent survey said their business was down, and by an average of 22 percent. Both numbers were slight increases from the previous week, where 90 percent of fleets claimed to be down 21.5 percent on average.

“Maybe we’ll start seeing a turnaround in May,” Blodgett says. “We don’t know. Our larger concern is what if the customer isn’t there to come back?”

Birge Back on Track After Boat Fire

Diesel Forward to have virtual expo