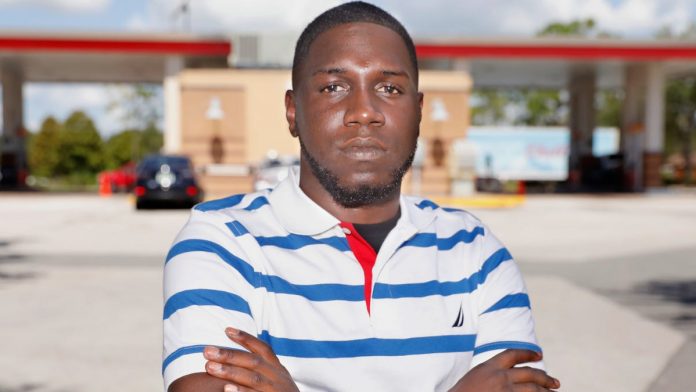 Lakeland resident Demetrius Haynes, 28, has alleged two officers harassed him during a routine traffic stop outside a Circle K in Winter Haven on Aug. 25 at approximately 9:24 p.m. He believes the incident was motivated by racial bias.

“I was a Black man sitting inside of a car,” he said. “That was the only law that was broken that night.”

Haynes said he stopped at the Circle K in Spirit Lake Crossing plaza on his way to work to use a public bathroom. After exiting the store, he sat in his parked white Chevy Suburban SUV checking messages on his cellphone when a PCSO cruiser pulled behind him with its light on.

Sgt. Heather Mundell, who is white, said a Black woman driving a maroon SUV had flagged her down by flashing her vehicle’s lights while Mundell sat in her parked patrol car outside Publix, according to her incident report. The unidentified woman said a man had followed her 15-year-old daughter to three different locations and was filming her. She identified the man’s vehicle as a white Chevy Suburban.

“You have the wrong person,” he recalled telling Mundell. “The woman needs to confirm it’s not me, there’s been some kind of mistake.”

Haynes said he offered to have the woman confirm or deny his identity, but was not given the opportunity. It was the conversation that spurred his complaint.

Polk County Sheriff’s Office would not comment on the details surrounding Haynes’ complaint and the incident until its investigation is over, according to spokesperson Scott Wilder, which can take up to 180 days to complete.

Prior to being asked for his driver’s license, Haynes claims he was questioned about whether he had any previous arrests. He admitted to one prior charge for possession of drug paraphernalia. While his license was being checked, Haynes said he called one of his coworkers using the FaceTime app to explain the situation and why he was delayed arriving at work.

Mundell wrote “the driver became furious during the encounter” and states she believes he was live videostreaming the stop.

Haynes alleges the sergeant asked a series of inappropriate questions about how he obtained high-end photography gear laying on his passenger seat. That is when Haynes said he felt accused of trying to photograph the woman and her daughter.

“That’s when I realized this was bogus, this was not a random coincidence,” he said. “There’s no way there is a coincidence that someone with a truck like mine who also has a high-end camera. I’m being harassed.”

Both Haynes and Mundell have alleged that the other threatened to inform their respective employers of the encounter and it would result in a loss of their job.

Mundell wrote in her incident report that she smelled alcohol and cannabis odor coming from inside the vehicle, and called for a backup traffic DUI unit. A scent or odor of a substance alone is not a probable cause for driving while intoxicated or under the influence, according to Wilder, which is probably why Mundell requested to search the vehicle.

Within five minutes, the county’s dispatch records show a second PCSO cruiser driven by Deputy Russell Piche, a white male, pulled up to the scene. Haynes said he gave consent to a search of his vehicle.

“I didn’t want to let her search, but I told her to go right ahead,” he said. “At this point, she’s trying to push a button.”

Tucked in the center console of Haynes’ vehicle was a Challenge Coin he received from the Lakeland Police Department — a special medallion given to members of an organization or one who has received special recognition from the agency.

“I didn’t see them pick it up physically, but I saw how everything changed,” he said.

Haynes said he was asked several questions about what exactly he did for a living — a foster care advocate for Integrity Care — and what else he did.

Mundell stated the driver had advised her that he was a member of the LPD Citizen Advisory Board and worked as a videographer for an elementary school, according to her report.

The traffic stop lasted approximately 50 minutes according to a dispatch report from Polk County Sheriff’s Office. Nothing illegal or incriminating was found inside Haynes’ vehicle, according to reports. He said he sat in his parked car until law enforcement left.

Haynes has made several posts on Facebook regarding the incident and alleged harassment in the days following which, to date, have received more than 250 comments and 1,000 shares. The sheriff’s office is aware of the posts saying they contain several insulting and defamatory remarks by Haynes and other commenters.

The officers involved, Mundell and Piche, remain on active duty as the sheriff’s office completes its investigation.

Haynes said it’s not the first time he’s been pulled over as a Black man and given consent to have his car searched.

“It’s happened a lot,” he said. “I was driving my car, had a license and such by [age] 16. I remember getting pulled over all the time.”

Haynes said he originally submitted an application for Lakeland Police Department’s nine-person panel as it gives him hope for improving communication and relationships between the Black community and law enforcement officers. Yet, he admits to struggling since the Aug. 25 traffic stop to stay positive.

“I believe our law enforcement needs to operate with integrity,” he said. “With you harassing me, we can’t work together to help our community.”

Government promises increased patrols after delivering 50 pick-up trucks to the...