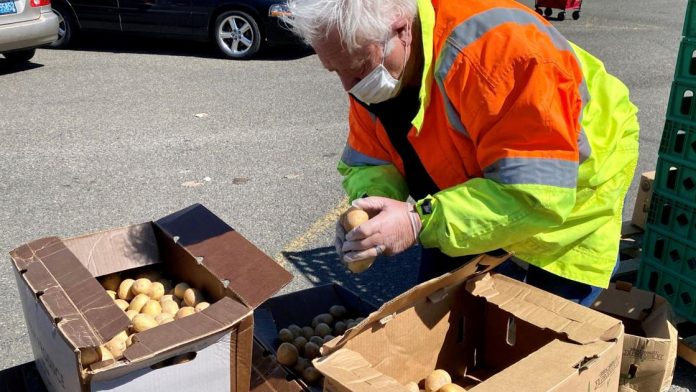 NORTH BEND — Pelican Harbor Food Bank has not only returned to the area, but already helped feed over 800 families in the past week.

The independent food bank’s co-founder, Laurel Broman, said she can’t recall ever seeing this many people show up. And she has participated in the monthly giveaways for over 15 years.

Pelican Harbor reopened this month and hosted four different food giveaways so far as a way to help residents struggling through the coronavirus-driven recession. And on Thursday, the food bank’s volunteers handed out thousands of pounds of food to hundreds of families impacted by the pandemic.

The food bank’s commercial truck, which usually holds 43,000 pounds of food, stood in the parking lot of the Pony Village Mall near volunteers as they handed out items.

From April 1 to 8, the food bank has so far received over 100,000 pounds of food. According to Broman, more than 800 people showed up last Thursday to pick up food.

All in this together, Broman said the families who attended Thursday were very sweet and thankful to be receiving their help.

This month also saw an increase in volunteers. According to Broman, a majority of their volunteers are considered to be at a higher risk for more severe complications from COVID-19 based on their age and underlying health conditions.

“Our volunteers are absolutely fabulous,” said Broman. “They are so devoted … and really some of the best volunteers I think I’ve ever seen.”

Ready to work, volunteers showed up Thursday with their own masks, gloves and other protective gear. With more folks volunteering, Broman said the food bank is in need of additional masks and is currently accepting donations.

“Our (commercial truck’s) engine is not as healthy as it used to be,” said Broman. “We’re looking for a replacement and so if someone wants to donate one that’s something we could definitely use.”

Last month, the food bank’s beloved co-founder Joan Daniels had a heart attack and passed away. Her passing, coupled with the COVID-19 outbreak, caused the group to temporarily cancel its food giveaways, said Broman.

A number of safety reasons also contributed to it halting its operations, but after noticing the great need and demand for food, Broman said they knew they had to come back. In honor of its co-founder, the Pelican Harbor Food Bank did just that and returned to work to help feed hungry families.

“It feels good and it’s the right thing to do,” said Broman. “It’s God’s food bank and God provides well.”

For more information on when the next giveaway will take place, call its outgoing phone line at 541-456-6696. Anyone looking to volunteer, donate face masks or assists with the food bank’s truck repair project, email noemptytummies@yahoo.com.

Letter to the Editor: An idea to help local restaurants and...