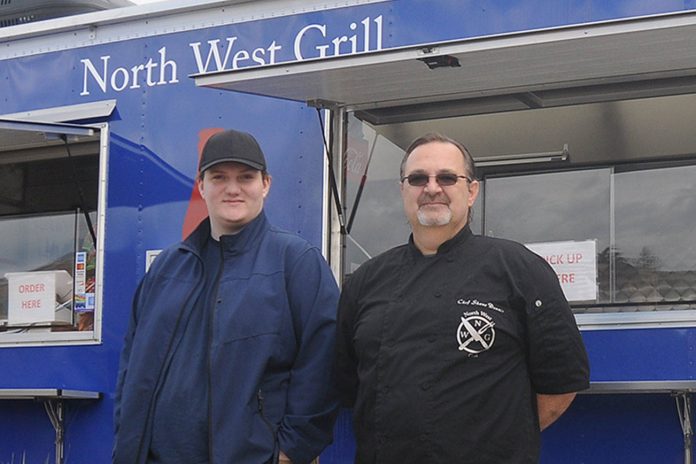 Once he got the gumption, Shane Dennis was all in running a food truck — something he’d been dreaming of for years.

The only hesitation came in March, about a week before Gov. Jay Inslee issued a “Stay Home, Stay Safe” order.

“I thought, ‘I better hang on’; I didn’t know what was going to happen,” Dennis said.

Turns out he needn’t worry, if the first few weeks are any indication.

Dennis saw massive lines build and back into the parking lot he shares with Tracy’s Insulation following the opening of North West Grill, a food truck now open in Carlsborg.

“Oh my gosh — insane,” Dennis says. “There are days I have to close early.”

It’s the latest in several culinary stops for Dennis, who earned a two-year culinary degree in Birmingham, Ala., and has cooked in a variety of situations before he and his partner wound up on the Olympic Peninsula, their most recent move taking them from Wyoming.

Dennis said that when he couldn’t find the right fit for a job on the peninsula he took the initiative to follow his food-fueled dream, opting for the truck rather than a restaurant setting.

“You don’t get to meet people that much (cooking in a restaurant) — I’m very much a people-person,” he said.

“Mainly (I chose the food truck) because it’s mine. I make the choices, what goes in, what goes out.”

That starts in the morning with a trip to Sunny Farms Country Store, conveniently located just across US highway 101, where Dennis stocks up on locally-sourced food.

Along with hamburgers and hot dogs, North West Grill’s primary menu choice is the street taco — something Dennis said he couldn’t quite find in other area restaurants — with beef, pork and shrimp varieties. The “turf” ingredients get marinated and cooked over nearly 24 hours and topped with fresh ingredients and seasoning.

After a soft opening, North West Grill opened for good on May 4. And oh, what a reception. By 11 a.m., a line stretched into the distance and Dennis said he and David Burnham, Dennis’ only other employee (for now), worked straight until closing at 6 p.m. and didn’t get out of the truck until 8 p.m.

“We were not ready for that amount of people,” Dennis said. “I was exhausted.”

Chef in the making

Dennis grew up with a hankering for the kitchen: In his formative years in Montana spaghetti was his go-to dish, eventually expanding to whatever family members brought home from hunting trips.

He worked for years in food service settings before tiring of working minimum wage jobs, taking the plunge to get his degree in Birmingham. That led to a 15-year career (so far) in restaurants, hotels and hospitals along the way.

But the food truck idea kept coming into his mind, Dennis said.

“It’s always been a dream of mine, but I just didn’t have the courage to do it,” he said.

Seeking quality equipment for his venture, Dennis said a simple internet search led him to the Portland, Ore.-based Quality Food Trailers. Company staff sat with him to get the design down, from curved floors in the interior (makes for easy spray washing if needed) to sealed spaces between equipment and the walls (to avoid food or debris literally slipping through the cracks).

The company provided everything, Dennis said, save the logo, which he got paid for by the Coca-Cola company in trade for offering their products.

While the food truck was a long-standing hope, its location came without much searching. An employee from Tracy’s Insulation who had visited Dennis and Parker’s home for an inspection said Dennis should have a conversation with business owner Tracy Bloom.

“I was so excited; I wanted (more) food to come in to Carlsborg,” Blume said. “I’m really happy for this guy.”

Dennis got the go-ahead and expected to set up on a bit of convenient gravel. Instead, Bloom built him a concrete pad to set the truck, along with a covered patio for seating.

“He was so excited to have food here,” Dennis said. “(Tracy) has been amazing.”

For Blume, the new neighbor was a no-brainer. With employees from his business and the adjacent Country Acre Childcare business, plus others using the property to access businesses to the south, Blume figures he has about 90 people coming through his parking lot each day.

“To me, Carlsborg is a working town; it’s open pretty much 6 a.m.-6 p.m. After that, work is over, everyone goes home,” Blume said. A full dinner restaurant might not work, but something offering breakfast, lunch and a light dinner could.

That’s one of the reasons Blume said he was happy to connect with Dennis and Northwest Grill. The food truck addition, Blume said, is just part of an expansion on the property that he said will include more amenities to the eating area (outdoor heaters, windows, wifi), restrooms, a dog park, drive-thru coffee/food stand and eventually a new office, as Tracy’s Insulation has outgrown its current one, Blume said.

Also with eyes on the future, Dennis said he’s looking at adding to North Wet Grill’s menu (fresh halibut), the staff (a third employee) and some expansion (a small building for expanded food storage).

Said Dennis, “I won’t have to close early.”

Do not allow negative emotions to overwhelm you | Laramie

Burglars with a sweet tooth in Michigan leave trail of candy...