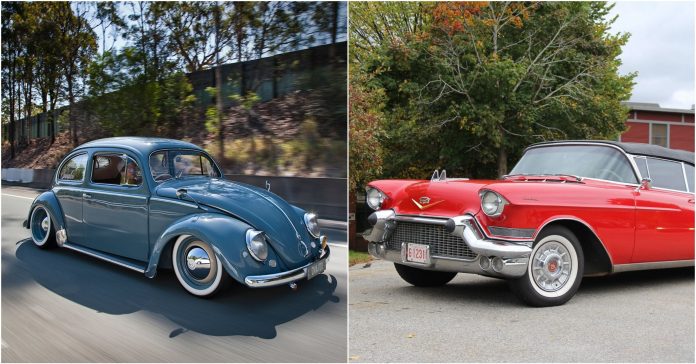 Have you ever seen a beautiful well-kept vintage car while at a car show, or just walking around? Have you thought on such occasion “I wished I had lived that era when cars were so much cooler”? Well, you are not the only one.

There is still a huge community that cares and drives vintage cars. But, what is it about classic or vintage cars that still make people drive them instead of switching to a newer car? Are all old cars cool enough to be driven today, or are some of them cooler than others?

What makes an old Chevrolet more valuable than a modern one? Well, here you have 15 vintage cars that are just so good that people still drive them 60 years after they rolled out the factory.

Before you wonder, yes, this is the Declasse Tornado from GTA V, with a slight difference on the front end. The 1957 Chevy Bel Air is highly wanted by enthusiasts and collectors. This generation carried the 4,6L V8 that produced 280 hp with the optional “Super Turbo-Fire” engine, but this car is not sought after because of its performance, but because of its styling and what it stands for: a classic, spacious, and comfortable American car from the ‘5os with a bit V8.

Corvette’s production started in 1953 and was the first American sports car. This 1957 model of the C1 generation, was equipped with a 283 cubic inch (4,6L) V8 that GM claimed to produce 1 hp per cubic inch. Because of its poor engineering and in spite of its amazing styling, this is the third least-sold model in Corvette’s history. However, today these are pretty expensive.

The 356 was the first mass-produced car from Porsche. The platform is (not surprisingly) based on the VW Beetle chassis. This 1955 Speedster had a 1.5L engine and a 4 gear manual transmission that produced only 55 hp. Due to its rareness, one of these can cost up to 200k, but don’t worry, there are many companies that are glad to build you a nice replica for much less.

It was born as a cheap and reliable car for the masses in Nazi Germany in 1938, but it wasn’t until 1946, after the war ended, that the car really started to hit the market. This 1956 exemplar was equipped with a 1.2L four-cylinder air-cooled engine that produced 35 hp. By the end of production, over 21 million units had been built and sold.

RELATED: 10 Most Iconic Volkswagen Beetle Models Of All Time

This tiny car is a collector’s classic as there are not many left. It was produced from 1955 to 1962, mainly aiming for a post-war Germany that needed cheap transportation. Back in that day, it cost 2550 German marks or $1500 US on today’s money. Nowadays you can find one of these anywhere from 10 to 70-80 thousand dollars.

In 1937 Michelin bought Citroen and gave the new director, Pierre Boulanger, the specifications for a new project. The car needed to have 4 seats, just 2 hp, front-wheel drive, a top speed of 60km/h, a 3 l/100 km range, and a suspension able to cross a field with a basket of eggs and break none of them. The 2CV was produced from 1948 to 1990, and became a European idol, alongside the Beetle and the Mini.

After the end of WWII, Dodge decided to introduce a truck based on the 3/4 ton one used by the military. This truck was capable of going anywhere, powered by a 3.8L inline-six producing 94 hp. It was so good, that it practically didn’t have any changes during its whole production run. Finding one of these might be difficult (and expensive) today, but it is definitely a car worth owning.

The VW Type 2, a.k.a the “Kombi”, is sort of a bus version of the VW Beetle. This 1955 model, better known as the “Samba” was fitted with the same air-cooled engine and 4 gear transmission as the Beetle listed previously, and just like the Beetle, the engine was fitted in the back. This model had side-opening passenger double-doors and 23 WINDOWS. Production started in 1950 and it stills goes on today.

Produced from 1955 to 1982, this Italian city car was built in Italy and Argentina only, where it became an icon because it was cheap, had a nice Italian design, and an amazing fuel economy. It originally came with a 600cc four-cylinder engine fitted in the back that produced 21 hp, but for the Argentinian market, it evolved to a 767cc, and finally to a 36-hp 797cc engine for the 600R.

The Le Sabre is an American full-size sedan produced from 1959 to 2005. This 1960 model received a major facelift from the 1959 model but kept the engine options: a 364-cubic-inch V8 that delivered 250 hp, and a four-barrel version of the same engine with an output of 300 hp. The third option (with no extra cost) was a 235-hp version of the same engine, with the difference that it allowed the use of regular-grade gas.

The Eldorado got its name from the legend of the Lost City of Gold, and it was manufactured by Cadillac from 1952 to 2002, and was the most expensive Cadillac model at the time. This convertible version of the 1957 model was named “Biarritz” and had a 6 liter V8 putting out 300 hp that allowed this 2,3-ton boat to reach up to 115 mph.

RELATED: Everything You Need To Know About The Chevy Impala

Due to its layout, the Mini was not just popular, but a game-changer. Furthermore, it was voted as the third most influential car of the 20th century. This mini car was produced from 1959 to 2000, and thanks to its transversal engine and FWD configuration, it allowed the passengers to use 80% of the floor pan space. The engine was an inline-four 848-cc that produced 34 horses. The same car was also built and commercialized by Morris and Innocenti under license, until BMW acquired the Rover Group and started manufacturing the Mini as we know it today.

NEXT: 15 Greatest Classic Cars Of The ’60s That Are Now Cheap


Next
15 Toy Cars Worth More Money Than Your Real Car

Homero is an 18-year-old car enthusiast from Cordoba, Argentina. Currently studying Industrial Design and dreams about being a car designer someday.

Truck AVN to Expand Substantially Owing to Technological Innovations During 2020-2027...