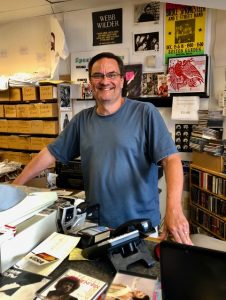 “The LP (from “long playing” or “long play”) is an analog sound storage medium, a phonograph record format characterized by a speed of 33 1/3 rpm. Introduced by Columbia in 1948, it was soon adopted as a new standard by the entire record industry until its gradual replacement from the 1980’s until the early 21st century, first by compact disc and then streaming media.” —from Wikipedia, the free encyclopedia

In a nutshell, at least from the early 1970’s going forward, this sums up the facts that Phil Breen has navigated in his life in the record business.

Phil Breen at his station behind the counter. (Photo by Ginger Dawson)

Early on, he had a fascination with music and this analog sound storage medium. In high school, as soon as he could, he patronized record stores any chance he could get.

He went over to Clifton in Cincinnati and bought used records at Mole’s Record Exchange and Ozarka, to name a couple.

In Covington, in the late, not lamented Old Town Plaza (Pike St. between Madison Ave. and Washington) there was Lemon Starship (if that doesn’t pin an era, I don’t know what does) and also the long-established Gates Records.

Phil particularly enjoyed visiting Gates Records located at 11 W. Pike St in Covington. The business had been there for years, even before the Beatles exploded onto American pop culture in the early 1960’s. Helen Gates and her family ran it, and she was always ready to talk and tell stories about the record business. In addition, Phil knew Mrs. Gates from church.

“She was a sweetheart and told me about kids lining up waiting for the truck to deliver the latest “little guys” (7” 45’s) from the Beatles. Kids knew the release dates and there would be long lines and sometimes she’d pass out doughnuts. How cool would that be?”

Phil had graduated from Dixie Heights High School in 1977 and quickly discovered that he had an uneasy relationship with the idea of college. He was in and out of it. A good break came when he was offered a job at Record Alley in Erlanger, a few months after it opened in 1979. He learned all of the ins and outs of running the business: inventory, ordering, payroll and in-store promotions. 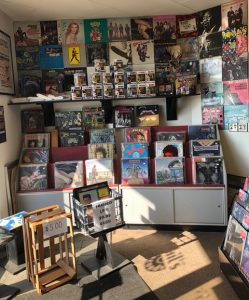 A sampling of the wares at Phil’s Records.

After a few years, he was ready to open his own record store. On Sept. 1, 1989, Phil’s Records opened its doors in Ft. Thomas.

He had amassed a personal collection of over 3000 record albums, two thirds of which would be a big part of his opening inventory.

Phil was ambitious and expanded to a second location in Ft. Mitchell the next year, and then, in 1991 he opened four more stores in an agreement with Sight In Sound, a chain of home audio/stereo equipment stores.

It was a crazy time. The stores were open seven days a week, business was great, and Phil’s Records sold tickets for area events through Ticketmaster, a computerized online ticket-selling platform.

Also, around this time compact discs were edging in on the production and sale of vinyl records. It looked like CDs would be the next big thing, and vinyl looked like it might be going the way of the dinosaurs as even manufacturers were not interested in the quality of it as a product.

Phil also managed to get married that year to his wife Donna. It was quite a year. 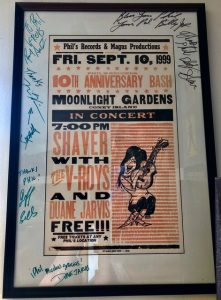 One the occasion of Phil’s Records ten year anniversary, Phil threw a free concert for his clientelle to show his appreciation. Shaver with The V-Roys and Duance Jarvis FREE! (Photo by Ginger Dawson)

Then, by the early 2000’s the internet and digital everything was pressing down on even the sale of compact discs. The writing was on the wall. Phil downsized as he had to, and in 2013 moved to his current location at 3914 Winston Ave. in Latonia.

It is a great, old-school used record store. He gets the stuff. After having been in the record business for 41 years, he has a seriously deep bench of customers, as buyers and also sellers. These relationships have helped him hang in there.  In fact, the current location in Latonia is right next door to the business of long-time customer John Humpert, of Klingenberg’s Hardware fame.

Phil has learned (sometimes with the rub of difficult personalities) that if you treat people well, that goodness will come back to you.

Another thing about Phil is that he is innately honest and speaks his mind without reserve, but with discretion. This, coupled with self-deprecating humility, is a very big part of his good reputation.

And as such, he has gotten the opportunity to sell several major vinyl collections—the kind comprised of the quality and scarcity that vinyl collectors lust after.

Phil, of course, has important ephemera. This is an original poster for the historic breakthrough concert by Bruce Springsteen at the Bottom Line in NYC in 1975. Not for sale. (Photo by Ginger Dawson)

CDs are big too. As he says, “It kills me to hear about somebody just throwing out their old CDs.” Take them to Phil’s Records! And then buy some more!

Phil has watched the music business change from one of networking personally with customers, musicians, and music industry people to one without the warmth of human interaction. When you can find anything you want with a few clicks on a screen, why would you bother to take the time to actually talk to anyone?

In the analog age, Phil researched music and listened and read.  He was up on all of the latest music coming out, and as such, could advise people on what to listen to. He read liner notes on albums and read reviews. “Rolling Stone, when that was a real magazine and not the nonsense that it is now; record reviews used to be mini novels—two or three pages.  Now, it’s only two or three lines.” Even Rolling Stone had to change.

As the owner of a high volume record store, he enjoyed a prestige that was common in the era of “backstage passes.” He went out everywhere, could get into any club, knew everyone and everyone knew him.

He was an “influencer” before being that was even a thing. 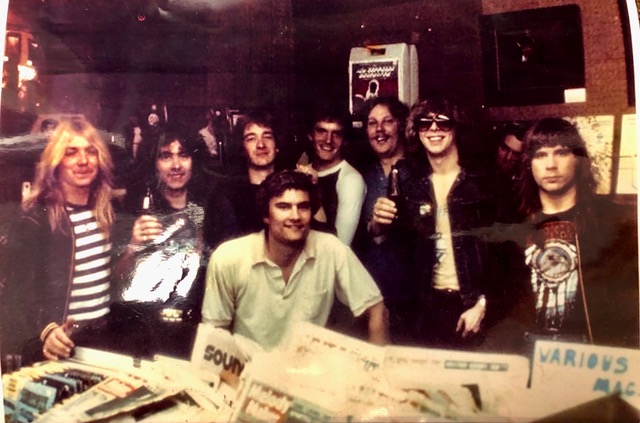 The digital age changed it all, but true to form, Phil acknowledges not just his own experiences, but sees that it has been “a crushing change for the creative person.”  Musicians now can put out their own work—it has certainly changed that, but how do they get paid?

Phil and his wife Donna have been married for 29 years and have two kids. Trey (22 years old) and Lexy (20 years old) are students at the University of Louisville.

Since Phil had that uneasy relationship with college himself, he is very proud of their dedication to it and their participation in RaiseRED, a student-run philanthropic organization that benefits The University of Louisville Department of Pediatric Oncology and Hematology, through the fun of a mini dance marathon.

Trey and Lexy are also into vinyl. Phil, through his own passion and accompanying stories of his life in the record business have no doubt fostered this. Lexy has stepped in to help dad stage and decorate the store, (“As Neil Young said, a man needs a maid”) and their interest in it and has helped him reinvigorate his dedication to Phil’s Records. 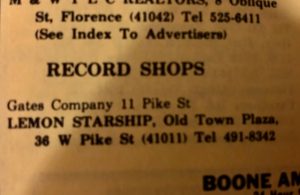 And, the culture looks like it might be coming back around to vinyl, too.  In an era where digital media has pre-empted human connection, there has evolved a search for authenticity in experiences of all kinds.  This includes music with a richer, more tactile, and even visual dimension.

Young people are coming in to the store, and are bowled over by what they see. This is what they are searching for.

Record Albums, and CDs too, with their fanciful covers, sleeves, and liner notes offer up a completely different experience than that from just tapping a screen.

Older customers, too, are searching for this same experience, but with perhaps a slightly different motivation. The day that I was there for this interview, a gentleman in his fifties had just resurrected his old turntable and albums that his mother had saved for him. It was his first time in, and he made a few purchases. He was impressed with the selection and said he would be back.

Phil always understood this authenticity of experience. As he says, “When playing a record, you are making a conscious effort to listen to that music.”

For him, it is not just background noise or a click on Spotify.

A current photo of the storefront that housed Gates Records. It looks like it probably did when kids were lined up for the Beatles 45s. (Photo by Ginger Dawson)