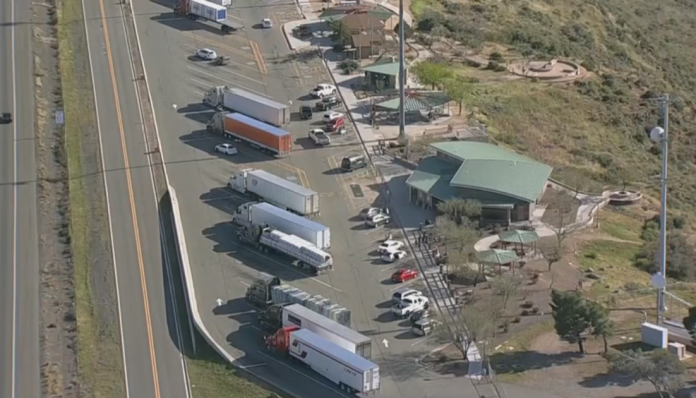 PHOENIX (3TV/CBS 5) — For the first time, a Phoenix food truck will serve its cuisine at an Arizona rest area this weekend. It comes after Gov. Doug Ducey announced a change this week that allows them to get the proper permits.

Brian Morgan and Fermina Carmona own the food truck “Red Ginger.” Like every other industry right now they have had to adapt. All their major events were canceled this spring, so they just got a 30-day permit to operate out of the Sunset Point rest area off I-17.

“It can be tough for a truck driver,” Morgan said. “I mean, you drive 12 hours that day then you stop. And do you really want to go into a grocery store and try to make a cold meal?”

The Arizona Department of Transportation says up to three food trucks at a time will be allowed at these eight locations:

A spokesperson says this is for everyone’s safety and the idea is to allow for social distancing and for traffic to flow through the area. The list of rest areas may expand depending on the demand, according to ADOT. Right now, it says 22 food trucks in the state are going through the permit process.

It’s not as simple as just hopping on the highway, Morgan said. And it may not work for every food trucker.

“You’re moving an entire commercial kitchen on wheels up a mountain or an hour away,” he said. “And then, you’re completely self-contained and self-sufficient. Power, water, equipment — everything.”

Because this is new, no one really knows how many big rigs will be waiting in line. But Morgan and Carmona are happy to offer something different to those who help us.

“We’re going out to these rest stops because we want to support these truck drivers that we see on the road every day,” Morgan said. “You know, it’s like on a Saturday,we’re driving up the mountain because we’re taking our kids fishing, and there’s some guy next to us in a big rig, and he’s driving food to Flagstaff.”

“We’re mobile,” said Kloster. “Restaurants can’t go to where the people are.”

Arizona’s Family also spoke to Kyle Hollenback, a founding member and director of sales for Aioli Gourmet Burgers. They operate three food trucks including Aioli, Modern Tortilla and Oak Wood-Fire Pizza. While he says he applauds the efforts of Ducey and loves having more options to operate out of a rest area, it’s not feasible right now for a number of reasons, including what it would take to pay employees to make the trip.

Hollenback says one way they have adapted is through fully prepared meals. They also have been serving first responders and donated thousands of meals, including some to the people at Phoenix Children’s Hospital.

A lot of the food-truck scene is planned locations like an office building, Hollenback says. But with so many people working from home, that’s been wiped out. If there is any silver lining to this, Hollenback says they hope people will come back from this wanting to go out and order food for big events like weddings and graduations that have been canceled.

If a food truck operator has questions about working at a rest area, Morgan says you can contact him through Facebook.

MERS Goodwill reopens some of its stores, including the three in...