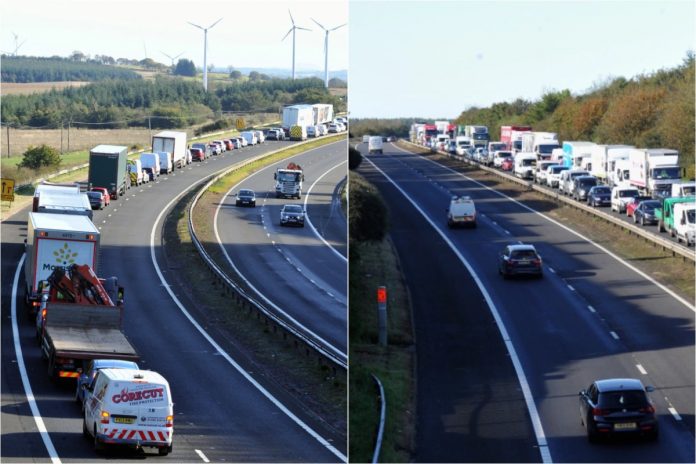 TWO separate smashes has seen parts of the M8 locked down this morning.

Emergency services raced to the scene of a serious crash between Edinburgh and Glasgow just after 4am.

The road is closed on both carriageways, at junction 4a westbound and junction six eastbound, between Whitburn and Shotts.

One onlooker said a small pick up vehicle is completely crushed after colliding with the back of an HGV.

Eastbound traffic is currently backed up to Newhouse and drivers face a 95 minute delay.

Westbound traffic faces a wait of only 15 minutes.

Commuters are urged to find a different route.

And now, a second crash on the eastbound section between junction 6a and 6, near Newhouse, has closed down another section of the motorway.

A Police Scotland spokesperson said: “Officers are currently in attendance on the M8 near to junction 5 at Shotts following a road traffic incident.

“Police were called to the scene at 4.05am on Friday, 2 October.

“The road is currently closed in both directions between junction 4 and junction 5.

“Emergency services remain at the scene and drivers are asked to avoid the area, where possible.”

Tweet 2/2
Officers are working to alleviate the traffic and turn motorists around.
Drivers are thanked for their patience while enquiries are ongoing.

Boy, 13, knocked down by car in Falkirk as police lock down road

‘do the right thing’

Of the second crash, they added: “Officers are currently dealing with a second crash involving two vehicles on the M8 eastbound at junction 6A, which happened around 7.45am on Friday, 2 October, 2020.

“Emergency services are currently in attendance.”

An update from cops on Twitter reads: “Officers remain in attendance at a road traffic incident on the M8 near to junction 5 at Shotts.

“Emergency services are still at the scene and the road is expected to remain closed for some time.

“Officers are working to alleviate the traffic and turn motorists around. Drivers are thanked for their patience while enquiries are ongoing.”

‘It is the highlight of my day’: McKinney boy and trash...