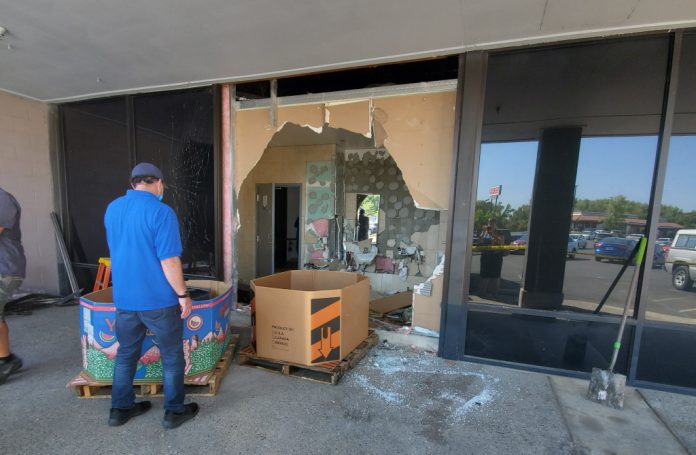 RED BLUFF — No one was injured Tuesday morning when a woman crashed a pickup through an outside wall at FoodMaxx at the Belle Mill Shopping Center.

Police responded to the incident about 9 a.m. Tuesday and learned the driver, whose name was not released, had mistaken the gas pedal for the brake pedal and the white Dodge pickup collided with the building, bursting through into the men’s bathroom, said Sgt. Kevin Busekist.

“Had anyone been standing inside (the restroom) it would have resulted in serious injury or a fatality,” Busekist said. “Fortunately, no one was in there and there were no injuries, but it did considerable damage to the bathroom, including a water leak.”

The woman, a 69-year-old Red Bluff resident, was not hurt, Busekist said. The damage to the men’s restroom extended into the women’s restroom.

One of a few employees assisting in assessing damage and cleaning up the area said he was outside of the building on a break when the crash occurred. After hearing a boom and seeing the water he thought there had been an explosion.

The employee said if the truck had been another few inches deeper into the building, it would have been impossible to get the woman out through the back doors.

Another employee said he was on his way to the bathroom when he heard the boom from inside the store. At first he thought it was a forklift hitting something metal.

It took about 45 minutes before the bathroom could be accessed to verify no one was inside.

The employees said in addition to the visible damage to the men’s restroom, there was some damage to the ladies room that shares a wall including mirrors knocked off the wall.

Despite volume uptick in July, ‘used truck sales are spotty’