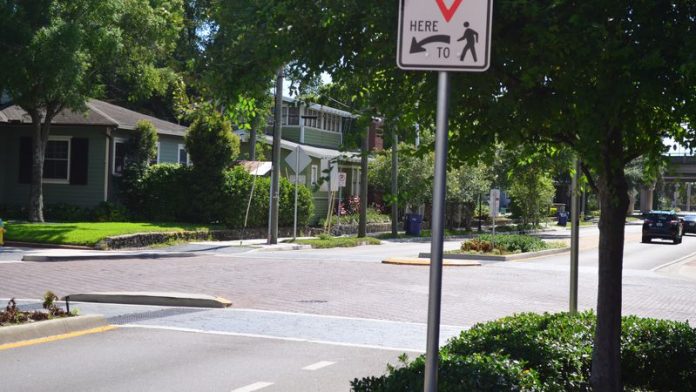 TAMPA — A man driving through Hyde Park Village on Sunday afternoon came to an intersection blocked by people with signs demonstrating against police brutality. He stopped for only a moment to yell at them before hitting the gas, witnesses said.

Tires squealed as the man drove his red pickup truck over a median and into the crowd, hitting a protest leader as she spoke to the group and sending her to the hospital.

“It was just horrifying,” said Katie Torpey, a waitress at a nearby restaurant who saw what happened.

The victim, Jae Passmore, is a political and community organizer and National Guard veteran. Passmore was knocked to the ground, suffering a concussion and injuries to her hip and right leg. She’ll be in a leg boot for the next four weeks.

Passmore finds significance in where she was injured as well as how. The demonstrators deliberately chose Hyde Park Village, the open-air shopping and entertainment district that has grown in popularity since it underwent a three-year, multi-million-dollar makeover.

“It just invigorates me to continue to go into these affluent communities where their discomfort is justification for murder,” Passmore said. “No one’s destroying your property, no one is putting your life in danger.”

Investigators from the Tampa Police Department are looking into the complaint, according to an online response to a request for information from the Tampa Bay Times. Passmore said a detective visited her mother’s house Tuesday but had not returned her calls Wednesday.

The Facebook page for the group Tampa Bay Rise Up seeks information from anyone who can describe the driver.

Brooke Friedland, manager at Irish 31 pub house and eatery, said she approached a police officer Sunday to report what she’d seen but was told officers wouldn’t be contacting demonstrators and would take it from there.

A video recording of the attack shows about 20 people blocking traffic at the intersection of West Swann and South Rome avenues in Hyde Park Village. At Irish 31, Sunday afternoon guests are eating on the patio as people stroll by with children and dogs.

A man can be heard, outside the frame, yelling, “Get out of the f–king road.” Passmore replies, “Make me.” The man was headed east on Swann in a pickup behind several cars, all stuck at the intersection, witnesses said. The demonstrators face the truck as Passmore continues, “I’m ready to die for what I believe in, so if you’re going to run me over, that’ll be what it is.”

She’s cut off by the sound of squealing tires and five seconds later, the truck speeds through the intersection, hitting Passmore and continuing down Swann. Several people scream.

Chad McLaughlin recorded the video from his front porch nearby. He started recording when he heard a demonstrator with a megaphone talking about the pro-police “thin blue line” flag he flies from his house. Then the truck came tearing through.

“I don’t know if he was trying to get around or go through them,” said McLaughlin, 57.

The video was posted to the website of WMNF-FM radio, which first reported the collision. The video was taken down later at Passmore’s request. She said she feared it would traumatize her family.

Friedland, 27, said her bartender and three other employees from Irish 31 ran out to give Passmore water and ice and see if she was okay. People came out from Goody Goody Burgers to help, too.

In the video, someone helps Passmore to her feet but she struggles to stand. On a megaphone, a protester yells, “Black lives matter,” and others join the chant. Some of their voices crack.

A friend at the protest drove Passmore, who said she is in her 30s, to the James A. Haley Veterans’ Hospital. Depending on the progress of her recovery, she may need to be readmitted.

Demonstrators have targeted Hyde Park Village during the past three weeks for “No Justice, No Peace, No Brunch” rallies, Passmore said, so people “who are isolated in a bubble of privilege can be shaken out of that and see what’s happening and join us in the fight.”

The demonstrators called on Mayor Jane Castor to fire Tampa police Chief Brian Dugan, accusing him of “dishonesty and lack of transparency” about the use of force during demonstrations downtown. Dugan has defended his department’s actions, saying officers mostly have provided protection to marchers and made arrests during one altercation June 3 only after objects were hurled at them.

“You take the time and energy to call protesters hypocrites,” Passmore said, “but let’s not forget an attempted murderer is still on the loose. What are you doing about that?”

Passmore said she didn’t contact Tampa police because, in her experience, they escalate matters.

She described an encounter with police outside an Ybor City bar in 2010, when she and some friends were just back from a combat tour in Iraq. A fight broke out and she was pushed by an officer as she was leaving, she said, then thrown to the ground and handcuffed when she asked for a badge number. Her squad leader intervened and she was released, she said.

Still recovering from her injuries, Passmore attended a meeting Tuesday night of the police Citizen Review Board to speak during the public comment section. Leaning her crutches against the podium, she recounted what happened at the Sunday demonstration and criticized statements Dugan made at a news conference Monday.

Dugan painted a picture then of a beleaguered police force, worn down by weeks of protests, media scrutiny, even an “ambush” Saturday in Ybor City where an officer suffered a face cut. The chief added, “If you are sitting in traffic and it’s being blocked, you need to step up and complain.”

Passmore told the board Tuesday, “What does he think a person who is angry in a car is going to do to a person standing in front of him? He knows exactly what he’s doing.”

Coverage of local and national protests from the Tampa Bay Times

HOW TO SUPPORT: Whether you’re protesting or staying inside, here are ways to educate yourself and support black-owned businesses.

WHAT PROTESTERS WANT: Protesters explain what changes would make them feel like the movement is successful.

WHAT ARE NON-LETHAL AND LESS-LETHAL WEAPONS? A guide to what’s used in local and national protests.

WHAT ARE ARRESTED PROTESTERS CHARGED WITH? About half the charges filed have included unlawful assembly.

CAN YOU BE FIRED FOR PROTESTING? In Florida, you can. Learn more.

HEADING TO A PROTEST? How to protect eyes from teargas, pepper spray and rubber bullets.

Look: Bear breaks into pickup truck in search for food