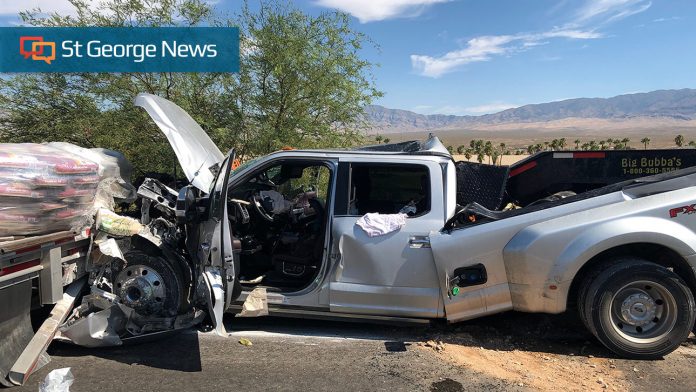 A truck rear ended a semi-truck in Mesquite, resulting in the transportation of both drivers to the hospital, Mesquite, Nevada, Aug. 14, 2020 | Photo courtesy of the Mesquite Fire Department, St. George News

ST. GEORGE — On Friday afternoon, a pickup truck traveling on Lower Flat Top Road rear-ended a semi-truck at high speeds, leading to the extrication of the pickup truck driver. The collision occurred north of the Flying J travel center.

Both drivers were transported to the hospital with moderate injuries.

“If they would have been severe, we would have gone to a trauma center,” Mesquite Fire Captain Spencer Lewis said. “When you see those pictures, I am slightly amazed that neither one of them went to a trauma center. There’s a lot of impact in there. Moderate injuries, which are surprising for that type of impact.”

The Ford pickup truck buckled under the pressure. The police never mentioned the speed to the fire department, but Lewis mentioned that there must have been speed involved from the severity of the crash.

He added that crashes between cars and semi-trucks can be some of the most dangerous crashes due to the fact that the semis are much taller than normal vehicles.

“It hits that deck sooner than a car does,” Lewis said. “It’s not quite as scary as a small SUV, especially cars, they go way under before they start slowing down.”

Ryne Williams was a Scholar-Athlete, earning CCAA Second Team All-Conference honors while playing Basketball at San Francisco State University. He is a graduate of the University’s College of Liberal and Creative Arts where he double majored in Broadcast and Electronic Communication Arts and History. A former host for the campus radio station, KSFS, Ryne previously worked for the Golden State Warriors and Oakland Raiders flagship radio station, 95.7 The Game.

Dynamic Truck and Trailer Suspension Market Is Staring At A Promising...

Look At This Mess As A Truck Shoves A Jeep Into...

Don’t you wish your pick-up looks like the Ford Ranger Thunder?