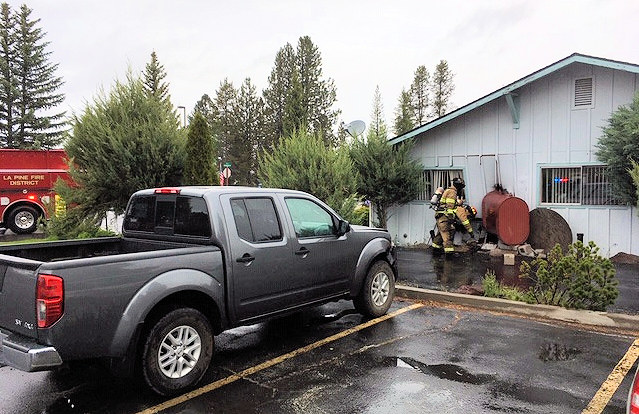 LA PINE, Ore. (KTVZ) – A driver’s pickup truck jumped a curb and crashed into the outside wall of a La Pine barber shop Monday morning,  also hitting a fuel oil tank and sending it partially into the structure, fire officials said. No injuries were reported.

La Pine Rural Fire Protection District firefighters responded shortly after 8 a.m. to the Cut N’ Up barber shop on Huntington Road on a report of a vehicle hitting a building.

Fire crews arrived to find a mid-sized pickup had jumped the curb and crashed into the building, also hitting the oil tank and pushing it partially into the structure. The barber shop was not open at the time, officials said.

Deschutes County sheriff’s deputies are investigating the circumstances that led to the crash.

Firefighters were able to shut the fuel lines running from the tank to the building’s heating system and monitored for any flammable vapors.

Fire Chief Mike Supkis said there was a leak, but firefighters were able to shut the valve and crimp the copper fuel line. A State Fire Marshal’s Office hazardous materials team from Eugene was canceled at that point, since the hazard was stabilized, he said, leaving cleanup and repairs to the property owner.

A heating contractor and heating oil vendor were called in to pump off the remaining heating oil and remove the fuel tank, officials said.