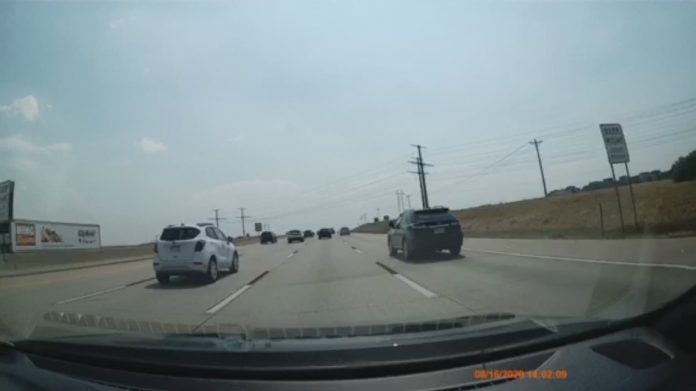 The motorcycle driver was taken to a hospital, and all southbound lanes of I-25 were closed for a time.

DOUGLAS COUNTY, Colo. — The Colorado State Patrol is investigating an incident on Sunday afternoon in which a pickup truck ran a motorcycle off Interstate 25 and into a barrier in the Castle Pines area.

All southbound lanes of I-25 were closed just south of Happy Canyon Road about 2 p.m. for the crash and reopened after 3 p.m.

A CSP spokesperson said the crash was between a pickup and a motorcycle, and that there was a report of a road rage incident between the two.

A 9NEWS viewer shared dash cam video below that shows the crash: three motorcycles are riding together in the left lane when a black pickup moves across all lanes of traffic from the right lane and swerves into one of the motorcycles. The motorcycle then hits the barrier, loses control and crashes.

Warning: The video below is graphic and may disturb some viewers:

The video doesn’t show what preceded the crash.

The video then shows the pickup driving back across I-25 onto the right shoulder and out of sight. One of the other motorcycles follows it. CSP said that the driver of the pickup stayed on scene.

RELATED: 1 dead in crash between SUV, semi in Commerce City

RELATED: CSP looking for witnesses to I-25 road rage incident

Truck crash on Hume Highway continues to be managed by Harden...