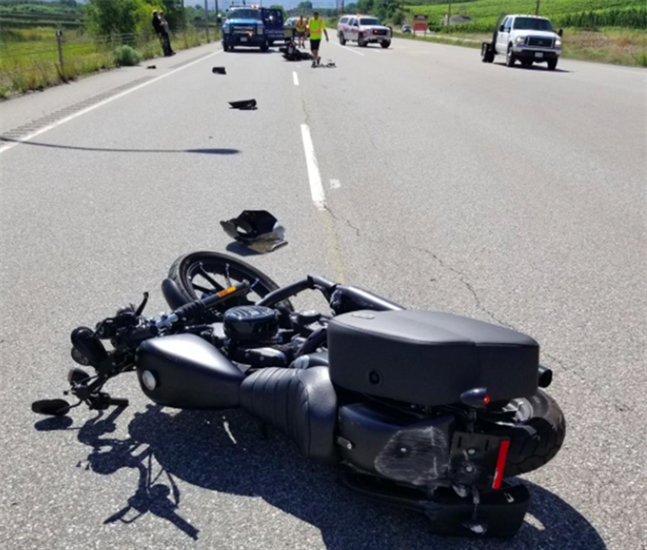 A collision between a pickup truck towing an RV trailer and two motorcyclists on Highway 97 near Osoyoos sent the two people on the bikes to hospital, Thursday, July 16, 2020.


A collision between a pickup truck towing an RV trailer and two motorcyclists on Highway 97 near Osoyoos sent the two people on the bikes to hospital yesterday morning.


RCMP responded to the collision on Highway 97 at Fruitvale Way near Osoyoos at around 9:35 a.m. yesterday, July 16, according to an RCMP media release.


Police say the motorcyclists were overtaking the truck pulling the RV trailer on a four-lane stretch of the highway when the truck and trailer suddenly merged left to make a left turn on Fruitvale Way, striking the motorcycles and knocking the drivers to the ground.


The 59-year-old driver of the pickup, a Calgary man, faces a charge of driving without due care and attention.


“The Osoyoos RCMP would like to remind driver’s that during the warmer months there is an increase of motorcyclists on the road,” RCMP spokesperson Sgt. Jason Bayda said the release.


“It is imperative driver’s know their surroundings. Look twice for motorcyclists before making turns or when changing lanes as they are smaller and much harder to see.”


To contact a reporter for this story, email Steve Arstad or call 250-488-3065 or email the editor. You can also submit photos, videos or news tips to tips@infonews.ca and be entered to win a monthly prize draw.


We welcome your comments and opinions on our stories but play nice. We won’t censor or delete comments unless they contain off-topic statements or links, unnecessary vulgarity, false facts, spam or obviously fake profiles. If you have any concerns about what you see in comments, email the editor in the link above.

Look At This Mess As A Truck Shoves A Jeep Into...

USPS must give details to Washington about changes in mail

Surgical gowns and N95 masks go up in flames after fire...

A truck continues several miles despite rollover during chase | KOLR