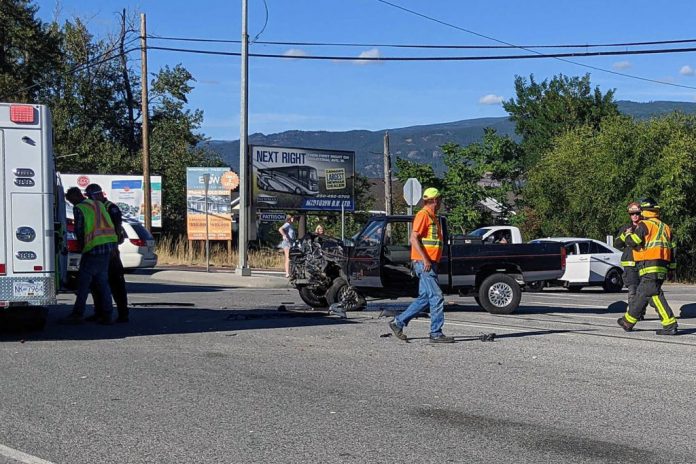 Northbound traffic on Highway 97 is backed up near Warren Avenue following a collision between a pickup truck and a semi-truck that occurred at approximately 4:30 p.m Wednesday, Sep. 2.

The middle-aged male driver of the pickup was taken to hospital by paramedics as a precaution. He is not believed to have any serious injuries, according to Penticton Fire Department Capt. Wes Swaren.

No damage was visible on the semi-trailer at the scene.

According to witnesses at the scene, the semi-truck was pulling out of the intersection when the pickup truck “didn’t seem to react” to the semi before colliding with the end of the semi-truck.

RCMP have begun an investigation into the collision and Penticton Fire Dept. personnel are clearing the scene of the crash.

A tow truck arrived on scene to remove the damaged pickup truck around 5 p.m.

To report a typo, email: editor@pentictonwesternnews.com.

Man, 49, is arrested over the deaths of four police officers...