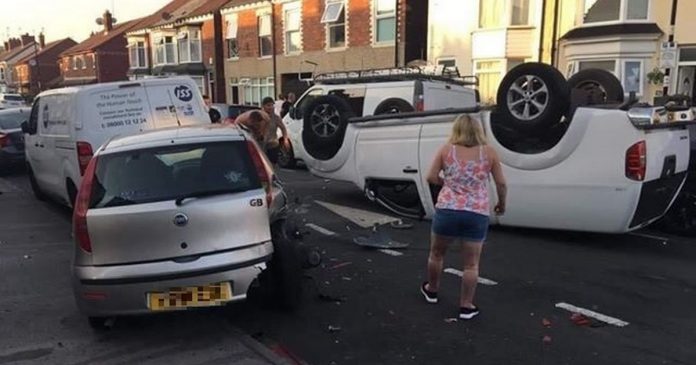 A pickup truck has flipped upside down in a residential street in west Hull after reportedly hitting nine other vehicles parked at the side of the road.

The accident happened at just after 8pm on Tuesday, August 11, in De La Pole Avenue, which runs between Spring Bank West and Anlaby Road.

Neighbours reported seeing the white truck driving down the street before hitting several other parked cars, including a Fiat Punto and a Ford Fiesta, and then rolling on to its roof.

One man, who heard a loud bang from his home in Parkfield Drive two streets away, said there had been four people in the car at the time, with one of them having been apprehended by residents before police arrived.

“I heard the bang and came down and just saw carnage,” he said.

“There was a similar crash in Parkfield Drive six or seven years ago where someone drove into a house, but nothing like this.

“This is the worst one I’ve seen in years.”

He said he had spoken to his neighbours in De La Pole Avenue, including the owners of the parked cars, saying they were “livid”.

He said police had attended the scene and dealt with the incident with no one involved having suffered any serious injuries.

Anyone with information should call police on 101.

28 people injured after their pickup van rams into standing truck...